From HSBC to Adidas, more fall victim to wanton vandalism 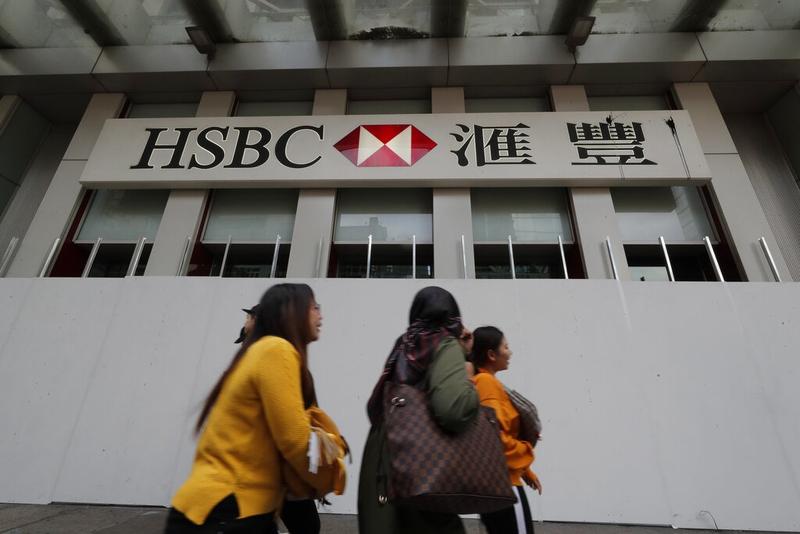 A temporary wall is built in front of a branch of HSBC after the bank's glass is vandalized by protesters in Hong Kong, Dec 25, 2019. (LEE JIN-MAN / AP)

HONG KONG - Three days after being trashed by rioters, the entrance of a branch of HSBC in Mong Kok was still completely covered by white protective planks on Friday.

The bank announced in the morning that the branch will remain suspended until further notice.

On Christmas Eve, large groups of masked rioters took to the streets and thronged into major shopping malls. Although seemingly peaceful at first, they quickly went on the rampage by assaulting police and passersby, storming shops and restaurants, and throwing petrol bombs into a police station.

During the past months, rioters brutally attacked anyone speaking against them, and shops and restaurants that do not share the same political view or even just not show enough support also became their target

The HSBC outlet at the junction of Nathan Road and Argyle Street was not be spared as rioters smashed its glass windows, spray-painted walls and set a fire.

"We are saddened and disappointed by the acts of vandalism and damage directed at our branch in Mong Kok," HSBC spokesperson said in a statement.

Given the violent incidents, some HSBC outlets in Causeway Bay reinforced protective facilities at the entrances during the just-finished Christmas holiday.

Apart from the HSBC branch, the Mong Kok branch of Hang Seng Bank, a Hong Kong-based bank controlled by the HSBC Group, was also vandalized on Tuesday night.

HSBC was not the only company suddenly caught off unprepared in the prolonged chaos in Hong Kong.

An Adidas store in Langham Place was also trashed by rioters on Christmas Eve.

As social unrest stemming from the extradition bill incident has dragged on for more than six months in the global financial hub, more and more businesses, seemingly irrelevant at first, fell victim to wanton vandalism of rioters. 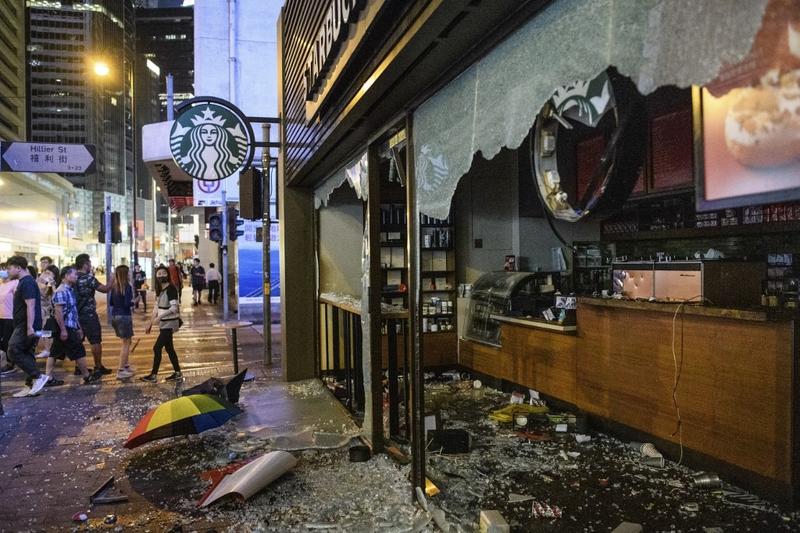 A Starbucks coffee shop is seen vandalized after protesters left the scene in the Sheung Wan area of Hong Kong on Nov 2, 2019. (ANTHONY WALLACE / AFP)

From US cafe brand Starbucks and fast-food company McDonald's to Japanese fast-food chain Yoshinoya, the list of targeted firms is still growing.

During the past months, rioters brutally attacked anyone speaking against them, and shops and restaurants that do not share the same political view or even just not show enough support also became their target. Outlets of snacks store Best Mart 360, Maxim's Cakes and Genki Sushi were among the hard-hit shops.

A food stand in Mong Kok came under attack on Tuesday night as its workers refused rioters' request to offer the CCTV footage.

Quite a number of shops along the Mong Kok section of the Nathan Road, an area that has witnessed violent incidents in Hong Kong, were totally clad in "armor." In front of one shop shielded by high planks, customers could barely identify the door without the help of a sign.

"They (rioters) are savages and destroy everything," said an newspaper stand owner surnamed Yu, who witnessed how rioters rampaged in the street during the past months.