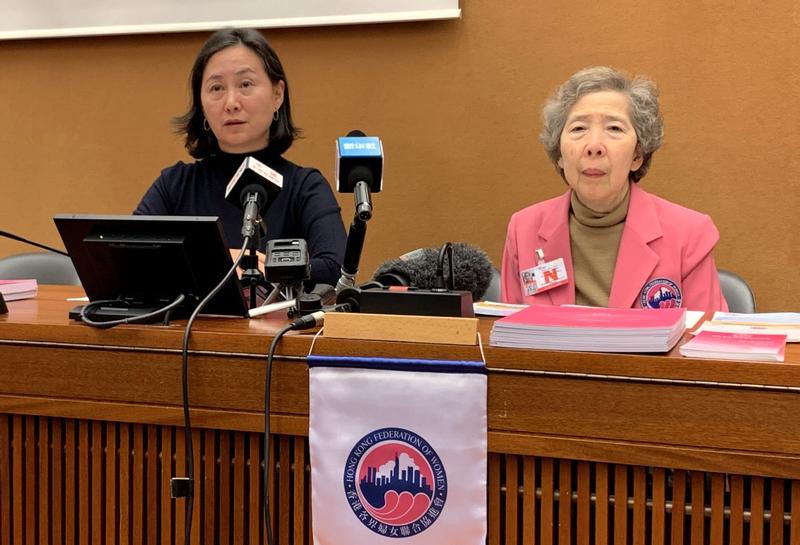 Pansy Ho Chiu-king (left) and Annie Wu Suk-ching at the press conference at the 42nd session of the UN Human Rights Council in Geneva, Switzerland on Sept 10, 2019. (PHOTO PROVIDED TO CHINA DAILY)

Two prominent Hong Kong women want to tell the world that the violent protests in the Hong Kong Special Administrative Region these past few months have marred the stability and prosperity of the global financial hub.

Pansy Ho Chiu-king, chairwoman of the Hong Kong Federation of Women, said she wants to speak up about the truth in Hong Kong.

Hong Kong people are afraid to venture outside due to the violence, and businesses－especially small and medium-sized enterprises－have been hit hard

Pansy Ho, chairwoman of the Hong Kong Federation of Women

Ho and Annie Wu Suk-ching, a founding member of the federation, were scheduled to speak Tuesday afternoon at the 42nd session of the UN Human Rights Council in Geneva, Switzerland.

Speaking to the media on Monday, Ho said that she spent the past three months feeling puzzled and distressed. The daughter of Hong Kong and Macao-based businessman Stanley Ho, she said many Hong Kong people are afraid to venture outside due to the violence, and businesses－especially small and medium-sized enterprises－have been hit hard.

"We hope to bring back peace and the rule of law to our society," Ho said.

She felt puzzled as to why the overseas media never reported on the fear caused by the riots among the ordinary people living in Hong Kong.

Ho expressed that she is not pointing fingers and it is true that there are differences in society that deserve attention.

"But we must try to look for a solution in a peaceful manner and with mutual respect instead of escalation," she said.

Ho praised Hong Kong police for their professionalism, saying, "They did the best they could."

Wu, also a businesswoman and daughter of James Tak Wu, founder of Maxim's Catering, said that the actions by mobs who damaged Hong Kong's subway system, blocked the airport and damaged public facilities, have sullied the city's global reputation. "It's dangerous because people think that Hong Kong is no longer safe," she said.

In her written remarks presented to the human rights council, Ho said the foundation of Hong Kong's prosperity and stability has been shaken to the core by violent protests over the past two months.

Spreading misinformation across different platforms locally and internationally, instigating disturbances in public places, destroying public and government property, engaging in acts with the intention to cause bodily harm to the police and private citizens, vilifying the police to create public hatred and engaging in unlawful acts to provoke reactions from police are all part of a grand scheme created by the radical protesters to undermine the Hong Kong government's authority to maintain social order, according to the remarks.