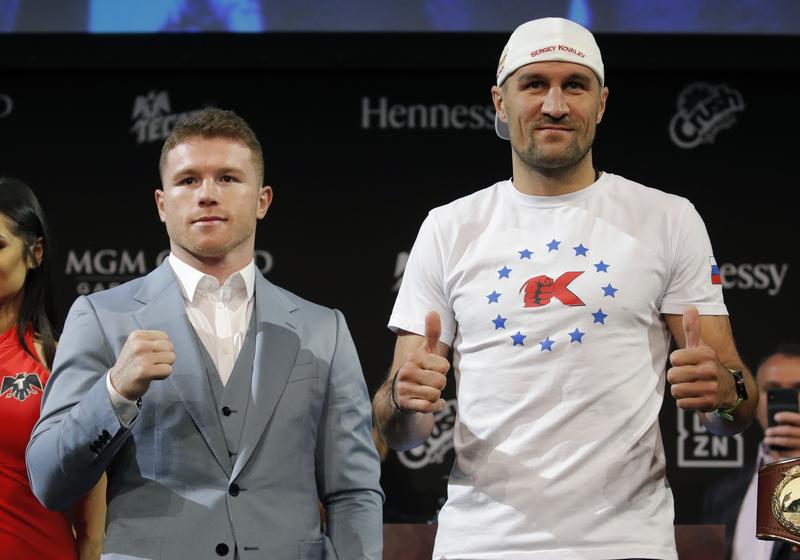 LAS VEGAS — Canelo Alvarez didn't have to take the risk. Not at light heavyweight, and not against a puncher like Sergey Kovalev.

"I'm entering his zone of comfort but we're ready for this. We have the intelligence and skill to beat Kovalev and win the fight."

A third fight with Gennadiy Golovkin was there for the asking. There were other fights against lesser opponents that would have given Alvarez the same kind of payday he's grown used to collecting every time he puts on the gloves for real.

But on Saturday night the Mexican middleweight champion will go into the ring looking for a title in his fourth weight class, this time at 175 pounds. He'll do it against Kovalev, who packs a lot of power in his punches even if some suspect he's been in the ring a bit too long for his own good.

And while Alvarez is a big favorite, even he doesn't know how he'll react to being hit by a full-fledged light heavyweight. That's the intrigue that sells the fight — but it potentially also makes for a risky evening for Alvarez.

"You don't know until you get in the ring," Alvarez said through an interpreter. "Going up two divisions is a big challenge in itself."

It's a challenge Alvarez believes he can handle, one that might be easier since Kovalev is 36 and has struggled in recent fights. The Russian once ruled the light heavyweight division, knocking out almost everyone he got in the ring with, but now chases what could be his last big payday.

While Alvarez will be noticeably smaller in the ring, he brings hand speed, body punching prowess and the unmistakable confidence of a fighter who has been there before into the fight at the MGM Grand Garden.

"I'm entering his zone of comfort but we're ready for this," Alvarez said. "We have the intelligence and skill to beat Kovalev and win the fight."

The bout is the third for Alvarez under an 11-fight deal he signed with streaming service DAZN that will pay him a staggering JUS$365 million over five years. At 29 he's in his prime and arguably the biggest attraction in boxing — not to mention Mexico's most high-profile athlete.

Alvarez has lost only once, a 2013 defeat to Floyd Mayweather Jr. that he blames on inexperience and would become a champion in four weight divisions should he defeat Kovalev. He's at or near the top of most pound-for-pound lists, a fighter with hand speed and power but also the ring smarts gathered over a pro career that began in Mexico when he was just 15.

The only real question against Kovalev is if he can take punches from a bigger fighter and make Kovalev respect his punching power.

"We know what he has and what this challenge represents," Alvarez said. "We know he has long arms, his jab is really strong, and he knows how to move, but we've trained for this. He's my strongest opponent without a doubt and it's a huge risk for me but we're ready."

Kovalev says he's ready, too, and not just to collect the reported US$12 million purse that is the largest of his career. He fought just 10 weeks ago in his native Russia and was in trouble against Anthony Yarde before finally stopping him, and says he feels reinvigorated under new trainer Buddy McGirt.

To win, Kovalev must be able to make Alvarez feel the power that led to 29 knockouts in 38 fights — and must prove he won't fade in the late rounds as he did in his draw in the first fight with Ward. But he's been in big fights before and shouldn't be overwhelmed by the moment.

"Canelo is really talented and really famous, so this is a lot of pressure to me," Kovalev said. "But believe me, I'm in boxing already since I was 11 years old and I should be fine. It's nothing for me. I should just get inside the ring and do my best job."