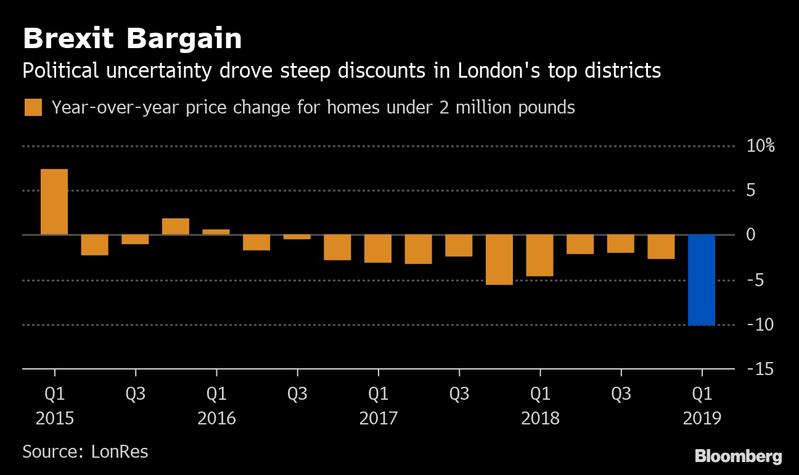 Homebuyers took advantage of Brexit uncertainty to get steep discounts in London’s fanciest neighborhoods in the first quarter.

Prices for homes under 2 million pounds (US$2.6 million) in the capital’s most sought-after districts fell the most in a decade in the three months through March as politicians failed to agree on a deal for the UK’s orderly withdrawal from the European Union. Transaction volumes rose sharply as more purchasers piled into the market to take advantage of the potential for reductions, according to data from LonRes.

Buyers got an average 13.4 percent discount on properties in the area known as prime central London, according to LonRes

“People started to realize there were some good deals to be had while Brexit uncertainty rumbled on,” Marcus Dixon, head of research at LonRes, said in an interview. “If sellers start to feel nervous about what’s happening, they’re going to be more open to accepting lower offers.”

ALSO READ: London, HK, NYC are no longer immune to the housing slump

Buyers got an average 13.4 percent discount on properties in the area known as prime central London, according to LonRes. Overall, just under half of sellers cut the price of their properties before finding a buyer, according to the data provider.

London’s priciest homes — those valued at more than 5 million pounds — saw a similar effect. The increase to sales tax on property deals, higher taxes for second-home owners and a surplus of stock have all hurt the luxury market in recent years.

Properties over 5 million pounds saw prices decrease 6.6 percent and sales rise 3 percent in the period year-on-year, the first gain in more than a year, the data show.