China publishes white paper on progress of women's cause

BEIJING — China on Thursday issued a white paper on the progress of women's cause in the past 70 years since the founding of the People's Republic of China.

The white paper, titled "Equality, Development and Sharing: Progress of Women's Cause in 70 Years Since New China's Founding," was released by the State Council Information Office.

As the Chinese nation is rising and growing richer and stronger, Chinese women's social status has undergone enormous changes

The founding of the People's Republic of China in 1949 ushered in a new era for women in China, changing their social status from an oppressed and enslaved group in the past thousands of years to masters of their own fate, the white paper said.

As the Chinese nation is rising and growing richer and stronger, Chinese women's social status has undergone enormous changes, it said.

As China's development has entered a new era, promoting gender equality and women's overall development at a higher level not only meets opportunities, but also has a long way to go, the white paper said.

Under the guidance of Xi Jinping Thought on Socialism with Chinese Characteristics for a New Era, China will always adhere to safeguarding and improving women's livelihoods, promote women's all-round development, and lead hundreds of millions of women in working for national rejuvenation, it said.

China has promulgated laws and regulations such as the labor law, the employment promotion law, the labor contract law and the law on contracting rural land to fully protect women's economic rights and interests, especially the right to equal employment, ensuring equal pay to men and women for equal work and eliminating gender discrimination in employment, the white paper said.

Women account for 40 percent of the labor force, the document said, adding that women have made up 55 percent of the population doing business online.

Women's capabilities in contributing to economic and social development have been significantly enhanced over the past 40 years of reform and opening-up, which has been demonstrated in politics, economy, science and technology, education, culture and health, it said.

Chinese scientist Tu Youyou, winner of the 2015 Nobel Prize for the discovery of artemisinin, at her home in Beijing. (PHOTO / XINHUA)

Since the early years of New China, the state has drawn up and implemented laws to guarantee that women share equal rights with men to vote, to be elected, and to participate in the administration of state affairs, the white paper said.

"Over the past four decades since the reform and opening-up, steady progress has been made in enhancing China's socialist democracy, which has provided new opportunities and channels for women to participate in politics," it said.

In 2017, women accounted for 52.4 percent of public servants newly-recruited by the central government organs and their affiliates, and the proportion was 44 percent among local governments, the document said.

In 2018, women represented 22 percent of the leadership in national public institutions, 1.6 percentage points higher than in 2015, it added.

The gender gap in the nine-year compulsory education has been basically eliminated, said the white paper.

The net primary school enrollment rates of boys and girls were both 99.9 percent in 2017. The proportion of girls in regular primary schools and regular junior high schools was 46.5 percent and 46.4 percent respectively in 2017, 18.5 and 20.8 percentage points higher than those in 1951 respectively, said the white paper.

China strongly supports women as well as women's organizations to actively make friends, build friendships, learn from each other and promote common development with women around the world, said in the white paper.

China has been actively participating in and hosting international conferences and promoting global women's development, and seriously fulfills international obligations and reflects the responsibility of a major country, read the document.

The white paper also noted the increasingly evident role of Chinese women in foreign affairs, adding that China had 2,065 female diplomats, accounting for 33.1 percent of the total, as of October 2018.

The level of ensuring maternity services and rights for women has increased significantly. The number of people participating in maternity insurance reached 200 million in 2018, among which, the number of women was 89.27 million, the document said, adding that China has extended statutory maternity leave from 90 days to 98 days.

"With social security institutionalized, Chinese women have an ever-stronger sense of fulfillment, happiness and security," it said. 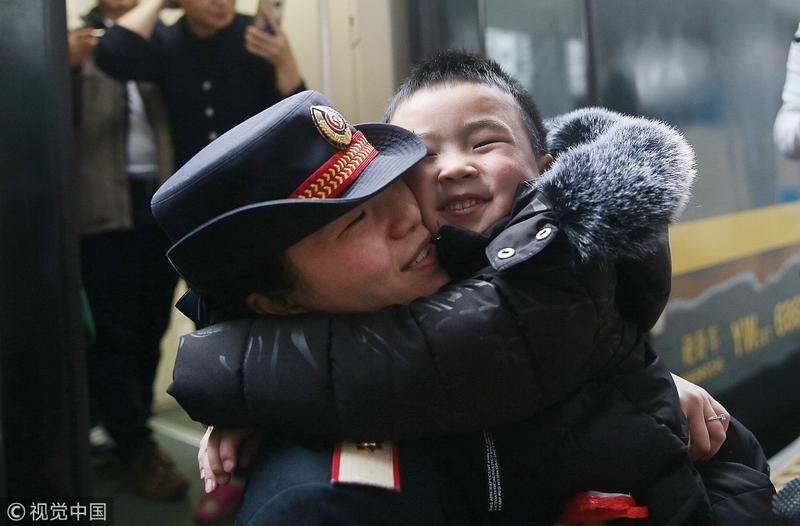 A boy hugs his mother tightly as he only has three minutes to meet her when the train parks on the platform in Hehang Station, Central China's Hunan province, Feb 10, 2018. (PHOTO / VCG)

China has established a marriage and family system to improve the equality between men and women, and a policy system to support family and women's development, according to the white paper.

China has put efforts in coordinating social resources to support family education service, emphasizing the unique role of women in cultivating family virtues, and has seen a more equal, harmonious, and civilized family relationship in the new era, the white paper said.

Rural women who received free cervical and breast cancer screening reached 85 million and 20 million, respectively, by the end of 2018, said the white paper.

Women's average life expectancy grew to 79.4 years in 2015, increasing 42.7 years from that in 1949 when the People's Republic of China was founded.