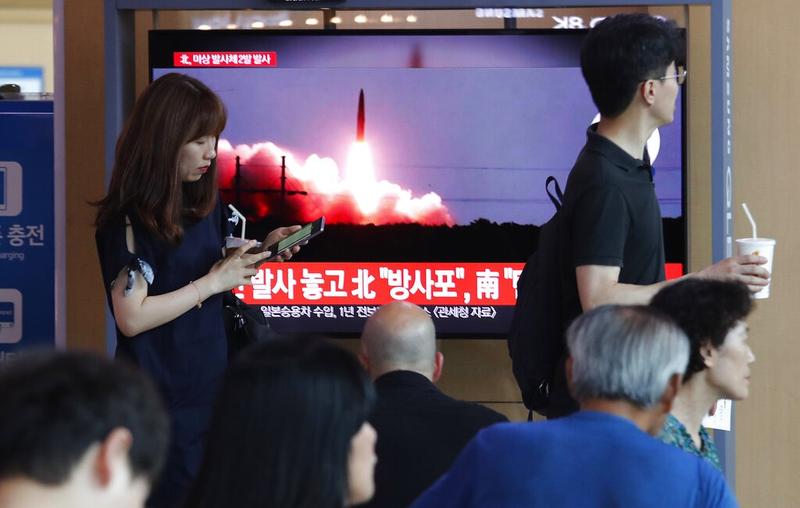 The move came while the DPRK lashed out at the United States and the ROK for continuing military exercises which the DPRK says could derail fragile nuclear diplomacy, AP reports.

The projectiles, presumed to have been short-range ballistic missiles, were launched at 5:24 am and 5:36 am local time each near the DPRK's southwestern county of Kwail in South Hwanghae province, the JCS said in a statement.

Both traveled eastward about 450 km at an altitude of some 37 km. The projectiles flew across the Korean Peninsula before splashing into the eastern waters. Their maximum speed was more than Mach 6.9. 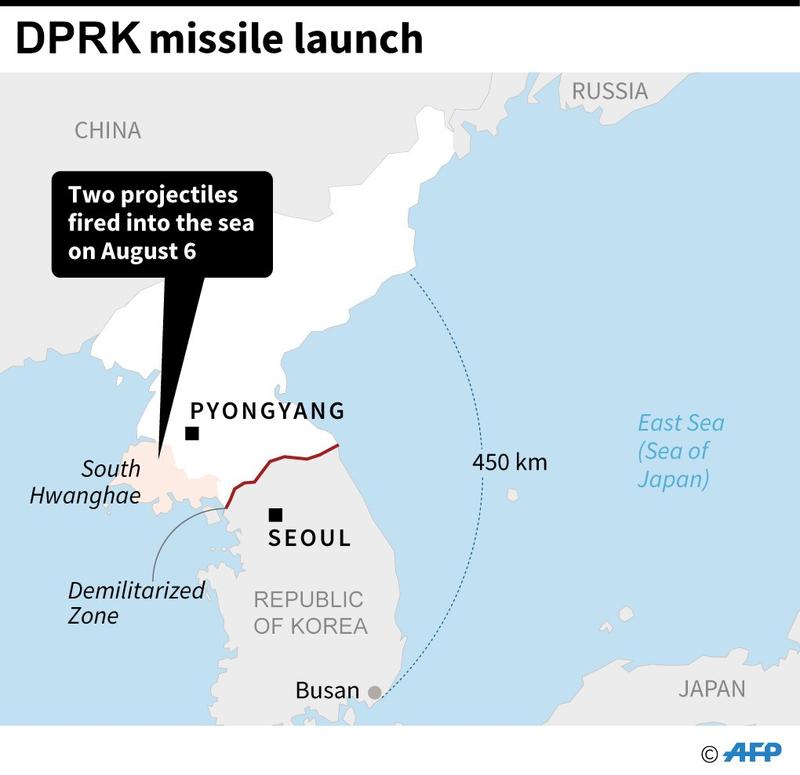 This AFP graphic shows a map locating South Hwanghae province on the DPRK's west coast, where two projectiles were fired into the East Sea, or the Sea of Japan, on Aug 6, 2019.

The intelligence authorities of the ROK and the United States saw the projectiles bearing the similar flight features to the short-range ballistic missiles the DPRK fired off on July 25, the JCS said.

The exact type of the projectiles was under analysis, the JCS added.

The JCS said ROK military was maintaining defense posture and closely monitoring relevant situations in preparation for an additional launch.

ROK's military alerted reporters to the launches minutes before DPRK's Foreign Ministry denounced Washington and Seoul over the start of their joint exercises on Monday, AP reports.

The ROK-US computer-simulated command post exercise (CPX) was forecast to last for about three weeks.

We remain unchanged in our stand to resolve the issues through dialogue. But the dynamics of dialogue will be more invisible as long as the hostile military moves continue

The military drill is "a flagrant violation of June 12 DPRK-US Joint Statement, Panmunjom Declaration and September Pyongyang Joint Declaration," a spokesperson of DPRK’s Foreign Ministry was quoted by the official Korean Central News Agency as saying.

"All the US-South Korea joint military exercises which have been annually conducted during the past 65 years were unexceptionally aggressive war exercises simulating the surprise and preemptive attack on the DPRK."

"What is more serious is that the US increases hostile military tension against us by deploying a large amount of latest offensive military equipment in South Korea, in disregard of its commitment to suspend joint military exercises made at summit level on such occasions as the Singapore DPRK-US summit and the Panmunjom DPRK-US summit," the spokesperson said.

"We have already warned several times that the joint military exercises would block progress in the DPRK-US relations and the inter-Korean relations and bring us into reconsideration of our earlier major steps."

Because of the military drill, "we are compelled to develop, test and deploy the powerful physical means essential for national defense," the spokesperson said.

"We remain unchanged in our stand to resolve the issues through dialogue. But the dynamics of dialogue will be more invisible as long as the hostile military moves continue," the spokesperson said.

Chung Eui-yong, top national security adviser for ROK President Moon Jae-in, convened an emergency meeting with the intelligence agency chief and the defense minister, according to the presidential Blue House.

Japan said the projectiles did not reach its territorial waters or exclusive economic zone, according to AP. Tokyo's defense minister, Takeshi Iwaya, said DPRK's efforts to advance its missile capabilities are a serious threat to the region.

Later Tuesday, US Defense Secretary Mark Esper said the United States will not overreact to a series of missiles launches by the DPRK in recent weeks and would keep the door open to talks with Pyongyang, Reuters reports. He added that the missiles launched on Tuesday were short-range ballistic ones and he would be speaking about the DPRK with his counterparts in Japan and the ROK during his upcoming visit to both countries.

The DPRK's launches came a day after Moon, a dovish liberal, made a nationalistic call for economic cooperation between ROK and the DPRK while denouncing Japan's imposition of trade curbs on ROK amid an escalating diplomatic row. Moon's comments drew instant criticism from conservatives, who accused the president of ignoring DPRK's weapons tests.

The DPRK last week also conducted two test firings of what it described as a new multiple rocket launcher system.

(With AP and Reuters inputs)