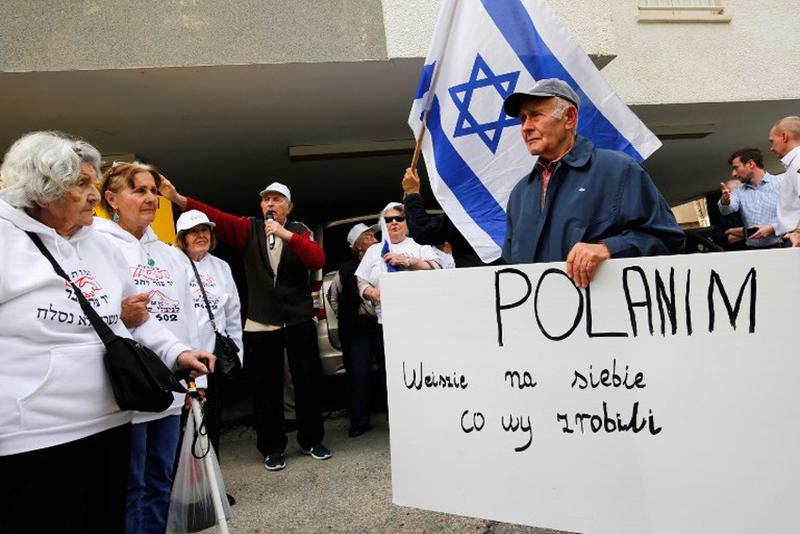 This Feb 8, 2018 photo shows holocaust survivors holding banners and waving an Israeli flag during a protest in front of Polish embassy in Tel Aviv against a controversial bill passed by Polish senate. (GIL COHEN-MAGEN / AFP)

WARSAW – Poland's deputy culture minister backed away on Monday from an academic's proposal to build a so-called "Polokaust" museum for Polish victims of the Nazis, at a time when Warsaw faces international pressure over a law imposing jail terms for suggesting Polish complicity in the Holocaust.

Poland's nationalist ruling Law and Justice Party (PiS) says its measure passed this month, which imposes jail sentences of up to three years for those who suggest Poland was complicit in Nazi crimes, is necessary to protect the honour of their nation.

Using the concept of 'Polokaust' in a way I understand it would hurt Jewish sensitivity and unnecessarily provoke more tension between our nations. The Polokaust museum will not be built.

Marek Kochan, a writer and academic, coined the term "Polokaust" earlier this month to suggest that Poles were similar targets of Nazi crimes as Jews, and said a museum should quickly be built to commemorate them. Last week, Deputy Culture Minister Jaroslaw Sellin backed the proposal.

However, the idea drew criticism, including from the dean of the university where Kochan teaches, who called it harmful. On Monday Sellin rowed back, saying the idea would antagonise Jews.

"It is a complete misunderstanding," Sellin told Rzeczpospolita daily when asked if he wants the museum to be built.

"Using the concept of 'Polokaust' in a way I understand it would hurt Jewish sensitivity and unnecessarily provoke more tension between our nations. The Polokaust museum will not be built," he also said.

Israel and the United States have spoken out forcefully against the Holocaust law, which they say could criminalise truthful scholarship about the role some Poles played in German crimes. Opponents accuse the PiS of politicising World War Two to build a nationalist sense of grievance among the population.

More than 90 percent of the 3.2 million Jews living in pre-war Poland were murdered by the Nazis during their occupation of the country, accounting for about half of all Jews killed in the Holocaust. Jews from other parts of Europe were sent to be murdered at death camps such as Auschwitz and Treblinka, built and operated by Germans in Poland.

The Nazis also killed 1.9 million non-Jewish Polish citizens, although there was never a plan to exterminate all of them, as there was with Jews. 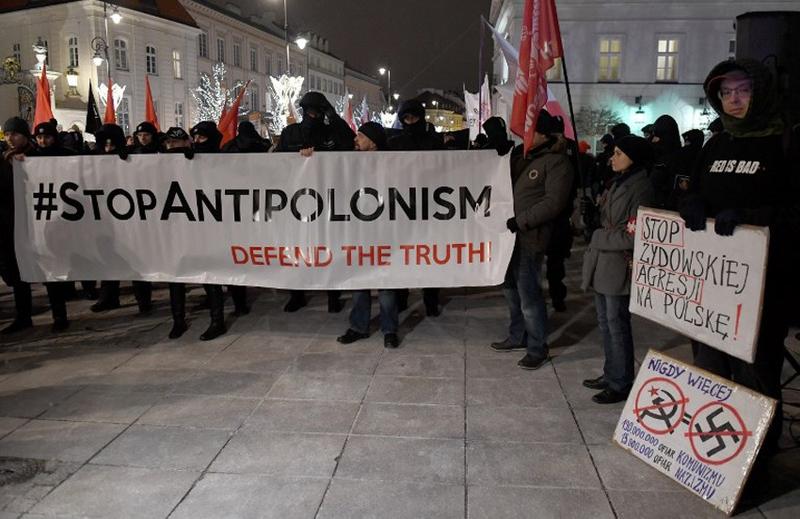 In this Feb 5, 2018 photo, far-right protesters hold a banner during a demonstration to support a controversial new Polish bill regarding the Holocaust and the definition of Nazi death camps outside the presidential palace in Warsaw. (JANEK SKARZYNSKI / AFP)

Sellin said that the law imposing jail terms for suggesting Poland was complicit in the Holocaust will not be used until the Constitutional Tribunal determines whether it is compatible with the constitution.

The head of the Constitutional Tribunal, Julia Przylebska, has been appointed by the PiS. The European Union accuses Poland's ruling party of breaching the rule of law to impose control over the judiciary.

Many Poles believe their nation behaved honourably for the most part during the Holocaust. But research published since 1989 has sparked a painful debate about responsibility and reconciliation.

A 2000-2004 inquiry by Poland's state Institute of National Remembrance (IPN) found that on July 10, 1941, Nazi occupiers and local inhabitants colluded in a massacre of at least 340 Jews at Jedwabne. Some victims were burned alive after being locked inside a barn.

The revelation disturbed many Poles' belief that their country was fundamentally a victim during a war in which a fifth of the nation perished. Some Poles still refuse to acknowledge the IPN's findings.