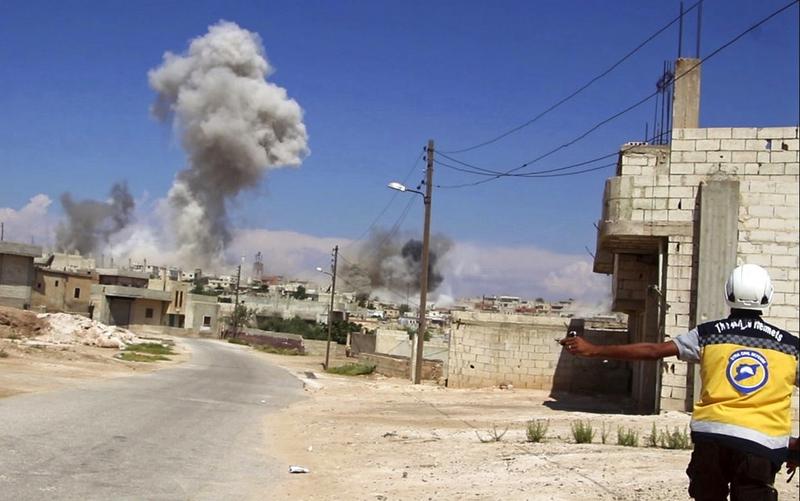 1,060 airstrikes and ground shelling have targeted rebel-held areas in Idlib and the nearby countryside of Hama over the past 72 hours

the Syrian Observatory for Human Rights

The Syrian Observatory for Human Rights said the rebels of the Turkey-backed al-Jabha al-Wataniya lil-Tahrir, or the National Front for Liberation, also attacked a position of the Syrian army in the northern countryside of Hama.

The London-based watchdog said 1,060 airstrikes and ground shelling have targeted rebel-held areas in Idlib and the nearby countryside of Hama over the past 72 hours.

Meanwhile, state news agency SANA said the Syrian army carried out "intensive shelling" on positions of the al-Qaida-linked Nusra Front in the northern countryside of Hama.

The army also destroyed mortar shells' launchers used by the rebels to target government-held areas in Hama, where at least 10 were killed a day earlier in the town of Mahardah by the rebels' shelling, SANA said.

The escalation is seen as a prelude to the anticipated government military campaign on Idlib, the last major rebel stronghold in Syria.

The Syrian army, backed by Russia and Iran, has been pushing for an assault on Idlib to eliminate the rebels in the province, which would mean a practical end to the seven-year-long insurgency in the country.

On Friday, the leaders of Iran, Turkey, and Russia met in Iran to discuss the situation in Idlib, yet without achieving tangible results amid differences.

Iran and Russia supported the Syrian operation in Idlib, while Turkey, a backer of an array of rebels in Idlib, desired a cease-fire.

Earlier in the day, the pro-rebel watchdog said the Turkish forces sent reinforcements to the Turkey-run observation posts in Idlib after the tripartite summit in Iran.

The 12 Turkish observation posts were established in Idlib as part of a three-way agreement with Russia and Iran under the Astana peace process in October 2017.

Idlib has emerged as the main destination and stronghold for the rebels fleeing other parts of Syria through deals or surrender.

Several Turkey-backed rebel groups are located in the province near the Turkish border, but the most powerful group there is the Hayyat Tahrir al-Sham, or the Levant Liberation Committee (LLC), with the al-Qaida-linked Nusra Front as its backbone.

For the Syrian army, securing Idlib would almost deal a definite defeat to the over seven-year-long insurgency against the administration of President Bashar al-Assad.

Idlib is also strategically important as it shares a border area with Turkey to the north. It's also close to the coastal province of Latakia, the hometown of Assad which contains a Russia-run air base repeatedly targeted by rebel drones launched from Idlib.

The capital city of Idlib also lies close to the international road linking the capital Damascus with Aleppo Province in northern Syria.

Around 3 million people are living in Idlib, including those evacuated from many other areas during the surrenders of the rebels.