By Zhang Li, Shi Ruipeng in Nanning and Ma Zhiping in Haikou 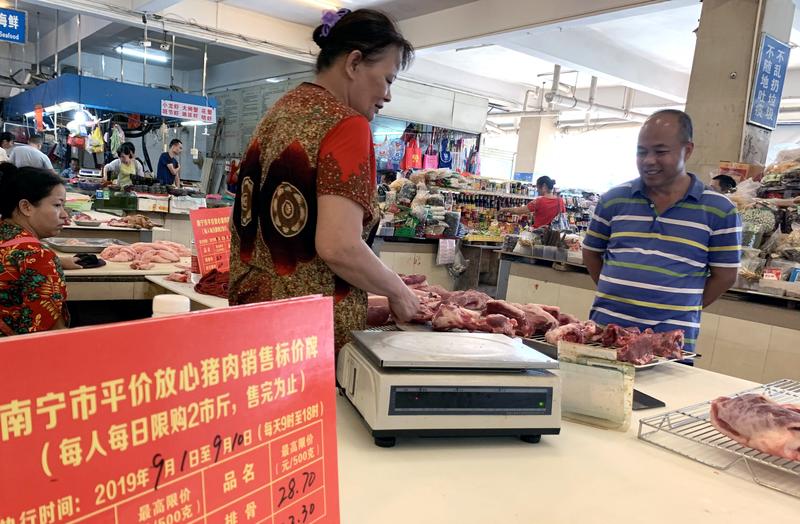 A number of local governments are moving to stabilize the pork market and ensure supply as the average price has kept rising since last year's outbreak of African swine fever.

Pork prices nationwide have risen steadily this year following last year's outbreak of African swine fever, which decimated the pig population in some places and led to price spikes

The average wholesale price of pork hit 34.6 yuan (US$4.80) per kilo last week－a notable 8.9 percent increase over the previous week, the Ministry of Commerce announced on Tuesday.

The ministry also said it would tap the government's frozen meat reserves, including pork, beef and mutton, and push it into the market to stabilize supplies.

The appetite for pork has risen in China for decades. In the mid-1970s, Chinese people on average consumed 8 kg of pork a year. Today, the figure is around 39 kg per person, according to the US Department of Agriculture. China now consumes roughly half the world's pork.

Pork prices nationwide have risen steadily this year following last year's outbreak of African swine fever, which decimated the pig population in some places and led to price spikes.

So far, the epidemic has been largely controlled, and authorities have launched measures to ensure sufficient supplies.

In Nanning, Guangxi Zhuang autonomous region, the government announced on Saturday that it was placing a price cap on pork sold at 10 large farmers' markets across the city. Residents are allowed to buy up to 1 kilogram of pork at designated booths at a price 10 percent lower than the average price of the previous 10 days.

Qin Shiliang, an official of the Nanning city development and reform commission, explained: "Before, a pork steak sold for 65.8 yuan per kg, nearly twice as much as last year, and lower income families were hurt. So we decided to provide a certain amount of pork every day at a lower price to cool the rising prices."

With a price of 57.4 yuan per kg, Liang Fang, a pork vendor at the Macun market－one of the 10 designated markets－quickly sold all of her pork steaks.

"I had more customers on Sunday," she said. "People are glad to buy cheaper pork, and a few stock up."

According to Qin, only 500 pigs a day may be sold in the 10 markets where the price is capped. The price gap is subsidized by the government.

"It is the market that determines the price－we won't forget this," he said. "We simply want people who are in need to be relieved."

With the traditional Mid-Autumn Festival and National Day holidays approaching, the Hainan Provincial Food and Materials Reserve Bureau is injecting frozen pork from reserve supplies into the market as an emergency measure to rein in prices and meet the anticipated holiday demand. The holidays are peak season for tourism in the tropical island province.

"Every day, we supply the stores with a total of 1,520 kg of pork in nine varieties, including streaky pork, spareribs, pork shoulder and pigs' feet, with retail prices ranging from 35.98 yuan to 61.6 yuan per kg. Sales of reserve pork products will continue to the end of February."

Zheng said the company will increase the amount of reserve pork as needed from the provincial reserve bureau to ensure sufficient supplies.

A woman at a meat market in Hainan's Longhua district, who identified herself only as Wang, said: "Seeing the certificates and seals of animal product quarantines and meat quality inspections, and the reports on African swine fever that are presented at the store, I feel greatly at ease. The prices of reserve pork products here are lower than the supermarkets, which makes me very happy."

The frozen meat reserves will also be delivered to other cities and counties on the island, including Sanya, Danzhou, Wanning and Qionghai, to ensure availability to residents, school canteens and nursing homes, Hainan Daily reported last week.

Sichuan province issued nine rules recently to promote the production of live pigs and stabilize the market. They include improving and standardizing the breeding of live pigs, imposing strict inspection and quarantine measures and ramping up supervision of pig farms and the pork processing industry.