We are part of this incredible story

By Chai Hua in Hong Kong

Deloitte Global CEO Punit Renjen applauds China’s rapid growth over the past 40 years as something that has never been seen before in human history. He tells Chai Hua Deloitte is proud to have played a part in this remarkable tale. 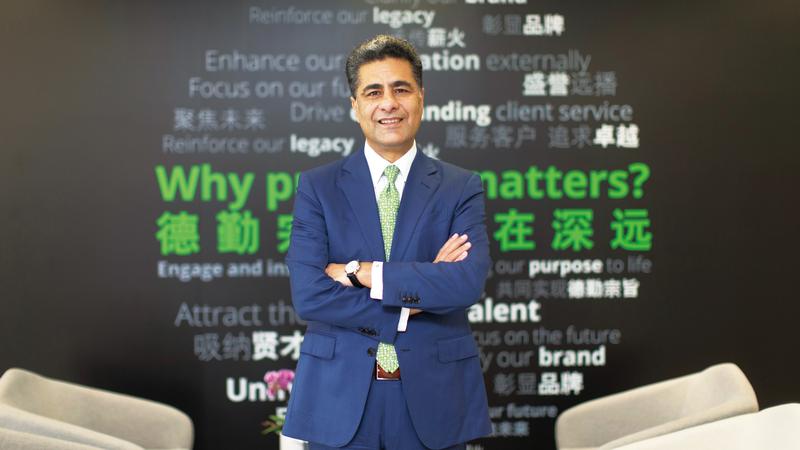 Deloitte Global CEO Punit Renjen believes that emotions do have a place in business and encourages people to show their humanness. (ROY LIU / CHINA DAILY)

Gazing out of the window in Deloitte’s office in Shenzhen at a myriad of skyscrapers dotting the city’s ever changing skyline, the group’s global chief executive officer Punit Renjen is fascinated by the metropolis’ incredible transformation from a sleepy fishing village to “China’s Silicon Valley”.

“What China has accomplished over the last 40 years is indeed remarkable,” says Renjen, and he’s proud that Deloitte has contributed to and reaped the benefits from this development.

Setting foot in China many times a year qualifies Renjen to be a witness to the country’s historic reform and opening-up since 1978 and, each time, he uncovers something new, especially on his first visit to Shenzhen.

If you’re genuinely passionate about and invested in the ideas you present, people can feel that and that feeling is contagious

He found a growing shift in the mindsets of Chinese companies, plus the thrilling opportunities in the technology field. At the same time, he believes the one thing that will not change is the market’s exponential growth.

“China will continue to be one of our strongest markets in terms of business growth across our global network over the next five years with a focus on the technological arena,” Renjen tells China Daily in an interview during his trip in November.

As early as in 1917, Deloitte — one of the world’s “Big Four” professional services organizations — entered the Chinese market with its first location in Shanghai.

Its office in Hong Kong was established in 1972, beginning an era in which it provided professional services, including audit and tax advisory to Hong Kong and multinational companies seeking to enter the Chinese marketplace.

Deloitte’s growth on the mainland was mirrored by China’s rise in the global economy. It gradually launched diversified services, including IPO reporting and expanded to more cities as the reform and opening-up policy gathered steam.

The largest professional services provider in the world by revenue and the number of professionals employed has grown into a network of more than 16,000 staff across China today, delivering a full range of audit and assurance, consulting, financial advisory, risk advisory and tax services.

In addition, the global CEO forecasts that headcount in the country will expand at double-digit rates, so that in the next five years, Deloitte will be twice the size it is today.

“Taking 1.3 billion people and affecting them in the way China has is something I do not think has been seen before in human history,” he says.

Shenzhen, for example, was one of the first special economic zones to implement the policy of reform and opening-up since its introduction in 1978. Today, the city’s GDP has reached 2.24 billion yuan (US$355 billion).

“One of our strategies is to tilt to Asia and tilt to China because it’s the right thing and right business thing to do,” Renjen argues.

He notes that China’s growth over the past four decades has been fueled by globalization and an export-oriented mindset, but the country is now looking to further reform the market and the economy and, rightly so, to sustain growth. This means a shift to more domestic consumption will be vital, he stresses.

Stimulated by strong consumer demand, Renjen believes today’s opportunity is “tremendous for any global enterprise and any global brand that wants to come into China”.

However, he reminds organizations they should realize that Chinese consumers are very discerning and move at their own pace. “Localization will be critically important for international brands, without losing some of the value they have, so adapting to local customs and local needs is going to be incredibly important.”

Besides helping foreign companies enter the Chinese market, including more than half of those on the Fortune Global 500 list, assisting Chinese companies to take their rightful place as global leaders is also full of potential.

Private and State-owned enterprises are looking to become global leaders and their accelerating shift in mindset is a tremendous opportunity for enterprises like Deloitte, says Renjen.

During his visit to Shenzhen, Chinese companies frequently asked Renjen: “How do we take our products and make them global leaders?”

“One said 21 of our products are world-leading, but they want to take another 14 or 15 and make them world-leading as well,” he recalls. “As a result, M&A is going to be a very important part of the growth story for Chinese companies.”

This does not just mean large transactions like ChemChina’s acquisition of Syngenta. Smaller unicorns will also get involved.

Another new opportunity, Renjen says, is the country’s thriving technological hubs, like Shenzhen, and its many technological advances, such as those of internet gurus Alibaba and Tencent, as well as AI unicorn SenseTime, which originated in China.

At a meeting with clients before his interview with China Daily, Renjen learnt they were very interested in the smart city concept, the future of mobility and work — the same areas on which Deloitte is focusing and in which will be making big investments.

For instance, a specific challenge that has caught his attention derives from how data in China’s medical system is disorganized, potentially creating huge opportunities for companies able to use AI to harness that data in a systematic way for customized functions.

The consortium aims to bring about unprecedented data-driven innovation on a secure, user-friendly platform to effectively leverage open data in Hong Kong and the Guangdong-Hong Kong-Macao Greater Bay Area.

Deloitte is also planning a high-tech center in Shenzhen as part of its “Digital Difference” project in China.

Recently, innovation and technology have become buzzwords in media reports, but can still feel distant from people’s everyday lives.

However, Renjen is optimistic that business demand has emerged that may not have existed just a few years ago. “There’s now an ability to actually get solutions out there and make them profitable.”

Born in a small town in India, Punit Renjen has made it all the way to the top of a multinational enterprise that runs a network of 286,000 professionals across 150 countries.

He’s the first Asian chief executive officer of Deloitte — the world’s largest professional services provider in terms of the number of professionals and revenue.

Renjen calls the tune in hiring around 70,000 people after scrutinizing some 5 million resumes the company receives each year. The acceptance rate is about 2 to 3 percent — even lower than that of Harvard University.

But, his leadership style in managing such an enormous and complicated organization is not about ruling with an iron fist. Instead, he believes that emotions do have a place in business, contrary to what some people may think.

“If you’re genuinely passionate about and invested in the ideas you present, people can feel that and that feeling is contagious,” suggests Renjen. “So, don’t hold back!”

Another tip is to show one’s humanness. He explains that this means to “talk about what drives you, your experiences, and what you stand for”.

“If people can understand and relate to where you’re coming from, they’re more likely to be thoughtful about the decisions you make,” he stresses.

Renjen was raised in a small town in India. His father encountered financial difficulties when he was young, so Renjen was forced to work part time in a factory. He moved to the United States in 1984 after receiving a full scholarship to Willamette University.

In his 32nd year with Deloitte, he took over as chief executive in 2015.

When Renjen was a young boy, he had no idea what his life would be like, but one principle his parents and teachers had instilled in him back then was to guide him all along.

“Work must have a sense of purpose beyond mere financial gain, and the purpose should be meaningful by making a positive and lasting difference in the lives of others,” he says.

Growing up with very limited resources, he feels very lucky to have what he has, so it’s important for him to give back. He also inspires people at Deloitte, as well as young millennials who would like to join the organization, to positively impact their communities.

The World Class Initiative was created on the basis of values like this.

Renjen says, over the next 12 years, Deloitte is committed to impacting the futures of 50 million people — 10 million of them in China — by helping them access the education and training they need to meet job demands in the digital era.

“On the Chinese mainland, we focus on getting access to education for children left behind by their parents who go out to work in other cities while, in Indonesia, we impact 40,000 farmers who now keep most of the profit from the crops they grow, instead of losing it to middlemen,” says Renjen.