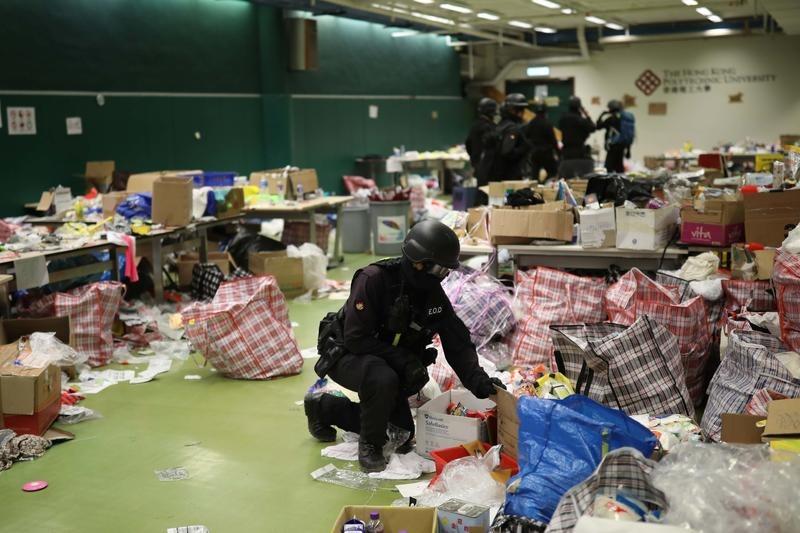 A police officer of the Explosive Ordnance Disposal search for hazardous items on the campus of the Hong Kong Polytechnic University (PolyU) on Nov 28, 2019. (PHOTO / CHINA DAILY)

In response to the article authored by Dr. Darren Mann, who attended the injured at the PolyU, a HKSAR government spokesman said that the well-being and safety of the injured has been a top priority of the HKSAR government from the time the standoff started, and the approach of the police and other emergency services is to resolve the standoff peacefully and flexibly.

Stressing that "context is needed in this case," the spokesman pointed out that by the time Mann arrived at the PolyU on Nov. 17, violent protests and riots had been taking place and escalating for five days at the campus, in surrounding areas and elsewhere in Hong Kong, and "the situation was extremely dangerous and volatile and a serious threat to public safety and human life."

The spokesman explained that throughout the incident rioters and others inside the campus, including members of the media and first-aid providers, were repeatedly asked and given opportunities to leave peacefully, but many did not take up this offer.

Those under the age of 18 were allowed to leave without being arrested at the scene after providing personal details. The police reserve the right to take follow-up legal action if necessary.

During a mass exodus on the evening of Nov. 17, considering that it has been a common tactic of rioters to disguise themselves as first-aid workers or media representatives to escape detection and arrest, the police did detain people claiming to be first-aid workers and media representatives to confirm their identities and credentials. Those who could prove their bona fides were released, while 12 self-claimed first-aid workers who did not have first-aid qualifications and did not work for any medical institution and seven who claimed to be media workers but could not produce any solid proof were arrested.

The police did suggest that ambulance crews could attend the scene, but this offer was rejected by protesters for fear of being arrested. On the morning of Nov. 18, the police started to make arrangements for Hong Kong Red Cross (HKRC) volunteers to enter the campus.

ALSO READ: Police to lift PolyU siege by Friday at the earliest

Contrary to Mann's claim, the HKRC has confirmed that its volunteers were not delayed in their work, nor given a time limit.

The police also arranged for other groups including the Fire Services Department (ambulances) and Médecins Sans Frontières volunteers to provide medical or first aid services at or in the vicinity of the campus.

Contrary to Mann's claim, the HKRC has confirmed that its volunteers were not delayed in their work, nor given a time limit

In parallel, the Hong Kong Hospital Authority (HA) closely monitored the situation to ensure that Accident and Emergency Departments (AEDs) in public hospitals were ready to promptly provide medical services if and when needed. Around 80 injured persons from the campus were received by various AEDs on the morning of Nov. 19, according to the spokesman.

At around noon that day, around 100 injured persons were still at the scene. The HA sent an Emergency Medical Team to the site to assess the situation and eventually arranged for the transfer of about 200 injured persons to 12 public hospitals for treatment. Most were in a stable condition.

"Throughout the entire incident, the government leadership and emergency services departments, in cooperation with a wide range of others including university staff, secondary school principals, community and religious leaders as well as social workers, have appealed to the protesters and the injured to leave the campus peacefully and to seek medical care as necessary," he said.