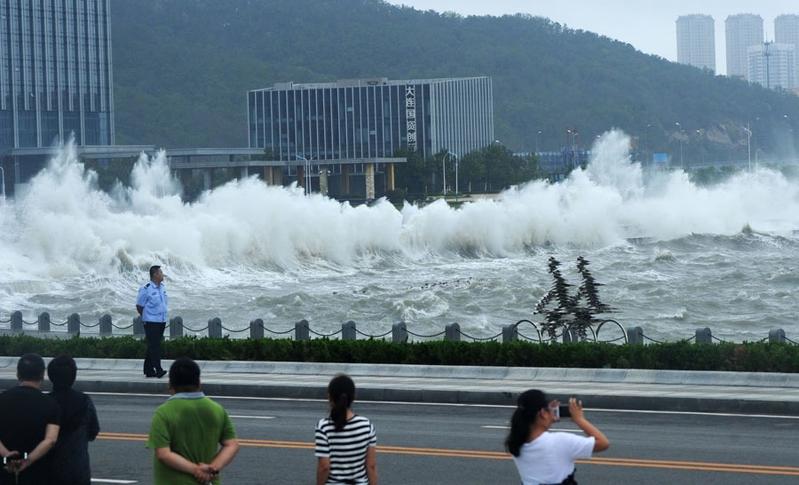 A weakening Typhoon Lekima continued to hit the northeastern regions, forcing over 130,000 people to evacuate and damaging 6,020 hectares of farmland as of noon on Tuesday in Liaoning, but no casualties have been reported, said the provincial flood control authority.

Forecasts from the National Meteorological Center show that Lekima has been moving northward from Shandong to Liaoning provinces since Tuesday morning, bringing torrential rains and gusts.

The local meteorological department predicts that heavy rains will continue to drench Liaoning until Thursday, and the risks of flooding remain high in both Liaoning and Jilin, flood control authorities from the two provinces said.

The Liaoning provincial government warns that the current priority is to pay close attention to the situation in the Liaohe River Basin, especially the debris flow and evacuation of dangerous areas.

"Although the intensity of the typhoon has been downgraded from tropical storm to tropical depression, the typhoon prevention and flood control in Liaoning has reached the most critical turning point," said Yang Qingguo, deputy director of the office of Liaoning Flood Control and Drought Relief Headquarters.

Because the main river basins and soil in Liaoning have been basically saturated with water while the rainfall continues, a high risk of flooding remains, Yang said. In addition, heavy rainfall in Jilin province will exert extra pressure on the upper reaches of Liaohe River, which runs through the two provinces.

This has been confirmed by information from the Jilin provincial government.

Rainfall began to increase in Jilin province on Tuesday afternoon. Jilin has raised its emergency response to flood control to Level III. The local government warned that Lekima may cause flooding.

"Liaoning is carrying out reservoir flood control work according to real-time rainfall to ensure flood control safety. At the same time, 63 reservoirs with excess floodwaters have been discharged," said Yu Songyang, deputy director of the dispatching center at Liaoning Water Resources Management Group.

Information from local authorities shows most of the 1,561 meteorological stations in Liaoning province have monitored rainfall in the past two days. Huludao city saw the largest rainfall of 129 millimeters on Monday.

Lekima, the strongest typhoon to date in China this year, has wreaked havoc in eastern coastal regions including Zhejiang, Jiangsu and Shandong provinces as well as Shanghai, inundating the areas with torrential rains, gusts and floods after making landfall on Saturday in Wenling, Zhejiang. It has left 49 dead and 21 missing in Zhejiang, Shandong and Anhui provinces as of Monday night.

There were growing concerns about the price of vegetables rising after flooding hit Shandong's Shouguang city, China's major vegetable production base and distribution center.

The large-scale rainstorms brought by Lekima recently raised harvesting, shipping and storage costs of vegetables, especially top-quality ones, thus driving up the prices.

The rising price also contributed to lower production of local vegetables, which had been mostly harvested to get greenhouses ready for the next cultivation season, and an increase in demand as the rain cooled the summer weather.

Liu Xueming, village Party secretary of Suqin village in Shouguang, said the price would gradually drop as Shouguang vegetables are sold mainly from October to May.

"After this typhoon, farmers can plant vegetables again if there is no more extreme weather. Eggplants and chili peppers may go for sale a little bit late," he said.