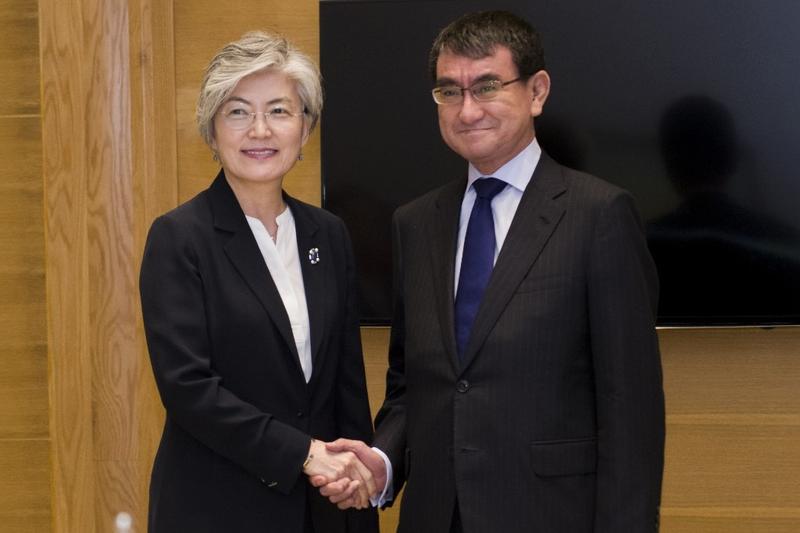 SEOUL — Top diplomats of the Republic of Korea (ROK) and Japan will meet in Paris on the sidelines of a ministerial meeting of the Organization for Economic Cooperation and Development (OECD) amid the row over Japan's wartime forced labor during its 1910-45 colonization of the Korean Peninsula, Seoul's foreign ministry said Tuesday.

ROK Foreign Minister Kang Kyung-wha will attend the OECD ministerial meeting in Paris for two days through Thursday, according to the Seoul ministry.

During the visit, Kang will have a one-on-one meeting with Japanese Foreign Minister Taro Kono Thursday as well as the foreign ministers of Peru and France.

The Kang-Kono meeting would come after Japan said Monday that it was seeking the creation of a panel, comprising members from a third country, to address the issue of compensation for the ROK victims who were forced by the Imperial Japan into hard labor without pay during World War II.

Additional ROK victims sued other Japanese firms, including Nachi-Fujikoshi Corp and Mitsubishi Materials Corp, claiming that they or their family members were adversely affected by the wartime forced labor.

Japan was seeking the arbitration based on the 1965 accord, signed by Seoul and Tokyo to normalize the diplomatic relations. The pact included a stipulation on a dispute settlement procedure.

Japan claimed that the reparation issue was settled through the 1965 agreement, but ROK said the accord did not refer to individuals' rights to compensation.