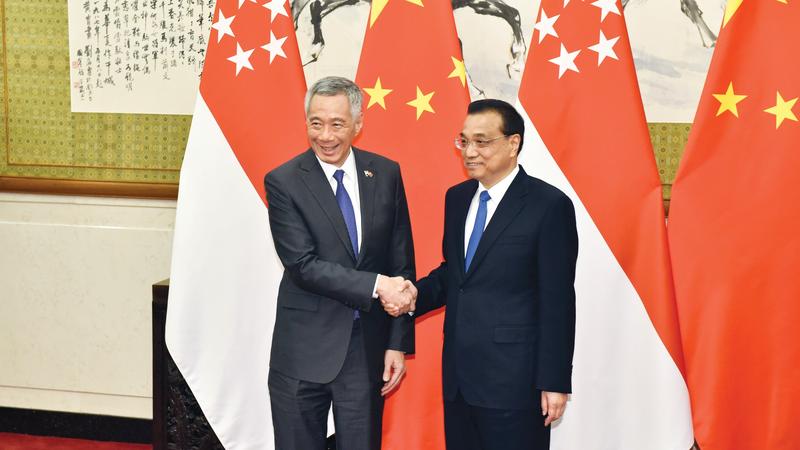 China and ASEAN are expecting closer ties, especially in trade, as both sides celebrate the 15th anniversary of their strategic partnership and Chinese Premier Li Keqiang visits Singapore.

Li is currently in Singapore to attend the 33rd Association of Southeast Asian Nations (ASEAN) Summit and related meetings as part of a five-day official visit from Nov 12 to 16.

Li will also deliver the 44th Singapore Lecture organized by the ISEAS-Yusof Ishak Institute and Business China, the Singapore-based forum.

The visit comes after Singapore’s Ministry of Trade and Industry announced that the two countries have concluded negotiations on an upgraded free trade agreement (FTA), which is expected to be signed during Li’s visit.

With the latest agreement, Singapore companies will enjoy more trade facilitation and investment protection in China as well as fewer barriers to investing in the country and better access to its services sector.

“The two countries have upgraded the free trade agreement. It covers, of course, trade (there are practically no tariff barriers between the two countries) but also protection for Singaporean companies investing in China,” said Cedomir Nestorovic, a professor of international marketing and geopolitics at ESSEC Business School.

“China is already the biggest trade partner for Singapore while Singapore is the largest foreign investor in China,” he said.

Nestorovic considers it a remarkable achievement given the size of Singapore. He also believes Singaporean investment will become increasingly important if Western companies hesitate to invest in China, partly because of pressure from the United States and as part of the ongoing trade war between China and the US.

Nestorovic said ties between China and Singapore “improved year after year, especially in the business and trade area” after relations were officially established in 1990.

Dan Wang, an analyst at the Economist Intelligence Unit (EIU), believes the two countries to be now mutually supportive.

“Singapore has been a long-term supporter of China’s opening-up and reform, and also a most important node in China’s Belt and Road Initiative. China has considered Singapore a mentor in its development strategy, in establishing economic zones, state support for key industries, state asset management and even management of officials,” said Wang.

“The relationship is currently under more pressure against the backdrop of the US-China trade war and geopolitical shifts, but the investment relation remains strong.”

Others point to increased exchanges as a sign of a deepening friendship.

“The two countries may hold different views on some issues but this is normal as countries make policies and take actions based on their respective national interests. The two governments well recognize that and the overall bilateral relationship is mature enough to allow differences,” added Gong.

Discussing common ground, Gong said both countries support free trade and will likely work together to promote it.

Gong also pointed out that good Singapore-China relations are conducive to greater Chinese engagement with the Association of Southeast Asian Nations (ASEAN).

Stronger ties may also help with participation in China’s Belt and Road Initiative.

Nestorovic said Singapore has always been a firm supporter of the Belt and Road Initiative. “This upgraded deal, especially in the domain of protection of Singaporean investments, can only boost Singaporean participation in BRI,” he said.

Support from Singapore for the ambitious infrastructure initiative could also convince those still skeptical of it to join.

“Singapore is the top destination of Chinese investment among all Belt and Road countries, and a major supporter of the initiative,” said Wang.

Gong of NTU said: “The Belt and Road Initiative creates opportunities for both countries to strengthen cooperation in areas like financing, logistics and transportation, and explore the possibility in joint projects in other countries.”

Stronger Sino-Singapore ties may also be the way forward to boost the development of issues beyond trade.

“Holding the (current) ASEAN chairmanship, Singapore has been pushing for innovation and the development of smart cities in member states. There is space for cooperation in this area,” said Gong.

“For Singapore, China is an endless land of opportunity, especially for the innovative solutions Singapore can propose in smart cities or healthcare management or services,” said Nestorovic.

Besides trade, Wang pointed to asset management, education, and city management as areas that the two countries can improve in the future.

“Stronger bilateral relations are good for both countries. It helps to facilitate communications to form better mutual understanding and coordinate on economic, cultural, and political issues of mutual concern,” said Gong.

“Singapore will act as a stabilizer among all the countries involved.”