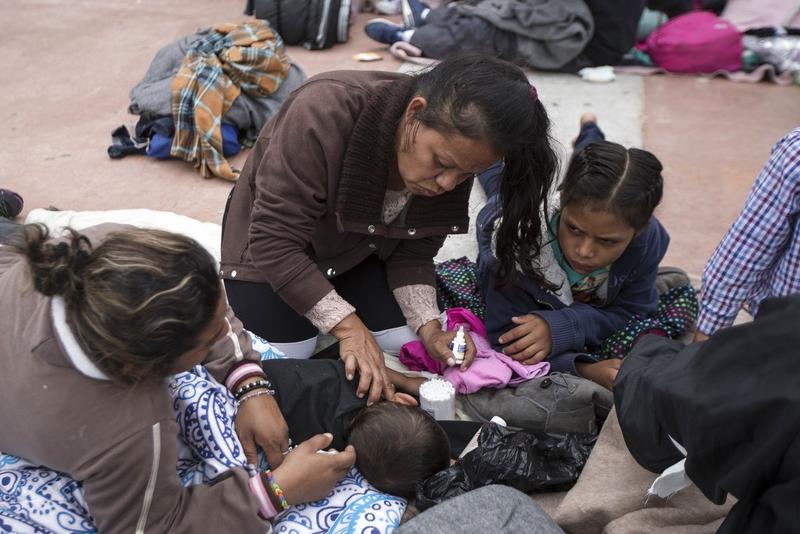 A two-year-old child from Honduras gets treatment for an ear infection after sleeping in the open in front of the El Chaparral port of entry, in Tijuana, Mexico, April 30, 2018.  (HANS-MAXIMO MUSIELIK / AP)

SAN YSIDRO PORT OF ENTRY - Eight women and children from a caravan of hundreds of Central American migrants have sought asylum in the United States after officials allowed them entry from Mexico, fueling hope among their companions who remain camped outside the border crossing.

Gathering people along the way, the caravan set off a month ago on a 2,000 mile trek across Mexico to the US border, drawing attention from the US media after President Donald Trump took to Twitter to demand such groups not be granted entry and urging for stronger immigration laws.
READ MORE: Migrant caravan raising concerns in US takes break in Mexico

His administration's hands are tied, however, by international rules obliging the United States to accept asylum applications. Most in the caravan said they were fleeing death threats, extortion and violence from powerful street gangs.

Dozens of members of the caravan slept in the open for a second cold desert night in the surroundings of the busy San Ysidro port of entry, after pumping fists and cheering the news late on Monday that Customs and Border Patrol (CBP) had opened the gate to eight women and children.

Those left behind said they would continue their sit-in until they were at least allowed to recount their stories to border officials and try to convince them that it was unsafe to go home. The caravan swelled to 1,500 people at one point but has since dwindled to a few hundred.

"We crossed the whole of Mexico," said Angel Caceres, who said he fled Honduras with his five-year-old son after his brother and nephew were murdered and his mother beaten and raped. They would stay, he said, "until the last person is in, as long as it takes."

It was not clear when more of the group would be allowed to make their asylum bids. A CBP spokeswoman said the port of entry was congested with other undocumented immigrants, and that the caravan members might have to wait in Mexico temporarily.

The majority of asylum claims by Central Americans are ultimately unsuccessful, resulting in detention and deportation. The Trump administration says many claims are fake, aided by legal loopholes. 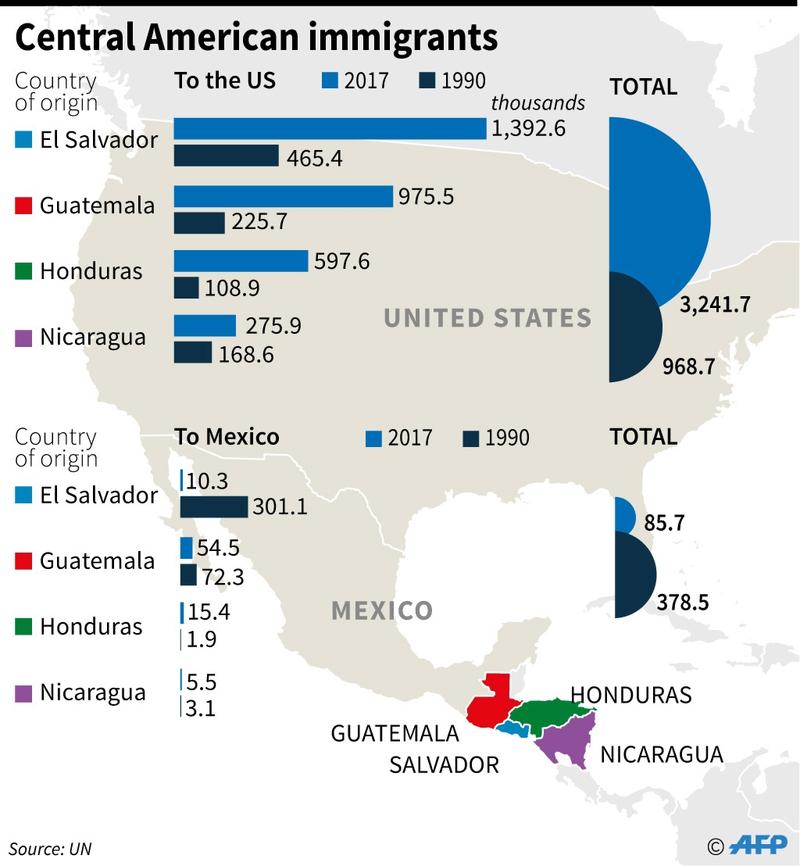 Vice-President Mike Pence has accused the caravan's organizers of convincing people to leave their homes to advance an "open borders" agenda.

Only two of the dozens of people in the caravan who spoke to Reuters over the past month said they were aware of the caravan's existence before they left home. They said it had not played a role in their decision to flee what they described as appalling conditions.

Asylum seekers must demonstrate a well-founded fear of persecution at home, most often from a state entity. Central Americans fare badly in such claims because the state is rarely seen as directly responsible for the life threatening situations they leave behind.

US border authorities said in a statement at the weekend that some people associated with the caravan were caught trying to slip through the border fence.

Trump on Monday railed against a system that may see some of the caravan members freed in the United States until their cases are resolved, because a shortage of beds at detention centers and rules that limit how long women with children can be held.

"Catch and release is ridiculous. If they touch our property, if they touch our country, essentially you catch them and you release them into our country. That's not acceptable to anybody, so we need a change in the law," he said.
ALSO READ: Trump pushes firm immigration policies even as he urges unity