France 'open to' reimposing sanctions if Iran reneges on deal 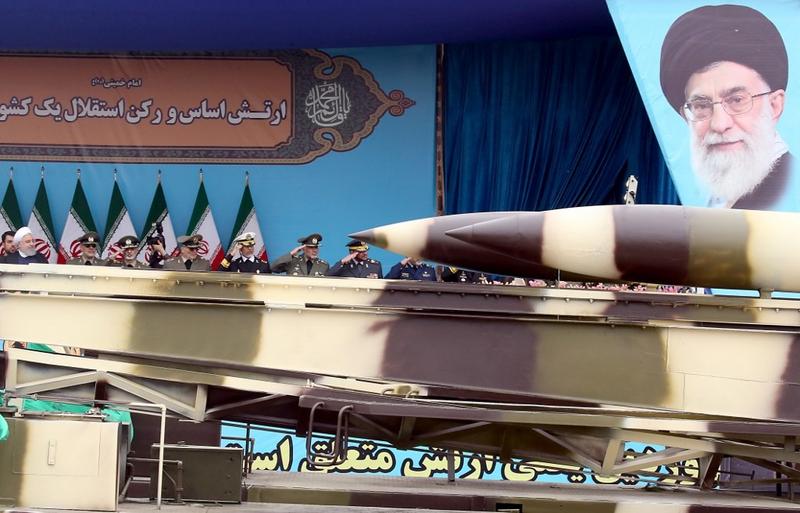 PARIS / BAGHDAD — International sanctions could be reimposed on Iran if it reneges on commitments under its nuclear deal, sources at the French presidency said on Tuesday, after Tehran said it would scale back its compliance year after Washington pulled out.

The US military said on Tuesday that B-52 bombers would be part of additional forces being sent to the Middle East to counter what the Trump administration says are "clear indications" of threats from Iran to US forces there.

Iran dismissed announcement of a US aircraft carrier deployment as old news, recycled for psychological warfare, and said it would soon announce plans to roll back some of its commitments under the 2015 deal

Iran dismissed announcement of a US aircraft carrier deployment as old news, recycled for psychological warfare, and said it would soon announce plans to roll back some of its commitments under the 2015 deal.

US Secretary of State Mike Pompeo made an unannounced visit to Iran's neighbour Iraq on Tuesday and met with the Iraqi prime minister after telling reporters Washington was concerned about Iraqi sovereignty because of increasing Iranian activity.

He said afterwards he had talked to the Iraqis about the importance of Iraq ensuring it was able to protect Americans in the country and said he hoped the US deployments would make “the Iranians think twice about attacking American interests."

He said the Pentagon had warned of very specific threats "that were going to happen fairly soon."

"We’ve learned about them and we’re taking every action to deter them," he said.

Asked about Iran's warning that it would soon announce plans to roll back some of its 2015 commitments, Pompeo said: "We’ll obviously have to wait and see what they choose to do. ... I think everyone will look at the Iranians' decision and to make their own assessment of how much increased risk there is."

Tensions have risen on the eve of the anniversary of President Donald Trump's withdrawal from the agreement, under which Iran agreed to curbs on its nuclear programme in return for the lifting of international sanctions.

The Trump administration has restored US sanctions and extended them, effectively ordering countries around the world to stop buying Iranian oil or face sanctions of their own.

Iran has continued complying with the deal. Washington's European allies, which oppose the US pullout, have tried and failed to come up with ways to blunt the economic impact of the US move while urging Iran to continue to comply.

Iranian media reported that Tehran would write to the countries still signed up to the deal - US allies Britain, France and Germany as well as Russia and China - on Wednesday to give them details about plans to "diminish its commitments" under the deal.

Iranian state news reports have said Iran does not plan to pull out, but will revive some nuclear activity that was halted under the deal.

A French presidential source said the European countries did not yet know precisely what steps Iran was now planning, but they could have to reimpose sanctions on Iran if those steps amount to reneging.

"We do not want Tehran to announce tomorrow actions that would violate the nuclear agreement, because in this case we Europeans would be obliged to reimpose sanctions as per the terms of the agreement," the source said.

We sent messages to Tehran to say that we were determined to implement the agreement, that we really wanted them to stay in this agreement even though we took into account the complexity of the situation and passed on the same messages to our American allies

"We sent messages to Tehran to say that we were determined to implement the agreement, that we really wanted them to stay in this agreement even though we took into account the complexity of the situation and passed on the same messages to our American allies," the source said.

A second French official later said that if Tehran failed to comply with the deal, the issue would be treated through a dispute mechanism under the accord itself, which could lead to the reimposition of UN Security Council sanctions.

US officials have spoken in recent days of intelligence suggesting a military threat from Iran, although they have not given specific details.

Acting US Defense Secretary Patrick Shanahan said on Monday he had approved dispatching the Abraham Lincoln carrier strike force and bombers due to indications of a "credible threat by Iranian regime forces".

While he gave no details, US officials have told Reuters there were "multiple, credible threats" against US forces on land, including in Iraq, by Iran and proxy forces, and at sea.

US officials, speaking on condition of anonymity, said four B-52s would be deployed to the region, though that number could change. The United States has regularly maintained a bomber presence in the region, and B-1 bombers were there as recently as last month.

Keyvan Khosravi, spokesman for Iran's Supreme National Security Council, said the Abraham Lincoln was already due in the Gulf and dismissed the announcement as a "clumsy" attempt to recycle old news for "psychological warfare."

On Tuesday, the Pentagon confirmed that the Abraham Lincoln carrier strike group had already been scheduled to go to the Middle East, but that its movement was "expedited" due to the tensions with Iran.

The United States typically rotates an aircraft carrier in the Gulf to serve as the flagship of its Fifth Fleet based in Bahrain. The previous carrier in the area, the John C Stennis, left in April to sail for home at the end of its deployment.

Iranian Foreign Minister Mohammad Javad Zarif said on Twitter: "If US and clients don't feel safe, it's because they're despised by the people of the region - blaming Iran won’t reverse that."

Iran's state-run Press TV earlier said: "The deployment seems to be a 'regularly scheduled' one by the US Navy, and Bolton has just tried to talk it up."

Unnerved by the war of words, Iran’s rial currency extended its fall on Tuesday, hovering around a seven-month low of 150,500 against the dollar on the unofficial market, foreign exchange websites reported.

Since withdrawing from the nuclear deal, Washington has given waivers to some countries, mainly in Asia, to keep buying Iranian oil for a limited time. But last week it said it would now end the waivers to reduce Iran's crude exports to zero.

The administration also blacklisted Iran's elite Revolutionary Guard Corps as terrorists. The Guards control a large swathe of Iranian industry, so their blacklisting could make it harder for foreign companies to do business with Iran.

Iran has responded by declaring all US forces in the Middle East to be terrorists. It has also made threats to close the strategic Strait of Hormuz in the Gulf if Tehran were barred from using it. Around 30 percent of the world's seaborne oil exports pass through the strait.