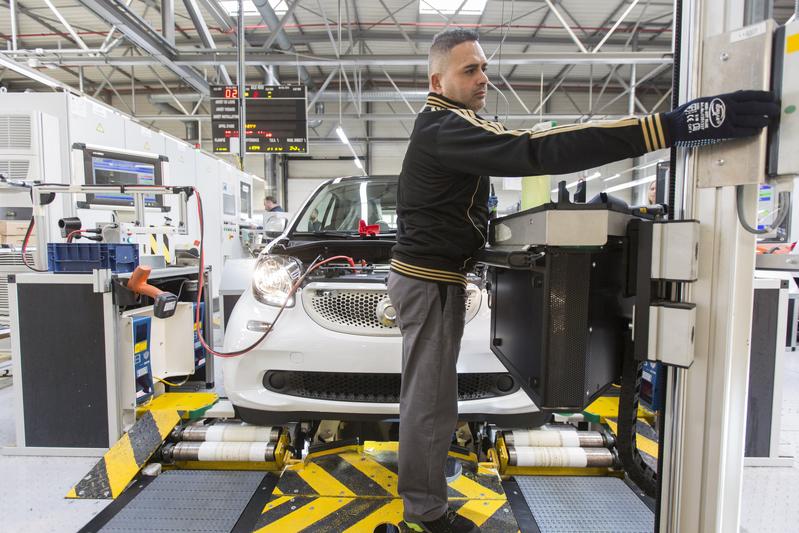 In this undated photo, an employee checks the headlights of a smart fortwo automobile on the assembly line at Daimler AG's Smartville factory in Hambach, France. (PHOTO / BLOOMBERG)

Zhejiang Geely Holding Group and German carmaker Daimler AG are to set up a 50-50 joint venture in China, which will make the country the sole producer and exporter of electric smart-branded vehicles from 2022, the two carmakers said on Thursday.

The joint venture, which is expected to be finalized later this year, will "own, operate and further develop" the brand established in 1998 as a leader in premium electrified vehicles, said the two in a joint statement, without giving details about investment.

The two sides have agreed that Daimler will be responsible for the styling of the vehicles while Geely, which became Daimler's largest shareholder last year, will do the engineering work of the new generation of electric vehicles.

Daimler, which is also the owner of Mercedes-Benz, announced two years ago that the iconic smart brand will be battery-powered by 2020.

Geely and Daimler also plan to expand the current lineup to include compact models, which are growing fast in China.

Daimler is currently producing the smart-branded vehicles in a plant in Hambach, France, which will be retooled to manufacture electric Mercedes-Benz models when the Chinese facility is finished in the early 2020s, although its location has yet to be released.

On his LinkedIn account, Dieter Zetsche, Daimler's chairman, said: "It's the beginning of a new chapter in the history of smart brand－a chapter that includes new models, entry into new segments, and the start of a new period of growth."

The smart brand has a unique appeal and strong commercial value

It is likely that China will prove crucial to the brand as the country has been the world's largest market for new energy vehicles and is home to over 100 cities that have more than 1 million people, an ideal market for small-sized vehicles.

Geely President An Conghui said electrification is an irreversible trend and the segment of small-sized vehicles, especially those from premium brands, will grow fast.

"The smart brand has a unique appeal and strong commercial value. We look forward to this challenging and exciting new project, through which we will further push the introduction of premium electric products to give a better mobility experience to our customers," said An.

Ola Kaellenius, a board member at Daimler, said the company weighed options but it is a natural choice to have a Chinese partner as China and Europe are the largest markets for its smart-branded vehicles.

He called Geely a "perfect partner" because of its strong technological capabilities and operational experience in Europe as Daimler is looking for a global solution for its smart division.

"This is the best business case for smart brand and its future," said Kaellenius.

John Zeng, managing director of LMC Automotive Shanghai, said the partnership will at least help Daimler increase the prospects of the brand's profitability, because Geely has shown outstanding cost-control abilities as demonstrated by its Lynk& Co models.

Geely and Daimler did not give an estimate of the time needed for the partnership to make a profit, but both expressed confidence.

"We are in the business to make money, and it's our goal to make the joint venture with Geely sound," said Kaellenius.

Besides Geely, Daimler is working with BAIC Motor Group to locally produce its Mercedes-Benz models, with the electric EQC due to roll off its assembly line in Beijing later this year.

China has been the largest market for Daimler. Last year, its China sales totaled more than 650,000 vehicles, around a quarter of its global sales.