Chinese President Xi Jinping delivers a keynote speech at the opening ceremony of the Conference on Dialogue of Asian Civilizations in Beijing, capital of China, May 15, 2019. (XINHUA)

BEIJING — Chinese President Xi Jinping on Wednesday urged various countries to treat each other as equals for the peaceful coexistence of civilizations.

"Various civilizations are not destined to clash," Xi said at the opening of the Conference on Dialogue of Asian Civilizations, Asia's first-ever grand gathering themed on inter-civilizational exchanges and mutual learning for a community with a shared future.

Thousands of people from 47 Asian countries and nearly 50 countries outside the region attended the conference in Beijing.

"The intensifying global challenges humanity are facing now require concerted efforts from countries across the world," Xi said, highlighting the role of culture to cope with common challenges. 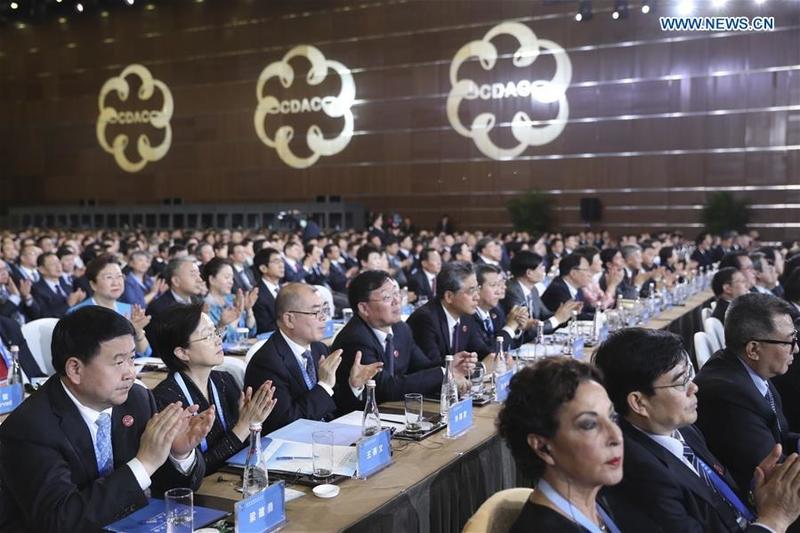 Attendees clap their hands during the opening ceremony of the Conference on Dialogue of Asian Civilizations (CDAC) at the China National Convention Center in Beijing, capital of China, May 15, 2019. (JU PENG / XINHUA)

Xi noted there would be no clash of civilizations as long as people were able to appreciate the beauty of all civilizations.

"It is foolish to believe that one's race and civilization are superior to others," Xi said. "It is disastrous to willfully reshape or even replace other civilizations."

The Chinese president raised a four-point proposal to consolidate the "cultural foundation" of jointly building a community with a shared future for Asia and humanity: treating each other with respect and as equals; appreciating the beauty of all civilizations; adhering to openness, inclusiveness, mutual learning; and keeping pace with the times.

Equality, reciprocality, diversity and multi-directionality are underscored in exchanges among civilizations.

The exchanges, Xi said, should neither be compulsory or forced, nor one-directional.

Asia, with two-thirds of the global population, is a major birthplace of human civilization and home to vibrant cultures. There are 47 countries and more than 1,000 ethnic groups on the continent. 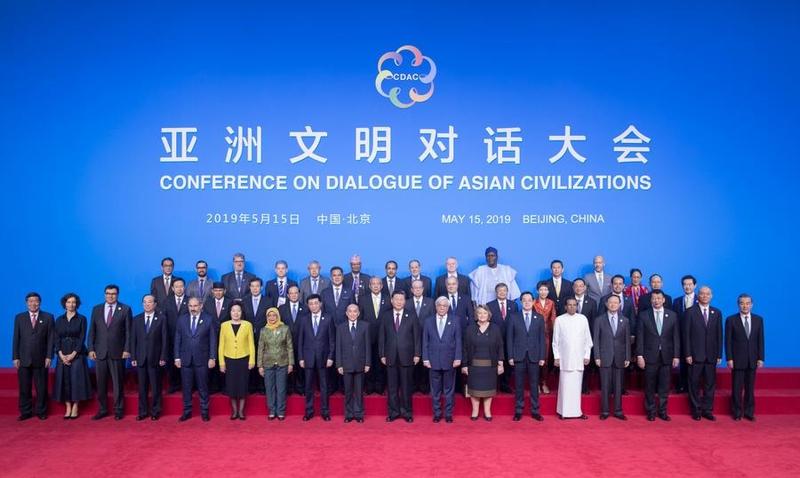 Chinese President Xi Jinping and leaders of other countries take a group photo ahead of the opening ceremony of the Conference on Dialogue of Asian Civilizations in Beijing, capital of China, May 15, 2019. (XINHUA)

The conference comes at a time when certain countries have resorted to the "clash of civilizations" argument, bullying, unilateralism and an inward-looking mentality.

Qian Chengdan, a professor at Peking University, said the Xi-proposed event is highly relevant in the current political environment.

"It will boost understanding among different civilizations and pave the way for a brighter future for humanity," Qian said.

The Chinese president's take on civilization has won broad support from conference attendees.

"When he talked about discarding arrogance and prejudice to treat each other as equals, there was a round of applause," said Zhai Kun, another professor at Peking University. "That was really a show of approval."

In their talks on Tuesday, Greek President Prokopis Pavlopoulos told Xi that he believed the "clash of civilizations" argument was a huge mistake.

He agreed that different civilizations should respect each other, enhance mutual learning through dialogue and exchanges and draw upon each other's strengths.

"Civilizations are not meant to make war," said Massoud Daher, a professor at Lebanese University who attended the conference. "There is no clash of civilizations but complementarity between them."

Professor Qian said the Chinese proposal will address challenges such as global deficits in governance, trust, peace and development.

The week-long event includes an opening ceremony, panel discussions, an Asian Culture Carnival and Asian Civilization Week involving more than 110 activities to showcase the diversity and charm of Asian civilizations.