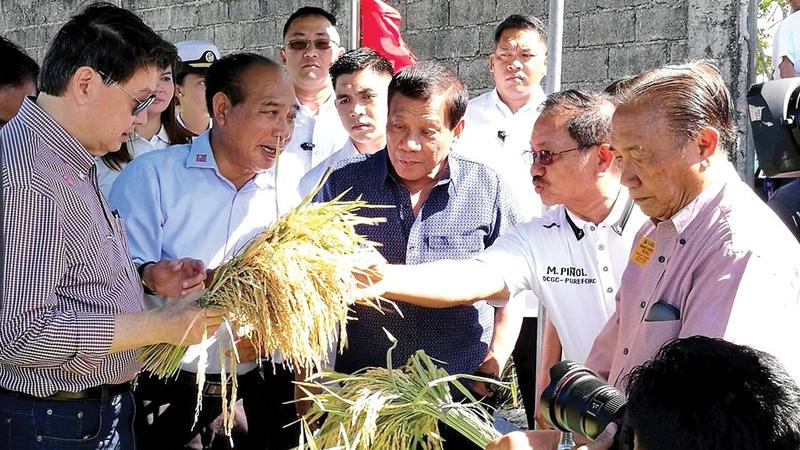 Entrepreneur Iloisa Romaraog-Diga has been busy sending deliveries of rice to many households in Manila, the Philippine capital, in recent weeks.

Through her e-commerce site Session Groceries, she has been selling rice sourced directly from a farmers’ cooperative. She said she is helping farmers who are reeling from falling prices of unmilled rice after the Philippines opened up its rice sector early last year.

“We marketed the ‘advocacy’ aspect at first, appealing to our customers that if they buy this rice they will at least help one Filipino farmer,” Diga said.

Since September, Diga has sold 50,000 kilograms of rice. Orders keep arriving, but she knows this will not solve the huge problem facing local farmers: how to survive the cheaper imports that are arriving following the introduction of the Rice Tariffication Law last February.

The new law lifted import restrictions on rice. It imposed a 35 percent tariff on imports of the crop from member countries of the Association of Southeast Asian Nations, and 40 percent for rice sourced outside of ASEAN.

Signed in line with the country’s commitments to the World Trade Organization, the new law is also aimed at halting rising inflation, as rice is the country’s staple and accounts for about 40 percent of each Filipino household’s monthly budget.

The Philippines, a member of the WTO since 1995, had exempted the rice sector from liberalization in order to protect the country’s 2 million rice farmers. Rice is considered a politically sensitive crop, and before the new bill was signed into law, the state-owned National Food Authority was the sole body that could import rice, and only if there was a shortage.

The new law also created the Rice Competitiveness Enhancement Fund, or RCEF, which is financed through an annual 10 billion peso (US$195.5 million) allocation from the national budget.

The RCEF will finance farm machinery and equipment, along with credit services for farmers, helping them to compete with their foreign counterparts.

But in September, just seven months after the new law took effect, farmers were already feeling the pain.

According to Centro Saka Inc, a rural development research center in Manila, the trade price for unmilled rice fell as low as 7 pesos per kg, way below the average production cost of 11 to 12 pesos per kg.

The government has ordered the National Food Authority to buy rice from farmers to help them cope with the deluge of cheaper imports. The agency has been buying unmilled rice at 19 pesos per kg.

Hazel Tanchuling, executive director of the think tank Rice Watch Action Network in Manila, said: “The drop in farmers’ incomes was too much.”

She said even the 10 billion pesos allocated for the RCEF may not compensate for the loss of income brought by the influx of cheap imports.

“The Philippine government is very much aware that we are not competitive. This is the reason the RCEF (has allocated a big portion to) farm mechanization, as labor is one of the main costs in rice production,” Tanchuling said.

Under the law, the government has to allocate about half of the RCEF annual fund to the mechanization of rice farming. The remainder will be spent on distributing seeds, providing credit and conducting skills training.

Romeo Royandoyan, executive director of Centro Saka, said it is difficult for Filipino rice farmers to compete with their peers in the region, as they have to spend more. He cited Vietnam, one of the world’s biggest rice exporters, where the average production cost is about 6.50 pesos per kg — roughly half that of the Philippines.

Royandoyan, who has made comparative studies of rice farming in Asia, said growers in China, Vietnam, India, Indonesia and Thailand benefit from subsidized seeds, fertilizer and irrigation, along with lower land use tax and credit interest. Filipino farmers, by contrast, have higher costs, including tax and interest on credit.

He said this is why the Philippine government may want to consider suspending the new law for about four years and using the transition period to make farmers “more bankable”.

Ordonez said that given the higher cost of producing rice in the Philippines, a tariff double the present level is needed to enable farmers to compete with imports.

He said that as of September, rice imports last year had already hit 2.8 million metric tons. That was more than double the average annual imports of 1.3 million tons posted in previous years, according to government statistics.

Ordonez added that additional tariffs can be imposed as a special “safeguard duty”, as the surge in imports has harmed local farmers. Such a measure is allowed under WTO rules, he added.

V. Bruce Tolentino, an independent member of the Monetary Board, said improving productivity, and not higher tariffs, will help rice farmers in the long run without sacrificing consumers’ interests. The Monetary Board is the policymaking body of Bangko Sentral ng Pilipinas, the Philippines’ central bank, and is one of the agencies that sets the country’s inflation targets.

“Increasing the tariffs will only raise living costs for all Filipinos — it is a very crude instrument for helping farmers,” Tolentino said, adding that while Filipino consumers are paying about 30 to 40 pesos per kg for rice, Thai and Vietnamese consumers pay less than the equivalent of 15 pesos.

Tolentino, an ex-deputy director-general of the International Rice Research Institute, said the best way to help rice farmers is to use targeted measures to boost production.