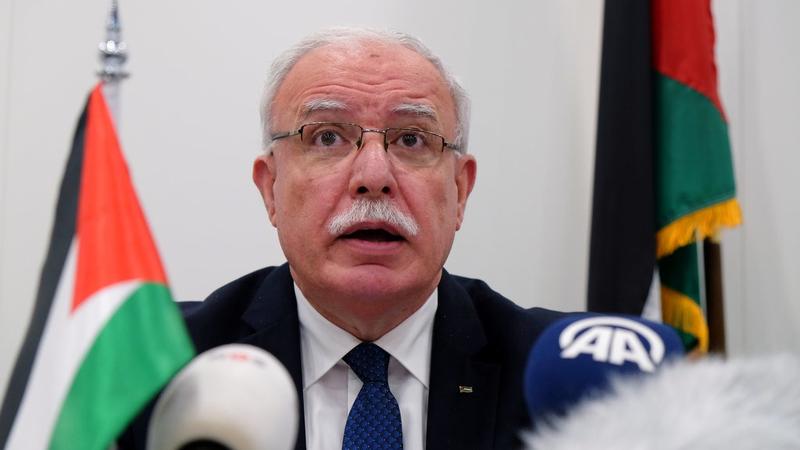 Palestinian Foreign Minister Riad Malki speaks during a press conference at the International Criminal Court on May 22, 2018. (PHOTO / MIKE CORDER)

THE HAGUE, Netherlands — Accusing Israel of systematic crimes, including apartheid in the occupied territories, Palestinians on Tuesday urged the International Criminal Court to open an investigation that could ultimately lead to charges against Israeli leaders.

Justice is the cornerstone of peace. As such we view this step as advancing the prospects of peace

The referral seeks an investigation into Israeli policies in the West Bank, east Jerusalem and Gaza Strip since Palestine accepted the ICC's jurisdiction in 2014, Palestinian Foreign Minister Riad Malki told reporters in The Hague.

This includes Israeli settlement policies in the West Bank and east Jerusalem, as well as bloodshed in the Gaza Strip. Israel and Gaza's ruling Hamas militant group fought a 50-day war in 2014, and in recent weeks, Israeli fire has killed over 100 Palestinians during mass protests along the Gaza border since March.

ALSO READ: Dozens killed in Gaza as US Embassy opens in Jerusalem

By ratcheting up tensions with Israel, the referral to the ICC would seem to further diminish prospects of success for an expected US peace plan. US officials have said President Donald Trump is to unveil the plan in the coming weeks.

The last round of peace talks broke down four years ago without any visible process, and mistrust between Israel and the Palestinians is running high.

The Palestinians have repeatedly accused the US of siding with Israel, especially after the Trump administration recognized Jerusalem as Israel's capital in December, followed by last week's embassy move. The Palestinians, who claim east Jerusalem as their capital, have severed most ties with the Americans and said the White House is unfit to serve as a mediator.

Still, Malki insisted that going to the ICC could become a building block for peace.

"Justice is the cornerstone of peace," he said. "As such we view this step as advancing the prospects of peace."

"We have made clear that we oppose actions against Israel at the ICC as counterproductive to the cause of peace," said Edgar Vasquez, spokesman for the US State Department's Bureau of Near Eastern Affairs.

The State Department declined to say whether the move would trigger a closure of the PLO office in Washington under a provision in US law that requires it to be closed if the Palestinians seek prosecution of Israelis at the ICC.

Israel, which is not a member of the ICC, argues that the court does not have jurisdiction.

"The purported Palestinian referral is legally invalid and the ICC lacks jurisdiction over the Israeli-Palestinian issue, since Israel is not a member of the court and because the Palestinian Authority is not a state," an Israeli Foreign Ministry statement said.

In 2012, Palestine won upgraded status to a nonmember observer state at the UN, which allows membership in many world bodies, including the ICC.

Although Israel is not an ICC member, its citizens can be charged by the court if they are suspected of committing grave crimes on the territory or against a national of a country that is a member. The ICC has recognized "Palestine" as a member.

The ICC is a court of last resort — authorized to take on cases where national authorities cannot or will not launch prosecutions.

Israel said it expects the ICC and its prosecutor "not to yield to Palestinian pressure, and stand firm against continued Palestinian efforts to politicize the court and to derail it from its mandate."

It also hinted at retaliation.

"The Palestinian Authority needs our cooperation in many fields," said Michael Oren, Israel's deputy minister for diplomacy. "Israel will look very critically at whether such cooperation can continue." 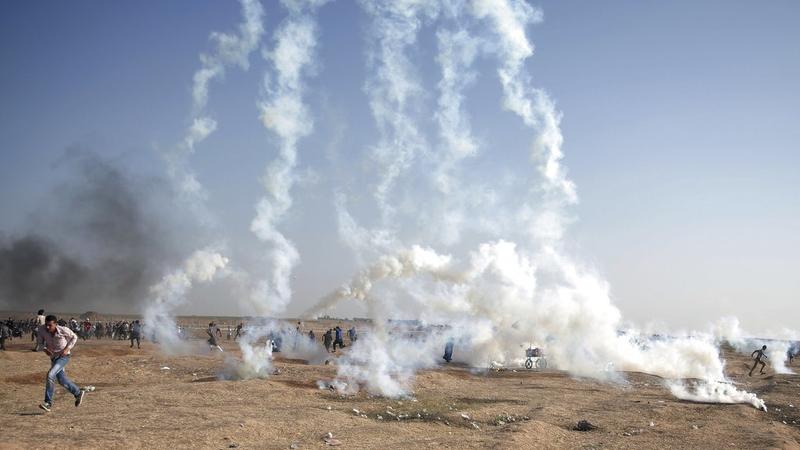 Palestinian protesters run for cover from teargas fired by Israeli troops during a protest at the Gaza Strip's border with Israel, May 15, 2018. (KHALIL HAMRA / AP)

The ICC has been conducting a preliminary inquiry since 2015 in the Palestinian territories, including Israel's settlement policy and crimes allegedly committed by both sides in the 2014 Gaza conflict. Tuesday's referral could speed up a decision on whether to open a full-blown investigation that could ultimately lead to the indictment of high-ranking Israelis. The investigation is also looking at Hamas rocket attacks aimed at Israeli civilian population centers.

Prosecutor Fatou Bensouda said in a statement that the preliminary probe "has seen important progress and will continue to follow its normal course."

She said she must consider "issues of jurisdiction, admissibility and the interests of justice."

In a summary of its referral, the Palestinian Foreign Ministry alleged that Israel maintains and protects its settlements "by committing war crimes, crimes against humanity and the crime of apartheid against the Palestinian people."

Apartheid was the name given to the racist policies of South Africa's former white rulers. It is considered a crime against humanity by the ICC and defined by the court as inhumane acts "committed in the context of an institutionalized regime of systematic oppression and domination by one racial group over any other racial group or groups and committed with the intention of maintaining that regime."

Palestinian Assistant Minister for Multilateral Affairs Ammar Hijazi said the recent Gaza violence pushed the Palestinians into going to the court, adding that it "requires that we take action and this is why we moved in this regard."

Human rights groups say Israel's open-fire orders are unlawful because they allow the use of potentially lethal force against unarmed protesters at times when soldiers face no imminent threat to their lives.

Israel has said it was defending its border and accused Gaza's ruling Hamas militant group of using the unrest to carry out attempted attacks and of using civilians as human shields. Israel also has blamed Hamas for the heavy civilian death toll during the 2014 war.

Israel says it has investigated actions by its forces in the Gaza conflict and has opened a number of investigations into the latest Gaza violence as well. But critics say the probes rarely lead anywhere.

While the ICC can indict suspects, it has no police force and has to rely on cooperation from member states to enforce arrest warrants.

Israel says the criticism of its settlements is unfounded. It says east Jerusalem is an inseparable part of its capital, and considers the West Bank to be disputed territory whose fate should be decided in negotiations. The international community, however, overwhelmingly considers the settlements illegal.

Over 600,000 Israelis live in the West Bank and east Jerusalem — territories sought by the Palestinians as parts of a future state. Israel captured both territories from Jordan in the 1967 Mideast war.

Under international law, it is illegal to transfer populations out of or into occupied territory.

Malki said it was time for the Palestinians to seek redress in court.

"We will not allow injustice to be Palestine's destiny," he said.