Tibetans develop a taste for the West

By Cui Jia and Palden Nyima in Lhasa

Restaurants and cafes thriving in region 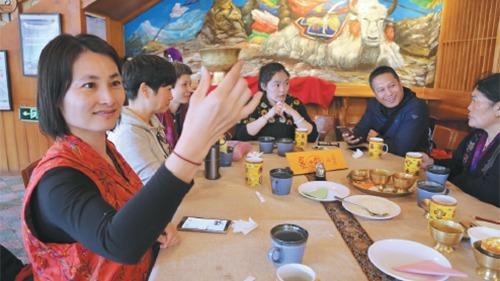 Tourists have lunch in a Westernstyle restaurant in Lhasa, Tibet autonomous region, on May 6. (PALDEN NYIMA / CHINA DAILY)

Dorje didn't even pause to lick his greasy fingers after finishing off a piece of fried chicken.

Instead, he started to run around the KFC restaurant in Lhasa, capital of the Tibet autonomous region, just like any typical 5-year-old.

Dorje's father, Sodar Kunsang, said that since 2016, when the first KFC restaurant opened in Tibet, visiting it had become a "must" during the family's annual trip to the city.

He spoke while trying to lure his son back to the table with a spicy chicken wing, a temptation the young boy could not resist.

As traveling to Tibet has become much easier, we’ve seen different types of restaurant appearing in the region to satisfy different taste buds. I believe having more choice is a step forward

Sitting by a window in the eatery with his wife and Dorje's 7-year-old sister, the father said: "These chicken wings taste really good and different. Both the kids and my elderly mother love them.

"As followers of Tibetan Buddhism, we come to Lhasa every year to pray at the Jokhang Temple, which is close by. Coming to KFC has become part of our new routine. I can still remember seeing people lining up in front of the restaurant when it opened three years ago. It was a significant event back then," said Sodar Kunsang, who hails from the city of Shigatse.

Liang Juan, head of the Tibet branch of food delivery service Meituan, said it is a misconception that the only food on the Qinghai-Tibet plateau is yak meat and highland barley, as there is a variety of cuisines to choose from. The region is a top international tourist destination, which has helped to create diversity in its food markets, especially in recent years.

"Living in Tibet can be just as convenient and modern as other areas of China, especially after great improvements to the transportation infrastructure and communication networks," she said.

"People can order food on their phones and go to quality restaurants that use fresh ingredients sourced from throughout China and the world."

In a region with an altitude of 4,000 meters on average, diners can enjoy Nepalese beef masala, hamburgers, Japanese beef, quality coffee as well as authentic Tibetan and Sichuan cuisine. 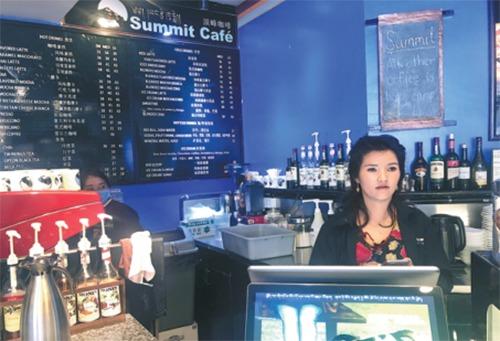 KFC now has more than 5,000 branches on the Chinese mainland since entering it in 1987. Before opening its restaurant in Lhasa city center on March 8, 2016, it was operating in every Chinese province and region, except Tibet.

The fast-food giant considered expanding into Tibet in 2004, but Yum! Brands - KFC's parent company - called off the plan, saying it did not think it would be profitable to operate in the region.

Although high logistics costs have made food at KFC in Tibet more expensive than in other parts of China, its branch in Lhasa, the regional capital, is always packed during the lunch and dinner hours.

Sikar, 24, a hotel receptionist in Lhasa, said: "I still prefer to start my day sipping Tibetan sweet milk tea and eating yak soup noodles at local teahouses, but I enjoy having burgers and fries for lunch. The fact is that Tibetans feel more relaxed gossiping in crowded teahouses than in fast-food restaurants. The vibe is completely different.

"As traveling to Tibet has become much easier, we've seen different types of restaurant appearing in the region to satisfy different taste buds. I believe having more choice is a step forward."

Dorje Nyima opened Xishidong - one of the first Japanese restaurants in Lhasa - last month. "Our main customers are young workers from nearby office blocks as well as tourists, including many from Japan. Older Tibetans rarely dine here," he said. 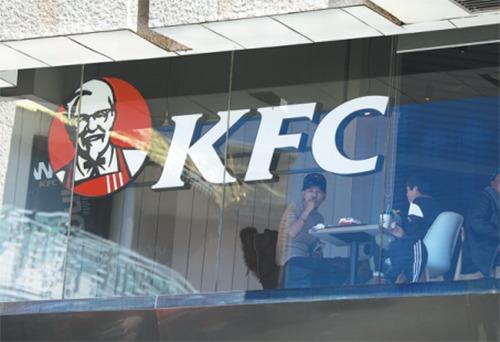 Due to tradition and lack of availability, many Tibetans used not to eat fish, but this is changing.

Dorje Nyima, who has taken cookery lessons in Japan, said: "Young Tibetans love the fish dishes served at the restaurant. It's still not easy to get hold of fresh fish in Lhasa, so we are unable to serve sashimi, but cooked fish is on the menu. For locals who don't eat fish, we have invented yak meat sushi, which has been very popular."

The spices and sauces the restaurant needs to create authentic Japanese cuisine must be shipped from its supplier in Zhejiang province, and it takes about a week for them to arrive in Lhasa by road, he added.

"I can place an order online - it's very easy - but the logistics costs remain high because of Tibet's location. Maybe the planned Sichuan-Tibet railway will help to reduce these costs for businesses."

In 2006, services started on the Qinghai-Tibet railway, the only rail route linking Tibet to other parts of the country.

By the end of February, the railway had recorded 192 million passenger trips and shipped 569 million metric tons of goods. But its freight capacity has been unable to keep pace with advances in Tibet, according to the region's development and reform commission.

As a result, in October, the central government announced plans to construct the Sichuan-Tibet railway.

Aawazman Jubaju, owner of the Third Eye Restaurant, which specializes in Nepalese cuisine, said he can obtain most of the spices he needs from shops in Lhasa run by businessmen from Nepal. When he needs special ingredients from home, frequent flights between Lhasa and Kathmandu, the Nepalese capital, make getting hold of them easier than previously.

"There are now two flights from Lhasa and Kathmandu every day. In the past, there were only two to three flights a month," said Jubaju, who has been running the restaurant for 25 years. 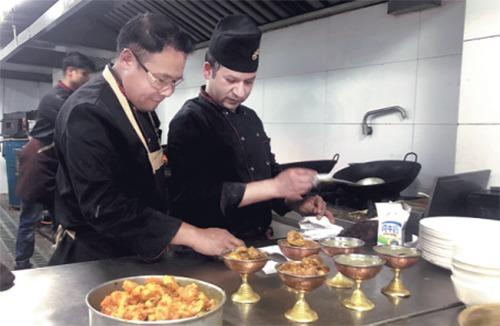 As Nepal borders Tibet, Nepalese cuisine has always been popular among Tibetans as well as with tourists. Since the tourist season in Tibet started earlier this month, the number of visitors at the Third Eye Restaurant has soared, Jubaju said.

"In the past, we only had local customers during the winter, which is traditionally the off-peak travel season. But since the regional government introduced a series of measures to promote winter tourism, my restaurant has been packed throughout the year," he said.

For the past two winters, the regional government has offered free admission to top tourist venues, hotel rooms at half price, and cheaper flights. The region received 2.46 million visits from tourists from Nov 1 to March 15, an increase of 84.2 percent year-on-year, the regional Tourism Development Bureau said.

Traditionally, tourism in Tibet booms between May and October, before the number of visitors falls significantly in winter, resulting in low rates of return on investments in related infrastructure, such as hotels and restaurants.

"Although my restaurant isn't on one of the busiest streets, the locals all know about us. Tourists can also easily locate us with the help of food-rating apps on their phones. All I need to do is provide quality food," Jubaju said.

Liang Juan, Meituan's head in Tibet, said that when the group entered the region in 2016, it was still not covered by the 4G network - the telecommunications technology that people in many areas of the country had already taken for granted.

"Without 4G, both our customers and restaurant owners found it very frustrating when placing and receiving orders on their phones. It was just too slow, no matter how hard they pressed the screen! The speed of delivery was also greatly affected because our riders couldn't receive orders straight away," she said.

This changed in December 2017 when 4G arrived in the region. "Our business was fundamentally transformed after this," Liang said. "Tibetans' lives were also transformed." 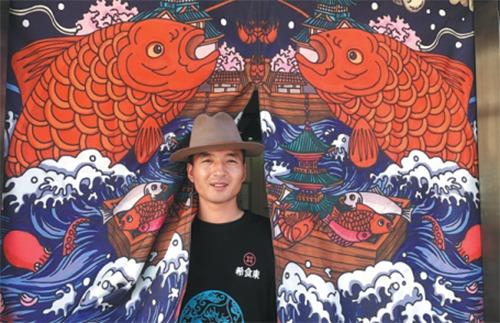 Initially, Meituan only had 10 delivery riders in Tibet, but now has more than 1,000. It has also expanded its delivery zone from Lhasa to five other cities and prefectures as well as four counties. "Some of the areas are at very high altitude, but our delivery charge is the same throughout the region," Liang said.

"At first, our customers were mainly tourists or businesspeople who were regular Meituan users at home. But locals have gradually accepted the concept and started to use our services."

The platform receives more than 30,000 orders a day on average and Liang is busy recruiting new delivery personnel to meet the rising demand. "The most popular food people order in Tibet is fast-food such as KFC and porridge," she added.

In Tibet, where rigorous environmental protection standards are enforced, the use of plastic bags is banned, so all restaurants are required by Meituan to use recyclable paper containers and bags. "Although we are the newest member of the Meituan delivery family, we are pioneers in environmental protection, which Tibetans naturally attach great importance to," Liang said.

Tibet's food scene will not only become more diverse in the future, more quality food will become available.

Uma, owner of the Itagelato Cafe in Lhasa, said competition is already fierce as the region undergoes rapid economic development and people have more money to spend.

"Locals love to sit down and spend time at my cafe instead of ordering takeaways. I can feel the competition, as many new cafes are opening in Lhasa," she said.

"To stay ahead of the game, I select the best beans and have them shipped to Lhasa to serve my customers so they can have a cup of good coffee even when they are on the 'roof of the world'."

Sikar, the receptionist, said many tourists still find it surprising when she tells them there is a KFC restaurant and a lovely cafe, just around the corner and they can also order takeaways on their phones.

"Why not? They are a part of our lives, too," the young Tibetan said.