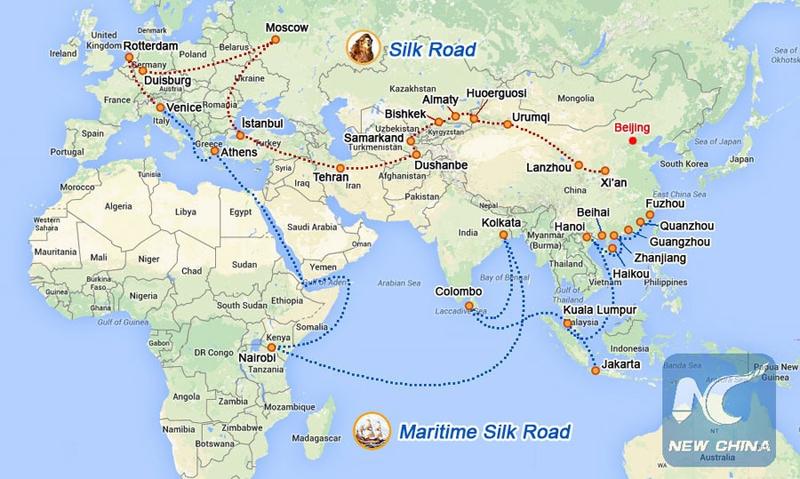 This map shows the countries along the Silk Road Economic Belt and the 21st Century Maritime Silk Road, collectively known as the Belt and Road initiative. (PHOTO / XINHUA)

HONG KONG — The China-proposed Belt and Road Initiative entered its fifth year in 2018, offering fresh impetus to economic development and integration in the Asia-Pacific region, while bringing tangible benefits to the people along the route.

The initiative, proposed in 2013, refers to the Silk Road Economic Belt and the 21st Century Maritime Silk Road. It is aimed at building a trade and infrastructure network connecting Asia with Europe and Africa along ancient trade routes.

The Belt and Road Initiative has generated significant interest among countries in the region, given their substantial infrastructure needs and China's ability to offer the expertise to deliver large-scale infrastructure projects

A series of important achievements have been made in the development of major infrastructure connectivity projects under the Belt and Road Initiative during 2018.

In early December, the first T-shaped concrete beam of the China-Laos railway was successfully erected in Lao capital Vientiane. It marked a key milestone as the construction has been transferred from substructure to superstructure, according to the constructor China Railway No 2 Engineering Group.

The construction of China-Laos railway, the first overseas route to connect with the railway system in China, starts from Boten (the northern Lao town bordering China), connects with the Chinese Yuxi-Mohan Railway in Yunnan province to the north, and reaches Vientiane in the south.

It is expected to open by the end of 2021, slashing the travel time between Kunming, the capital city of Yunnan province, and Vientiane to half a day. 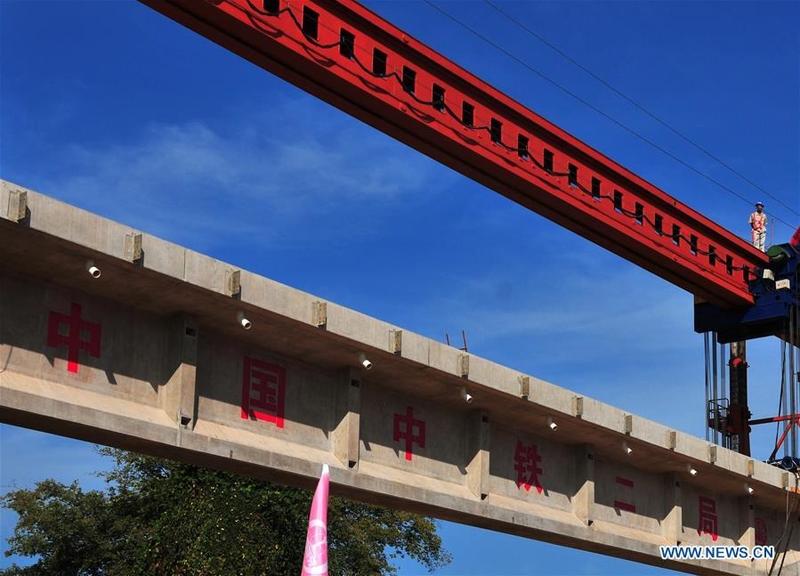 Another key connectivity project under the Belt and Road Initiative, the Jakarta-Bandung high-speed railway in Indonesia, also entered the stage of comprehensive implementation in June this year.

The project licensing, financing and land acquisition have been put in place, and the construction of 22 controlling works has made breakthrough, according to China Railway.

The 142.3 km-long project will connect Indonesia's capital Jakarta and West Java province's capital Bandung in the southeast. With a speed of 350 km per hour, the Chinese-technology high-speed train is capable of cutting traveling time between the two cities to about 40 minutes from over three hours.

Currently, over 2,000 local employees are working for the project and the number is expected to increase further, according to the Chinese company.

Meanwhile, along the China-Pakistan Economic Corridor (CPEC), a major pilot project under the Belt and Road Initiative, a series of infrastructure projects have also been completed.

Among them, the first section of the 392-km Multan-Sukkur Motorway, the largest transportation infrastructure project under CPEC, was inaugurated in May this year.

The 33-km section spanning from Multan to Shujaabad city was completed ahead of schedule, and the whole project is expected to be completed by August 2019. 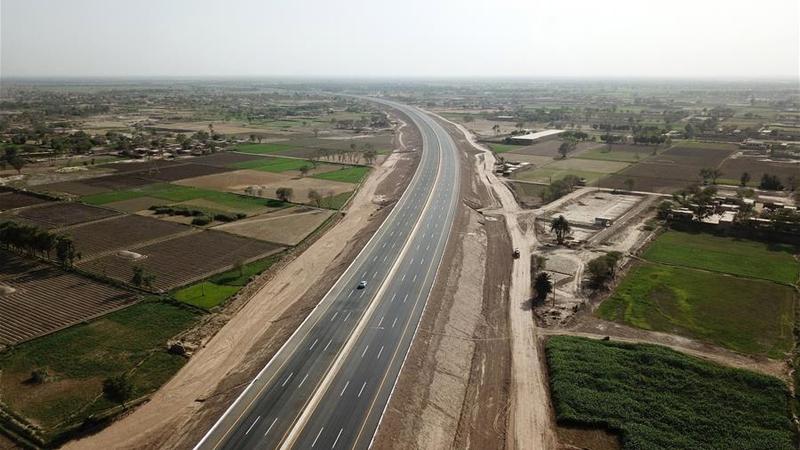 This May 25, 2018 photo shows the Multan-Shujaabad section of the Multan-Sukkur Motorway in Multan, Pakistan. (PHOTO / XINHUA)

The CPEC, a corridor linking Pakistan's Karachi and northwestern Peshawar and running through the populated provinces of Punjab and Sindh, highlights energy, transport, industrial cooperation and Gwadar port construction, and seeks to expand cooperation to such sectors as finance, science and technology, education, poverty alleviation, and urban planning.

In August this year, the China-Maldives Friendship Bridge opened to traffic. It is the first cross-sea bridge in the Maldives and an iconic project of the two countries in co-building the 21st Century Maritime Silk Road.

Connecting the capital Male and neighboring Hulhule island where the Maldives' main international airport is located, the 2-km bridge makes it possible for locals and tourists to transfer between the two islands on land within five minutes.

"The boat ride between the two islands was affected by many factors such as the weather. I used to have difficulties in getting to school in Male on time. I would be very anxious about reaching on time because of the unpredictability of the weather," local school girl Aisha (alia) said.

However, Aisha can now ride her father's motorcycle every morning and arrives at school in 10 minutes.

"Reaching in 10 minutes was impossible before the bridge was opened to traffic," she said. 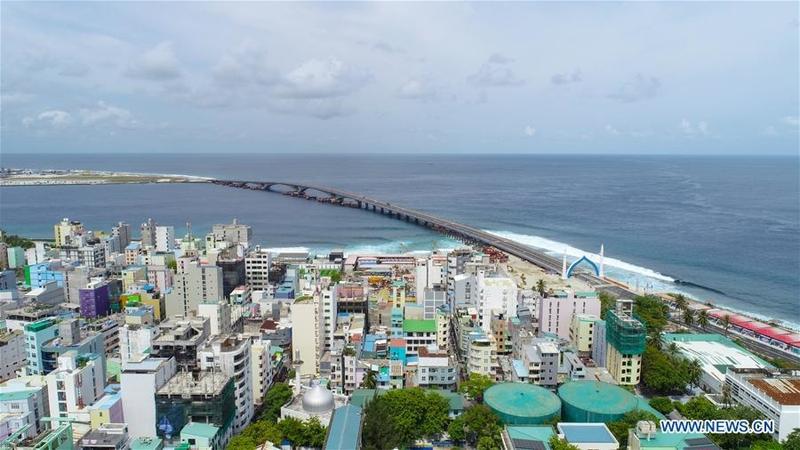 Rehendhi Rabindan, a foreman in a restaurant in Hulhumale, said the bridge helped bring more customers to his restaurant.

"On weekends, many people living in Male come here for dinner. The staff are constantly busy," he said, adding that "Many guests who live in Male could order takeaways and pick up the food within 10 minutes."

While some projects bring daily convenience and business opportunities to locals, some others are literally a game changer for those struggling in hardship.

In Pakistan's southwestern port city of Gwadar, 15-year-old boy Akbar was both excited and relieved to learn about a new seawater desalination plant which was inaugurated in July this year.

Gwadar had been plagued with acute water scarcity, and Akbar used to stand on the roadside in the scorching sun for hours to wait for a water tanker to stop by. Locals had been forced to fetch water from dams far away, or spend a large part of their income buying water from private water tankers.

In May this year, the China Overseas Ports Holding Company, the operator of Gwadar port, agreed with the local government to provide the latter with 300,000 gallons of drinkable desalinated water daily.

The government has been distributing the water freely through its pipelines to about 4,000 local households.

"The water is free and their water is very good," Akbar said.

With China now a major contributor to global growth, the Belt and Road Initiative could help strengthen links within the 10-member Association of Southeast Asian Nations (ASEAN), and South Asia's with China, Standard Chartered Global Research said in a report issued in October.

The Belt and Road Initiative has generated significant interest among countries in the region, given their substantial infrastructure needs and China's ability to offer the expertise to deliver large-scale infrastructure projects, it said.

Chinese Premier Li Keqiang (fifth from left) poses for a group photo with other leaders at the 21st China-ASEAN (10+1) summit in Singapore, Nov 14, 2018. (PHOTO / XINHUA)

According to Nepali Prime Minister K.P. Sharma Oli, "Cooperation in trade and connectivity will create jobs for the people, multiply economic opportunities and enhance the productivity of the entire economy. These are vital components for sustainable regional cooperation as well."

Nepal and China signed a Memorandum of Understanding on bilateral cooperation under the framework of the Belt and Road Initiative in 2017.

While the locus of economic development shifts to Asia, BRI (Belt and Road Initiative) can be an engine for a new wave of globalization

"While the locus of economic development shifts to Asia, BRI (Belt and Road Initiative) can be an engine for a new wave of globalization," Oli said in September.

Meanwhile, for many Pacific island nations, the Belt and Road Initiative is a platform through which they can be better connected to the global economy.

Papua New Guinea (PNG), the host of this year's Asia-Pacific Economic Cooperation (APEC) economic leaders' meeting, joined the Asian Infrastructure Investment Bank in May, and became the first Pacific island country to sign a memorandum of understanding with China on the Belt and Road cooperation in June.

PNG Prime Minister Peter O'Neill told Xinhua recently that "for international developing countries like PNG, this (the Belt and Road Initiative) is a great initiative because of the access to capital and infrastructure-building capacities that we are now developing together with China. It is able to open up markets and improve the standard of living for our people."

In November, the tropical nation of Fiji also signed a memorandum of understanding with China on cooperation within the Belt and Road framework.

The Belt and Road Initiative is "very important for the future development of the world, especially for the small developing nations that are remote and lack in their social and economic development, looking for avenues and support to link themselves to the rest of the world," Keshmeer Makun, lecturer at the Fiji National University's School of Economics, told Xinhua in an earlier interview.