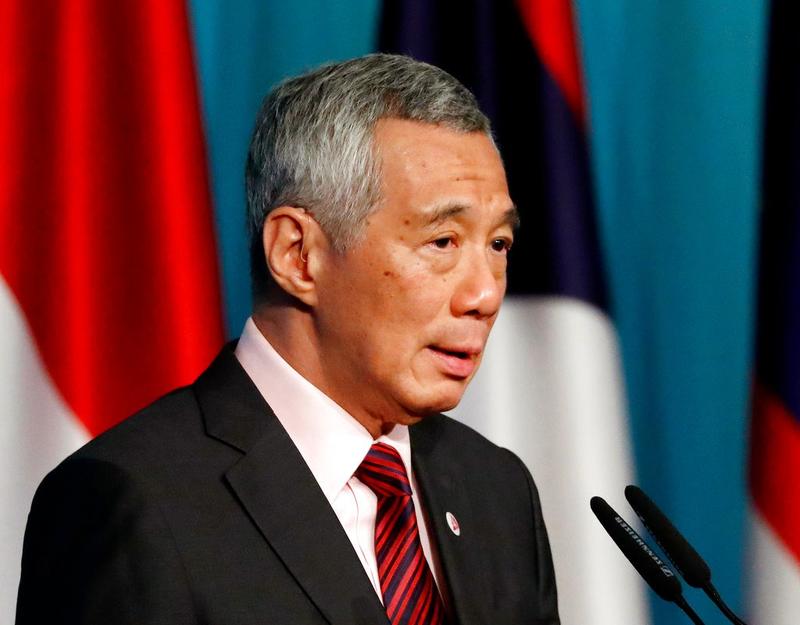 SINGAPORE — Modern city-state Singapore is a predictable place: it’s hot and humid every day, unabashedly pro-business, immaculately clean -no chewing gum anywhere - and the government is usually run by a Lee.

Last week, the wheels of change were set in motion through an opaque reorganization within the ruling People’s Action Party (PAP), a move that put in place the likely successor once Prime Minister Lee Hsien Loong steps aside.

Prime Minister Lee, the son of Singapore’s founding father, Lee Kuan Yew, is nearly 67 and has said he will step down by the time he is 70.

Having held power since 2004, he is widely expected to go after an election that must take place by early 2021, and the end of the Lee era will pitch Singapore into a rare state of flux at a sensitive time.

Singapore’s economic model is under threat, there is unease over inequality in the land of ‘Crazy Rich Asians’, and social media has given critics of the government - both genuine and fake - a platform that they’ve never had before.

Since its separation from Malaysia in 1965, Singapore has become a rich, tiny rock of stability, surrounded by large, mostly Muslim, and politically less predictable neighbors.

Living on an island of 5.6 million people, the only country in Southeast Asia where ethnic Chinese are in majority, Singaporeans are very conscious of the value of stability and security.

That awareness, along with an appreciation of their relative prosperity, helps explain an ingrained reluctance to rock the boat. The PAP has won every election since Singapore’s independence over half a century ago and there is no sign that the party’s position is in jeopardy.

But its leaders are not taking anything for granted, especially after a political earthquake in next-door Malaysia, where a party that had led every post-colonial government suffered a humiliating election defeat in May.

“The ruling party, the PAP, does not have a monopoly of power, does not have the right to rule Singapore indefinitely,” Prime Minister Lee said days after the Malaysian vote.

Lee is only Singapore’s third prime minister after his father and Goh Chok Tong, who had to contend with speculation he was a seat-warmer for the younger Lee - who served as deputy prime minister during his 14 years in charge.

Lee, 66, has already said he does not think any of his four children will enter politics. It is unclear whether Lee will withdraw from politics completely or retain influence as a senior statesman, as both Goh and his father had done.

Succession in Singapore had previously been decided over cake and coffee, years in advance, but this time it was left up to a group of sixteen ministers, dubbed the fourth generation, or 4G, to pick among themselves - a process that has been compared to how cardinals pick the pope.

The process concluded last Friday, when finance minister Heng Swee Keat, 57, was given a key position within the party’s top decision making body and declared “first among equals”.

Asked if Heng would take over as PAP leader once Lee steps aside, a party spokesman directed Reuters to local media reports which described him as the frontrunner or leader of the younger 4G ministers. He did not provide further comment.

A jovial, bespectacled former central banker, Heng is seen as a ‘safe pair of hands’ - especially given one of Singapore’s most immediate challenges is keeping its open economy on an even keel in the face of rising protectionism and trade disputes between global powers.

Commentators in Singapore’s largely pro-government mainstream media noted that the PAP went to great lengths to stress its unity behind Heng, who in 2016 had suffered a stroke and collapsed during a cabinet meeting.

“There is no reason to expect that the PAP - which has stayed cohesive for most of the 59 years it has been in power - might not one day face such divisions.”

Former PAP lawmaker Inderjit Singh said the next election will be a “referendum” on the untested new leadership team.

“None of the 4G leaders have delivered ground breaking policy initiatives...So it is important for the 4G leaders to show...their own initiative of delivering policies that satisfy Singaporeans and they have to do it fast,” said Singh.

“If they fail, trust (in the PAP) will be eroded, and this could change the political landscape of Singapore.”

Recently popularized by Hollywood film Crazy Rich Asians, Singapore has some of the highest paid politicians in the world, partly to attract top drawer candidates to public service and partly to remove the temptations of corruption.

Singapore’s rapid growth from colonial backwater to low-tax, financial hub has lifted all boats, and its poor are still far better off than they would be in neighboring countries.

But there are rising concerns over inequality, particularly as its society is aging rapidly.

Social media has given more space for criticism and dissent, and the PAP’s political transition comes as Singapore steps up its battle against so-called “fake news”.

In recent weeks, authorities have blocked access to a foreign-based news site, lambasted social media firm Facebook for failing to take down a post, and seized equipment from local blog The Online Citizen (TOC) in a defamation investigation.

These incidents have strengthened calls from some lawmakers for legislation to tackle what they term ‘deliberate online falsehoods’.

“The reaction in recent times have been excessive,” TOC’s editor Terry Xu told Reuters. “Typically, the Singapore government would just issue a general libel or rebuttal.”

Robust discussions, including criticism of the government, take place every day on various platforms. But we will not allow the integrity of our public institutions to be impugned under the cover of free speech

Following the TOC incident, Human Rights Watch said in a statement it was concerned “rights abusing attacks against freedom of expression will get worse as the ruling PAP contemplates a possible election in 2019”.

Reporters Without Borders, which ranks Singapore below Russia and Myanmar for press freedoms, also raised concerns about the TOC incident and the potential for a tougher government stance on the media as elections near.

A spokeswoman for Singapore’s communications ministry said in an emailed statement the TOC investigation “is in no way related to elections”, adding:

“Robust discussions, including criticism of the government, take place every day on various platforms. But we will not allow the integrity of our public institutions to be impugned under the cover of free speech.”

Gillian Koh of the Institute of Policy Studies, one of the experts cited in a recent parliamentary report on fake news that recommended more legislation, said the upcoming election is “an important factor” for lawmakers.

Singapore’s vulnerabilities, given its diverse society, the risk of terror threats, and its position as a financial hub were other strong reasons for bringing in such laws, she said.

The government’s latest run-ins with media “strengthen the government’s case”, Koh said, but she added that pursuit of stronger laws may also fuel cynicism that it was driven by “partisan interests.”