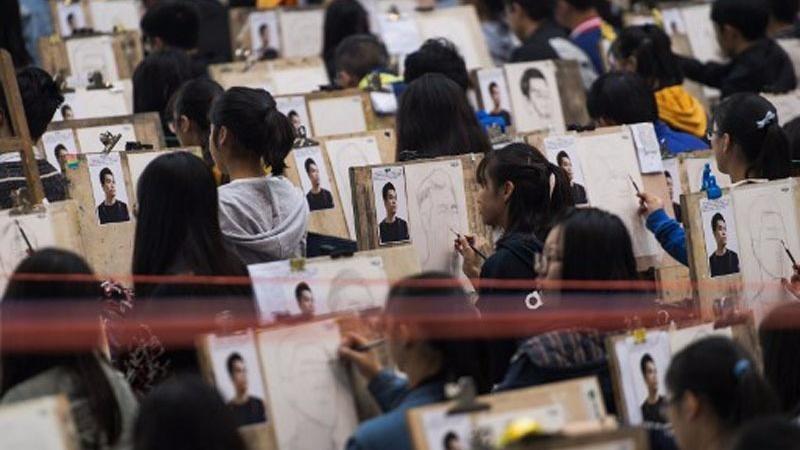 This photo taken on Oct 29, 2017 shows students drawing during a simulation of college entrance exam for art major at Hubei University in Wuhan, in China's central Hubei province. (STR / AFP)

China has made significant progress in curbing female illiteracy, according to a white paper on Thursday.

Released by the State Council Information Office to mark the 70th anniversary of the People's Republic of China in October, the report lauded the progress in several chapters - alongside other gender equality and women's welfare improvements - in a host of areas, ranging from financial and political status to maternal health.

The illiteracy rate among women aged 15 and older has seen a drastic decline over the last 70 years, from 90 percent to 7.3 percent as of 2017, according to the report

The illiteracy rate among women aged 15 and older has seen a drastic decline over the last 70 years, from 90 percent to 7.3 percent as of 2017, according to the report.

It said the enrollment rate for girls in primary school reached 99.9 percent, a sign that gender bias has been basically eliminated in a large chunk of China's nine-year compulsory education.

For higher education, 52.5 percent of college students were women in 2017, which was 32.7 percentage points higher than in 1949. Women's presence in graduate schools and nonacademic training are also on the rise.

The progress matters because it helps women actualize their values, and their education level can influence the younger generation, according to Meng Man, professor of history and culture at Beijing's Minzu University of China.

"Schoolgirls are not only builders of China but also mothers of the future," she said at a news conference on Thursday.

Equal access to education and other development opportunities for women are constitutional rights in China.

In 1996, education authorities released a landmark guideline to curb girls' dropout rate in rural areas and among impoverished ethnic communities, where school opportunities, if any, were generally saved for boys.

In the decade that followed, the central government rolled out policies to subsidize schoolgirls from financially strapped families and to exempt them from fees including school accommodation and textbooks while receiving free compulsory education.

School attendance was also underscored in the report as China works to eliminate absolute poverty before 2021. Girls are more vulnerable to dropping out of school than boys, and efforts to keep them in school are seen as essential to eradicating poverty.