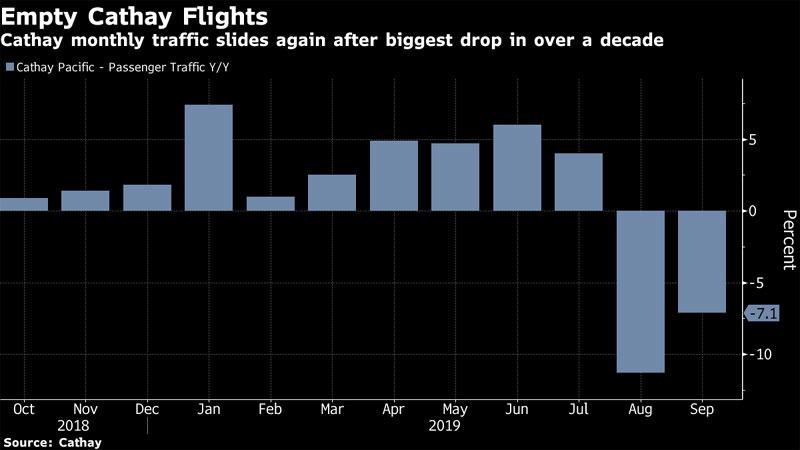 Cathay Pacific Airways cut its earnings outlook after passenger traffic fell for a second month as protests that have put intense pressure on the carrier continued to disrupt travel and business in Hong Kong.

Second-half financial results will be lower than those of the first half, the Hong Kong-based airline said in a statement Friday, reversing previous forecasts. Cathay also reported a second straight monthly drop in the number of passengers carried and warned of a “significant” decline in inbound bookings for the rest of this year, especially from the Chinese mainland and other Asian markets.

“Our expectation is that rest of 2019 will remain incredibly challenging for the airline,” Chief Customer and Commercial Officer Ronald Lam said in the statement. “The mainland China market has been hit especially hard. Intense competition together with an increasing reliance on transit passengers over the short term has continued to apply additional pressure on yield.”

Cathay, the world’s worst-performing major airline in the past three months, continued to fall. The stock dropped 1.2% to HK$10.06 at 1:02 pm in Hong Kong, though it was little changed from where it was before the announcement.

Unrest in Hong Kong has led to a slump in visitors, particularly from the Chinese mainland, which accounts for the bulk of tourists. Demonstrations spread to the airport at times, crippling operations there and causing hundreds of flight cancellations.

The company said in August that second-half earnings would be better than those of the first six months. But then it reported passenger traffic tumbled 11%, the most in a decade, in August and 7.1% in September.

Cathay has frozen headcount and reduced capacity for the winter season due to weaker demand.