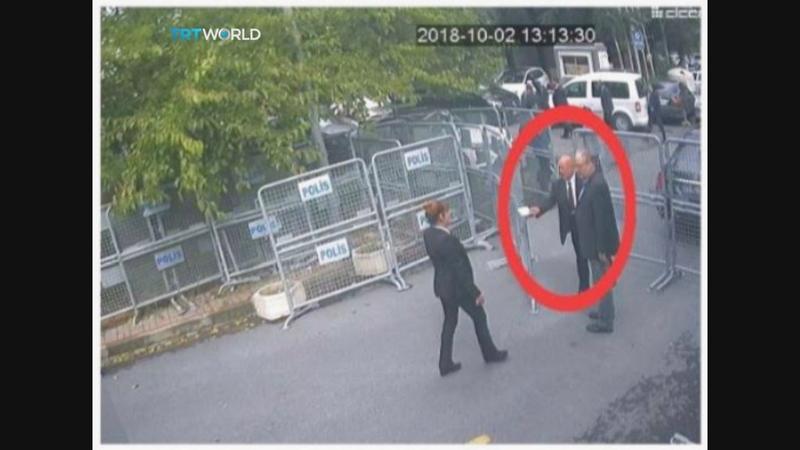 This image taken from CCTV video obtained by the Turkish broadcaster TRT World and made available on Oct 21, 2018 purportedly shows Saudi journalist Jamal Khashoggi, being allowed to pass barriers that block the road leading to the Saudi consulate in Istanbul before entering, Oct 2, 2018. (CCTV/TRT WORLD VIA AP)

ISTANBUL — Saudi journalist Jamal Khashoggi was strangled as soon as he entered the Saudi consulate in Istanbul as part of a premeditated killing, and his body was dismembered before it was removed, a top Turkish prosecutor said Wednesday.

In accordance with plans made in advance, the victim, Jamal Khashoggi, was strangled and killed immediately after entering the Consulate General of Saudi Arabia.

The statement was the first public confirmation by a Turkish official that Khashoggi was strangled and mutilated after he entered the Saudi Consulate on Oct 2. It also pointed to a lack of cooperation from Saudi officials in the investigation of the slaying.

"In accordance with plans made in advance, the victim, Jamal Khashoggi, was strangled and killed immediately after entering the Consulate General of Saudi Arabia," the prosecutor's office said.

"The victim Jamal Khashoggi's body was dismembered and destroyed following his death by suffocation, again in line with the advance plans," the two-page statement read.

The prosecutor's statement that Khashoggi was killed immediately conflicts with a report by pro-government newspaper Yeni Safak earlier this month, which cited what it described as an audio recording of Khashoggi being tortured before being killed. The newspaper claimed that his fingers were cut off and that he was killed by being beheaded.

Trump, who made Saudi Arabia the destination of his first foreign trip as president, said the Saudis didn't betray him but "maybe they've betrayed themselves." Trump told reporters at the White House on Wednesday: "I just hope it all works out." 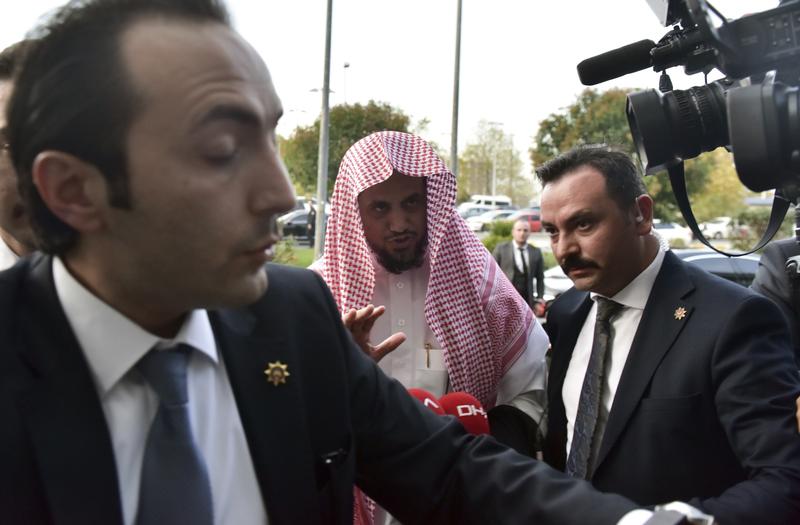 Saudi Arabia's chief prosecutor Saud al-Mojeb reacts to journalists as he boards a plane to leave Turkey, in Istanbul, Oct, 31, 2018. The office of Chief Istanbul prosecutor said on Wednesday that Saudi journalist Jamal Khashoggi was strangled as soon as he entered the Saudi Consulate in Istanbul on Oct 2, 2018. (DHA VIA AP)

Turkey is seeking the extradition of 18 suspects in the journalist's slaying who were detained in Saudi Arabia. It also is pressing Saudi Arabia for information about who ordered Khashoggi's killing and the location of his remains.

Turkish President Recep Tayyip Erdogan has called on Riyadh to disclose the identity of an alleged local collaborator said to have been involved in getting rid of Khashoggi's body.

Saudi Arabia has not commented directly on the prosecutor's visit and al-Mojeb did not respond to journalists' questions at the airport as he departed.

Fidan's office said the Saudi delegation submitted a written statement and invited the Turkish delegation to come to Saudi Arabia bringing "evidence obtained during the course of the investigation."

The Saudi representatives said the whereabouts of Khashoggi's remains and whether the killing was premeditated or not would only come to light through a joint interrogation by Turkish and Saudi investigators, according to the statement.

The statement said Turkey renewed its request for the 18 suspects to be extradited. It did not say if Turkish officials would travel to Saudi Arabia.

On Wednesday, a lawmaker and spokesman for Turkey's ruling party again called on Saudi Arabia to reveal where Khashoggi's body is, who gave the orders for the killing and who the alleged Turkish collaborator is.

"Instead of trying to find out what (evidence) Turkey has, Saudi authorities should give the answers to these questions," Omer Celik told reporters. "This is not an incident that could have taken place without a high-level order." 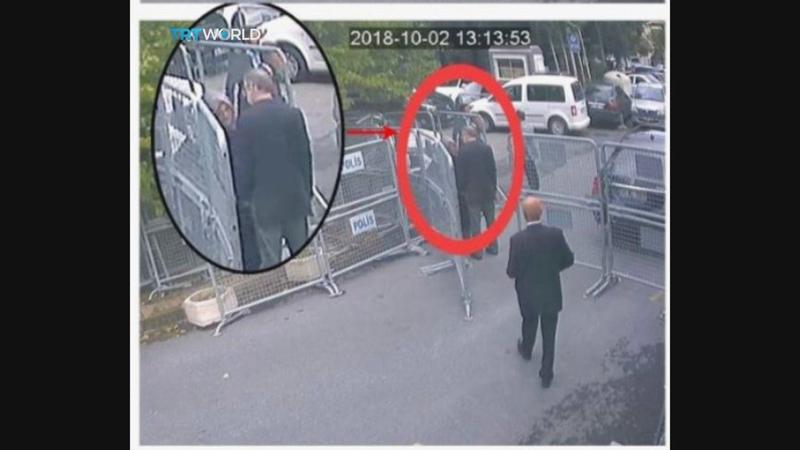 This image taken from CCTV video obtained by the Turkish broadcaster TRT World and made available on Oct 21, 2018 purportedly shows Saudi journalist Jamal Khashoggi talking to his fiancé Hatice Cengiz, seen in expanded view, before entering the Saudi consulate in Istanbul, Oct 2, 2018. (CCTV/TRT World via AP)

Celik added: "We are not blaming anyone in advance but we will not allow anything to be covered up."

Khashoggi, a 59-year-old columnist for The Washington Post, vanished after entering the consulate in Istanbul to pick up paperwork he needed for his upcoming marriage. His Turkish fiancee was waiting for him outside. A critic of the Saudi crown prince, Khashoggi had been living in exile in the United States.

Turkey alleges a hit squad from Saudi Arabia — including a member of Saudi Crown Prince Mohammed bin Salman's entourage during a trip to the United States— went to Istanbul to kill the journalist and then tried to cover it up.

Hurriyet newspaper columnist Abdulkadir Selvi, who is known to be close to the Turkish government, said the Saudi prosecutor revealed nothing new to Turkish investigators during his three-day visit and left with several questions unanswered.

"Rather than share the information he has, the Saudi prosecutor tried to learn what information and evidence Turkey has in its hands," Selvi wrote Wednesday.

He added: "The chief prosecutor is not trying to shed light on the murder, he is trying to save the crown prince."