Hands off Hong Kong, you meddling US politicians 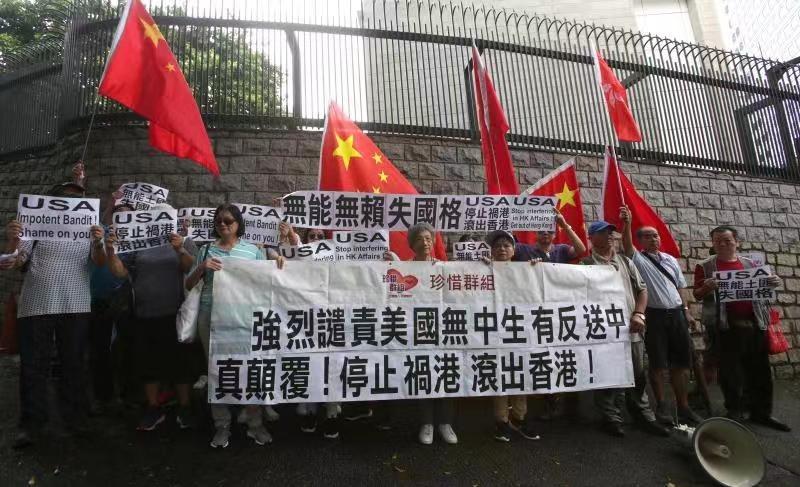 A group of residents stage a petition outside the US Consulate General in Hong Kong and Macau in Central district, Hong Kong, to oppose the US meddling in Hong Kong affairs, Aug 3, 2019. (PHOTO / CHINA DAILY)

BEIJING - Some politicians from the United States have recently come out to bolster radical rioters in the Hong Kong Special Administrative Region. They must withdraw their dirty hands from meddling in Hong Kong affairs any further.

They (some US politicians) chose not to see just and righteous actions taken by the HKSAR government and police, just as they kept mum on the prevalence of police brutality in their own country

It began with some people touting violent acts as "peaceful demonstrations" and then Nancy Pelosi, speaker of the US House of Representatives, blatantly lent her support to violent lawbreakers.

The words and deeds of some people in the United States once again exposed their ill-intention to harm Hong Kong and disrupt China.

Violence is a poison to the rule of law, turmoil an enemy to prosperity.

People like Pelosi turn a blind eye to the lawless deeds done by violent radicals. They chose not to see just and righteous actions taken by the Hong Kong Special Administrative Region government and police, just as they kept mum on the prevalence of police brutality in their own country.

When they stir up violence in Hong Kong using "democracy" and "freedom" as a pretext, do they have any sense of shame?

Hong Kong belongs to China, and this is something that will never change.

No attempt to interfere in Hong Kong affairs and jeopardize the stability of Hong Kong will succeed. It will be firmly opposed by nearly 1.4 billion Chinese people including Hong Kong compatriots.