Russia, Turkey to work together on rebuilding Syria 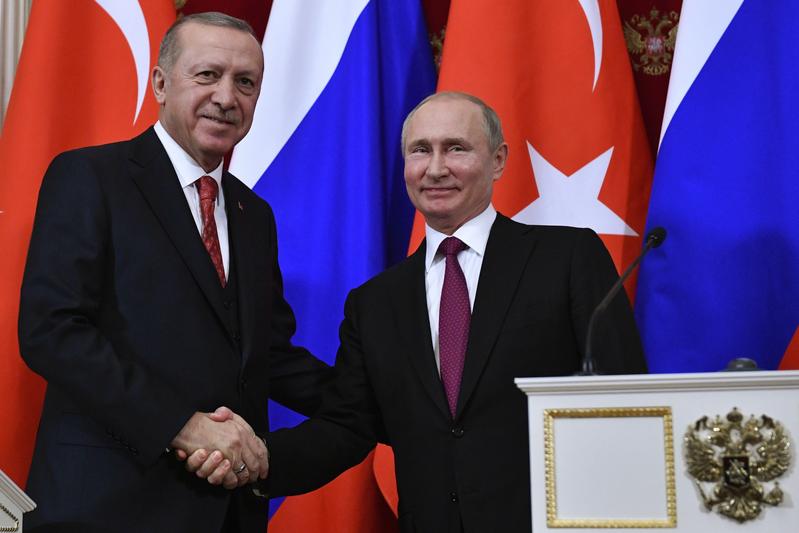 "The cooperation of Russia and Turkey in the post-conflict reconstruction of Syria is important. We agreed with Mr President that the military and diplomats of the two countries will continue coordinated efforts in this direction..." Putin said at a joint press conference, according to a Kremlin transcript.

He stressed the two countries' principled stance of seeking to achieve a "sustainable solution" to the Syrian crisis on a political and diplomatic basis in accordance with the relevant United Nations resolution and in strict compliance with Syria's sovereignty and territorial integrity.

In particular, Putin and Erdogan exchanged views on further steps to stabilize the situation in the Syrian province of Idlib, the last major rebel-held region in Syria, including the fight against terrorism and the creation of a demilitarized zone.

"We need to work together, jointly, in order to finally relieve tensions in the area... We believe that keeping the cessation of hostilities in place should not harm the fight against terrorists," Putin said.

The two presidents underlined the importance of the withdrawal of US military from Syria.

"If such steps and plans are really implemented, it will be a positive step and will help stabilize the situation in this troubled region," Putin said.

The US administration announced in December that it was planning to withdraw its troops from Syria. Moscow has repeatedly called on Washington to elaborate its detailed plans in this regard.

"What is crucial here is to not allow the creation of a power vacuum after the withdrawal of US forces," Erdogan said at the press conference.

According to Kremlin, Putin and Erdogan paid special attention to the issue of the establishment of the Syrian constitutional committee dedicated to promoting a constitutional reform in the country, which was created at the Syrian National Dialogue Congress held in Russia in the beginning of last year.

"Thanks to our efforts, a solid and balanced foundation was laid for launching a sustainable and viable process of political settlement," Putin said.

In December, Putin said the establishment of the committee is reaching the final phase and the actual political settlement in Syria could start this year.

The two heads of state also discussed the Astana format, which remains the "most effective mechanism" for settling the conflict in Syria, Putin said.

The Astana process was launched by Russia, Turkey and Iran in the Kazakh capital of Astana in Junuary 2017 to bring all warring parties in the Syrian conflict to the table to find a political solution as a complementary part of the UN sponsored peace talks in Geneva.

Putin hailed the positive results in previous Russian-Turkish-Iranian summits in the framework of the Astana process and said that another trilateral meeting will be arranged soon.

"We are preparing to organize in the near future another such summit in Russia. We will need to coordinate this with our Iranian partners," Putin said.