Taliban: US, Taliban deal will not stop attacks on Afghan forces 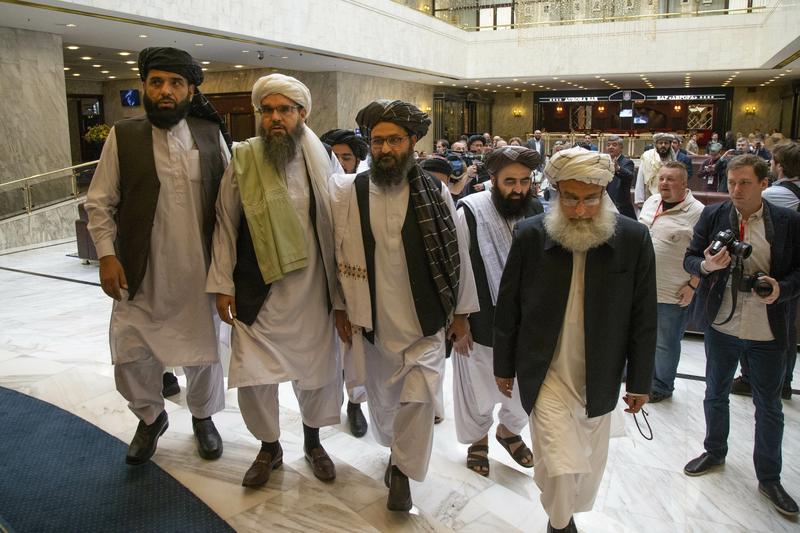 In this May 28, 2019 photo, Mullah Abdul Ghani Baradar, the Taliban group's top political leader, third from left, arrives with other members of the Taliban delegation for talks in Moscow, Russia. (ALEXANDER ZEMLIANICHENKO / AP)

KABUL/PESHAWAR, Pakistan — As US and Taliban negotiators push to wrap up talks aimed at securing the withdrawal of foreign forces from Afghanistan, Taliban sources say a pact will not mean an end to fighting with the US-backed Afghan government.

"We will continue our fight against the Afghan government and seize power by force," said a senior Taliban official

US and Taliban officials have been negotiating in Qatar since last year on an agreement centred on the withdrawal of US forces, and an end to their longest-ever war, in exchange for a Taliban guarantee that international militant groups will not plot from Afghan soil.

US negotiators have been pressing the Taliban to agree to so-called intra-Afghan talks, meaning with the Kabul government and a ceasefire, but a senior Taliban official said that would not happen.

"We will continue our fight against the Afghan government and seize power by force," said the Taliban commander on condition of anonymity.

US President Donald Trump is impatient to get US forces out of Afghanistan and end the 18-year war that was launched after the Sept 11, 2001, attacks on the United States.

But there are fears among Afghan officials and US national security aides that a US troop withdrawal could see Afghanistan plunged into a new round of civil war that could herald a return of Taliban rule and international militants, including Islamic State, finding a refuge.

Another Taliban commander, who also declined to be identified, said a deal was expected to be signed this week under which US forces will stop attacking the Taliban and the militants would end their fight against the US troops.

Under the pact, the United States would also cease supporting the Afghan government, the Taliban officials said.

"The Americans will not come to the assistance of the Afghan government and its forces in their fight against us," the first Taliban official said.

US officials involved in the negotiations were not available for comment.

The US special envoy for reconciliation in Afghanistan, Zalmay Khalilzad, has been pressing the Taliban to make a commitment to power-sharing talks with the government and to announce a ceasefire.

The Taliban, fighting to expel foreign forces and re-establish a theocratic Islamic state since their ouster in October 2001, have refused to talk to the government, denouncing it as a US puppet although they have raised the possibility of negotiations after the deal on the US withdrawal is struck.

In this Feb 8, 2019 photo, Special Representative for Afghanistan Reconciliation Zalmay Khalilzad smiles at the US Institute of Peace, in Washington. (JACQUELYN MARTIN / AP)

The militants now control more territory than they have since 2001 and the war has ground into a stalemate with casualties rising among civilians as well as combatants.

There has been no let-up in the fighting over the past year despite the talks. The United States had not stopped conducting air strikes and helping Afghan forces to destroy camps run by the Taliban and Islamic State fighters, a US official said.

Two diplomatic sources with knowledge of the ninth round of talks in Qatar said they expected an agreement to be finalised this week, enabling the US to pull out about 50% of its forces.

An end to the fighting between the Taliban and Afghan government forces would have to be negotiated separately, they said.

"A ceasefire between the Afghan forces and the Taliban requires a separate agreement and deliberations are yet to begin," said one diplomat who has been monitoring the negotiations in Qatar.

"The US-Taliban agreement will stop US from conducting air strikes on the Taliban, and the Taliban will stop insider attacks on the US and other foreign soldiers," the diplomat said.

Suhail Shaheen, a spokesman for the Taliban political office in Doha, said negotiations have gone on late into Sunday.

The two sides would meet again later on Monday after internal talks in the morning, Shaheen said.

"Our meeting with the US team will resume in the early evening," he said.

Most issues had been resolved but a formal agreement had yet to be concluded, he said.