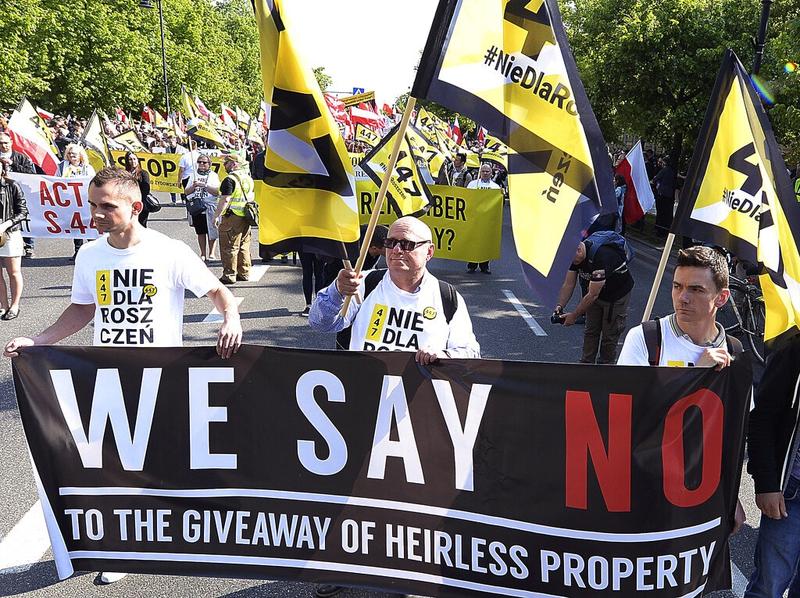 Thousands of Polish nationalists march to the US Embassy, in Warsaw, Poland, May 11, 2019. Thousands of Polish nationalists have marched to the US Embassy in Warsaw, protesting that the US is putting pressure on Poland to compensate Jews whose families lost property during the Holocaust. The protesters included far-right groups and their supporters. They said the United States has no right to interfere in Polish affairs and that the US government is putting "Jewish interests" over the interests of Poland. (CZAREK SOKOLOWSKI / AP)

WARSAW, Poland — The Polish government has canceled a visit by an Israeli delegation, saying the Israeli government made last-minute changes that suggested it would focus on the issue of the restitution of former Jewish property.

The delegation was to have been headed by Avi Cohen-Scali, director general of the Israeli Ministry for Social Equality, and the visit was scheduled for Monday, Poland's Foreign Ministry said as it announced the cancelation on Sunday.

It said without elaborating that "the Israeli side made last-minute changes in the composition of the delegation suggesting that the talks would primarily focus on the issues related to property restitution."

The issue of former Jewish property in Poland is emerging as an emotional issue during campaigning ahead of European elections this month and national elections in the fall.

Poland was once home to 3.3 million Jews, but most were murdered by Nazi Germany during the Holocaust. Their properties were often looted by Germans and later nationalized by the communist regime. Some Jewish organizations have been seeking restitution of the properties.

On Saturday, thousands of nationalists marched in Warsaw to the US Embassy to protest US pressure on Poland to settle the outstanding matter of unpaid restitution.

Poland was occupied by Nazi Germany during World War II, suffering extensive material losses, and those protesting argue that it is not fair to ask Poland to compensate Jewish victims when Poland has never received adequate compensation from Germany.

Poland is the only European Union country that has not passed legislation regulating the compensation or restitution of property lost as a result of the war and communism. A string of governments have said that it cannot afford to do so.

Poland's right-wing government had been vowing to made demands on Germany and saying that it would not pay any compensation for Jewish claims.