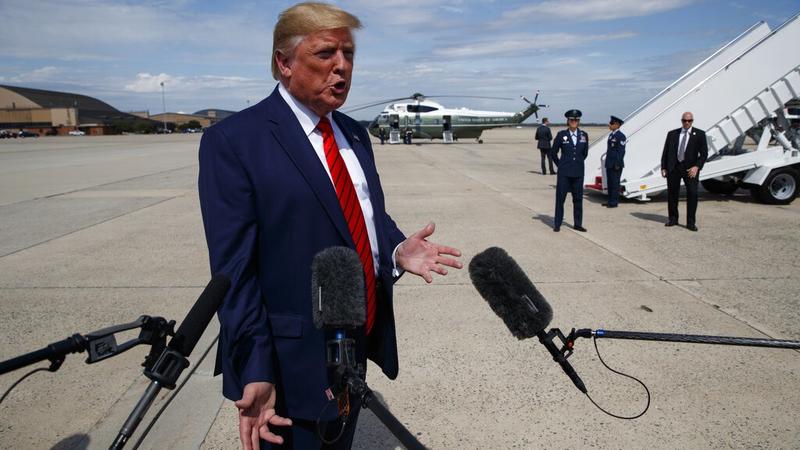 WASHINGTON - US President Donald Trump said Thursday the whistleblower complaint alleging his misconduct in a phone call with the Ukrainian president was "a disgrace" to the country, and "another witch hunt" against him.

Trump's remarks, made at Joint Base Andrews in Maryland upon the arrival of Air Force One, came after the Democrat-controlled House Intelligence Committee earlier in the day released a redacted version of the whistleblower complaint.

"It's a disgrace to our country," the president said. "It's another witch hunt."

Calling the issue "a terrible thing for our country," Trump said it "should never be allowed, what's happened to this President."

In the whistleblower complaint, which was filed on mid-August by an unidentified intelligence official, the official warned that Trump "is using the power of his office to solicit interference from a foreign country in the 2020 US election."

"They're going to lose the election; they know it. That's why they're doing it," Trump said, referring to the Democrats.

The whistleblower cited "White House officials who had direct knowledge of" a July 25 phone call between Trump and his Ukrainian counterpart, Volodymyr Zelensky, as saying Trump pressured Zelensky "to initiate or continue an investigation into the activities of Former Vice-President Joseph Bidenand his son, Hunter Biden."

"My call was perfect," Trump said. "The President, yesterday, of Ukraine said there was no pressure put on him whatsoever. None whatsoever. And he said it loud and clear for the press."

Schiff said during a hearing with Acting Director of National Intelligence Joseph Maguire on Thursday that the transcript of the Trump-Zelensky conversation was the "most graphic evidence yet that the President of the United States has betrayed his oath of office." The transcript was released by the White House on Wednesday.

Quoting the content of the whistleblower complaint -- where it said senior White House officials "had intervened to 'lock down' all records of the phone call" -- House Speaker Nancy Pelosi said Thursday that the Trump administration's dealing with the issue was a "coverup."

The Democratic congresswoman, who on Tuesday announced her chamber launched a formal impeachment inquiry into Trump, reiterated the necessity of the inquiry, while cautioning "no rush to judgment."

"There are some in our caucus who think let's just have an impeachment. No, we have to have an inquiry to further establish the facts," Pelosi said at her weekly news conference.

"But every day, the sadness grows because the disregard for our Constitution that the President has becomes more clear," she added.