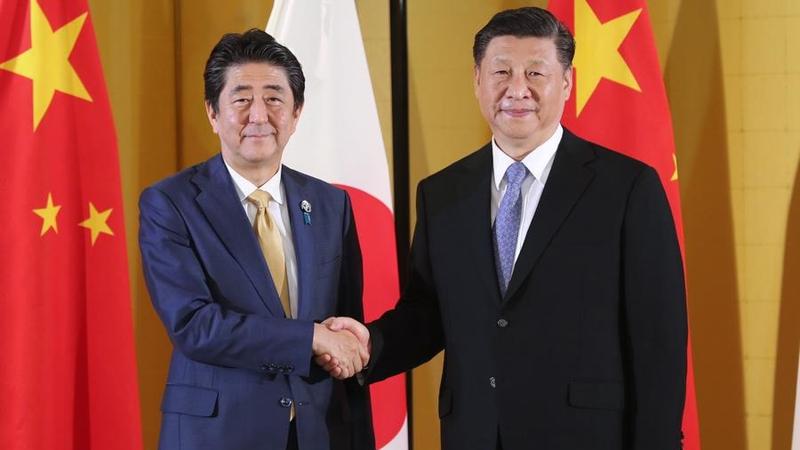 President Xi Jinping accepted in principle an invitation by Japanese Prime Minister Shinzo Abe to make a state visit to Japan in the spring, and they agreed at their meeting in Osaka on Thursday to maintain close communication and continue strengthening mutual political trust.

They agreed that both countries have entered a new era of development, and joint efforts are needed to build bilateral relations

Xi arrived in the Japanese city on Thursday afternoon for the G20 Summit, to be held from Friday to Saturday. He met with Abe in the evening and then attended a welcoming banquet hosted by the Japanese leader.

They agreed that both countries have entered a new era of development, and joint efforts are needed to build bilateral relations that fit the needs of the new era.

The two leaders agreed to deepen integration of the interests of the two countries and enhance cooperation in such areas as scientific innovation, intellectual property rights protection, trade, investment, finance, medicine, health, environmental protection and tourism.

Wu Jianghao, director-general of the Department of Asian Affairs of the Foreign Ministry, said the two leaders spoke positively of the good momentum and improvement in Sino-Japanese relations, and they agreed that matters of common interest and concern for the two countries are increasing.

The two leaders agreed to uphold the political consensus of being cooperative partners and not posing threats to each other, Wu said.

Japan said that the Belt and Road is a promising initiative that could connect regions, and China welcomed Japan's participation in building a high-quality Belt and Road, he said.

The two leaders stressed that both China and Japan are important contributors to the development of Asian civilization and the two sides should promote equal dialogue among different cultures, Wu said.

Wu said the two leaders agreed to enhance people-to-people exchanges between the two countries and promote the friendship of people from both nations.

The two leaders reaffirmed their commitment to upholding the path of peaceful development, and they agreed to further promote dialogue in diplomatic and security areas, Wu said.

The two leaders agreed to properly handle sensitive issues and manage disagreements in a constructive manner, he said, adding that the two sides agreed to make joint efforts to maintain peace and stability in the East China Sea.

The two leaders agreed that China and Japan, as important countries in Asia and major world economies, should jointly maintain multilateralism and the free trade system, Wu said.

During the G20 Summit, Xi will present China's views and positions on the world economy and global economic governance. On the sidelines, Xi is scheduled to attend the BRICS leaders' informal meeting, the China-Russia-India leaders' meeting and the China-Africa leaders' meeting, and attend several bilateral meetings.