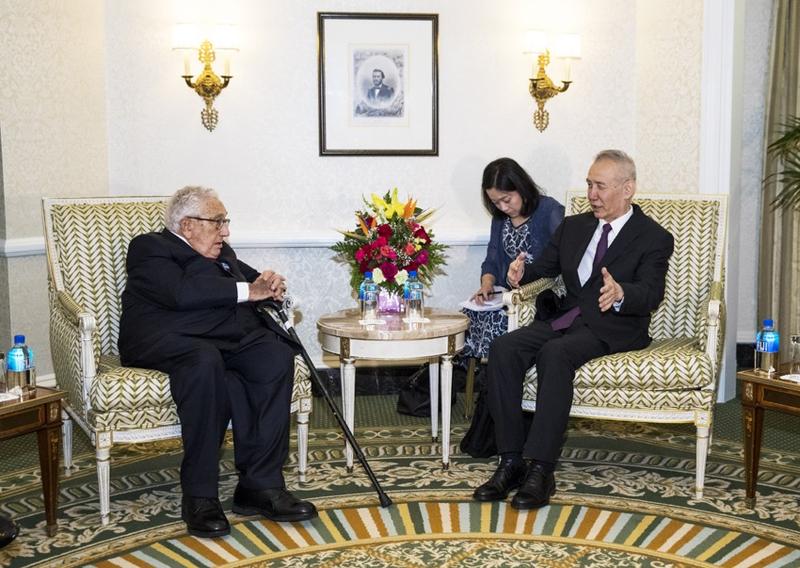 WASHINGTON – Chinese President Xi Jinping's special envoy and Vice-Premier Liu He on Wednesday met with former US Secretary of State Henry Kissinger and some key US lawmakers to discuss China-US ties.

Liu arrived in Washington on Tuesday afternoon for economic and trade consultations with the US side at the invitation of the US government.

Also a member of the Political Bureau of the Communist Party of China Central Committee and chief of the Chinese side of the China-US comprehensive economic dialogue, Liu leads a delegation whose members come from major economic sectors of the Chinese government.

The handling of the US-China relationship demands strategic perspective and foresight as it concerns global peace and prosperity, and is of utmost importance.

During his meeting with Kissinger, Liu congratulated the veteran diplomat on his upcoming 95th birthday, and hailed his long-time commitment to China-US friendship.

Guided by Xi and his US counterpart, Donald Trump, China-US ties have achieved important and positive progress, Liu said.

READ MORE: Vice-premier arrives in US for trade talks

He noted that his ongoing US visit aims to, according to the consensus of the two presidents, continue in-depth communication with the US side on bilateral economic and trade issues.

Liu said he will actively explore a proper settlement of the trade issues to secure a healthy development of the economic and trade ties between Beijing and Washington.

Kissinger said the handling of the US-China relationship demands strategic perspective and foresight as it concerns global peace and prosperity, and is of utmost importance.

In his meeting with key lawmakers of both houses of the US Congress, Liu said the two nations' commitment to a long-standing, healthy and stable bilateral relationship is in line with the fundamental interests of the two peoples and the shared expectations of the international community.

The two nations' shared interests far outweigh their differences, said Liu, adding that both countries will win if they work together, and lose if they are pitted against each other.

He added that China-US economic and trade ties are mutually beneficial in nature, thus the two sides need to view their trade issues in a comprehensive and objective manner, and properly deal with related problems based on mutual respect, equality and the win-win approach.

China attaches great importance to the role of the US Congress, and is ready to strengthen exchanges with the US legislature, Liu said.

The US lawmakers said that the United States is willing to maintain friendly relations with China and that the two nations should not fight a trade war despite having differences on some economic and trade issues.

They expressed their hopes that both sides can actively seek solutions that fit the interests of the two nations through consultations.