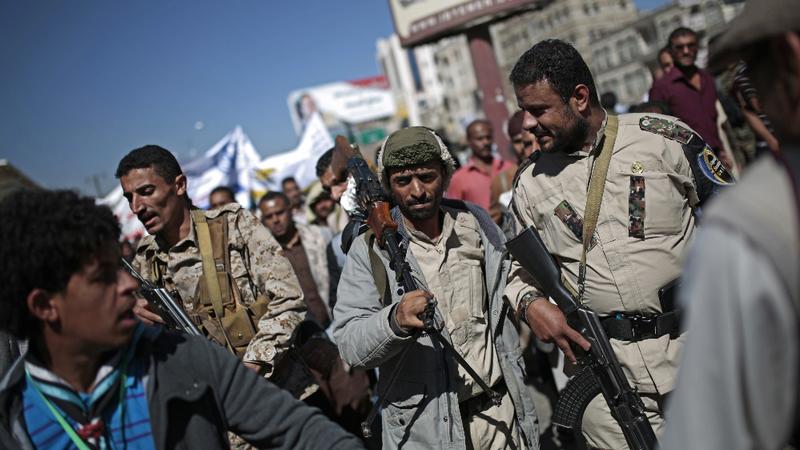 In this photo taken on Dec 10, 2018, Houthi fighters take part in a protest calling for the reopening of Sanaa airport to receive medical aid, in front of the UN offices in Sanaa, Yemen. (HANI MOHAMMED / AP)

ADEN — In 2018, Yemen experienced dramatic escalation of the internal military conflict, severe collapse of the country's national currency and an outbreak of acute diseases.

However, reviving the political process between the two warring sides through consultations supervised by the UN was seen as a glimmer of hope for the Yemeni people at the end of 2018.

The two-warring sides reached some substantive points of agreement regarding the humanitarian issue for the first time following years of devastating war that destroyed the country.

Sweden's peace talks were a development that nourished hopes and paved the way for a possible political solution to the nearly four-year civil war in 2019, after several setbacks in the course of negotiations.

Basheer Ahmed, an Aden-based youth activist, told Xinhua that declaring a cease-fire in Hodeidah was a good step that will set the stage for future negotiations between the two warring rivals to find a permanent solution to the country's conflict.

"The next negotiations might discuss the country's political crisis because it's time to go deeper into discussing the main causes of the current crisis and ending the conflict politically," said Ahmed.

"Sweden's deal was the only achievement made in 2018 that may pave the way for other deals between the two warring rivals during the upcoming negotiations," he said.

Other Yemeni citizens believe that there is no end of the country's lingering crisis, and 2019 will be another year full of despair, frustration and internal military conflicts.

"Nothing will be changed and the situation may worsen in 2019. More difficulties are coming," said Abd-Daym Hassan, an employee in the Health Department.

"Yemenis will experience another year of suffering because the warring factions have no real desire for ending the war," Hassan said.

Only the ordinary people are largely affected by the ongoing military conflict and take heavy burdens in their daily lives.

For Sadeq Ali, an Aden-based citizen, 2018 is a catastrophic year.

"Most of the families are burdened with debts because they received no salaries during 2018," Ali said.

Yemen is politically fragmented and it is not an easy task to create stability in the country, despite the numerous rounds of efforts made by the international community, the UN in particular.

Violence continued throughout the country during 2018, draining the lives of Yemenis, with numerous people joining the list of dead, wounded or disabled.

Bloody armed confrontations sparked between the two warring sides over the control of the country's Red Sea port city of Hodeidah and heavily exhausted the Yemeni people during 2018.

In June, forces loyal to the country's internationally-recognized government launched a vast offensive to capture the strategic port city of Hodeidah from the Iranian-backed Houthi rebels.

The military campaign against the Houthis triggered months of fighting that enabled the pro-government forces to make progress and recapture key neighborhoods inside Hodeidah after expelling the Houthis.

But the UAE and Yemen's government announced a pause in the military campaign against the Houthis in Hodeidah to give a chance to UN peace efforts.

The UN peace efforts succeeded in bringing together the delegations representing the two-warring sides to attend Sweden's talks from Dec 6 to 13, 2018.

UN Secretary-General Antonio Guterres, who joined in the final day of the Yemen peace talks, said that the two-warring sides agreed on partial cease-fire at the port of Hodeidah. Guterres hoped that this would lead to the opening of humanitarian corridors.

READ MORE: Children as young as 10 fight, kill and die in Yemen's war 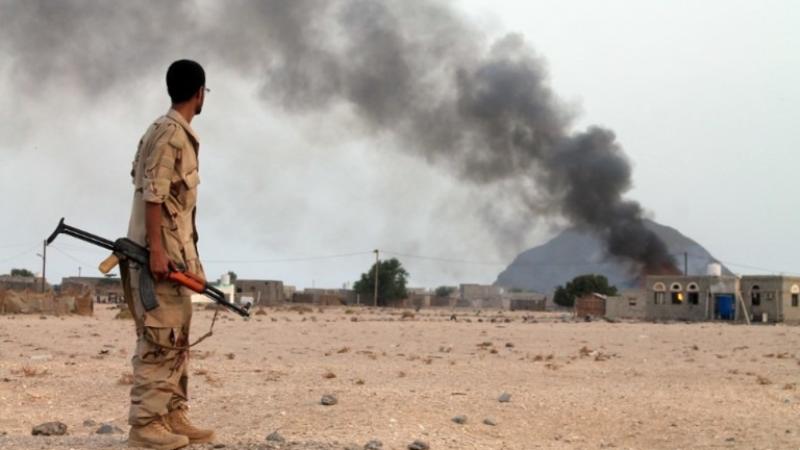 A Yemeni fighter from the Popular Resistance Committees looks towards smoke rising from a building after they reportedly attacks military vehicle belonging to Shi'ite Houthi rebels west of the southern embattled Yemeni city of Aden on July 12, 2015. (SALEH AL-OBEIDI / AFP)

The cease-fire deal demanded full withdrawal of all armed groups from Hodeidah and its strategic seaports with the presence of a UN-led monitoring team headed by the retired Dutch general Patrick Cammaert.

The conflict has caused what the UN calls the world's worst humanitarian crisis, with 14 million Yemenis now at the brink of mass starvation.

Yemen has been mired in a civil war since late 2014 when the Houthi rebels overtook Sanaa and ousted the government of President Abd-Rabbuh Mansour Hadi. A Saudi-led coalition has been fighting the Houthis since 2015.

The war has killed more than 10,000 people and created a serious humanitarian crisis.