The age of artificial intelligence: Cities and the AI edge 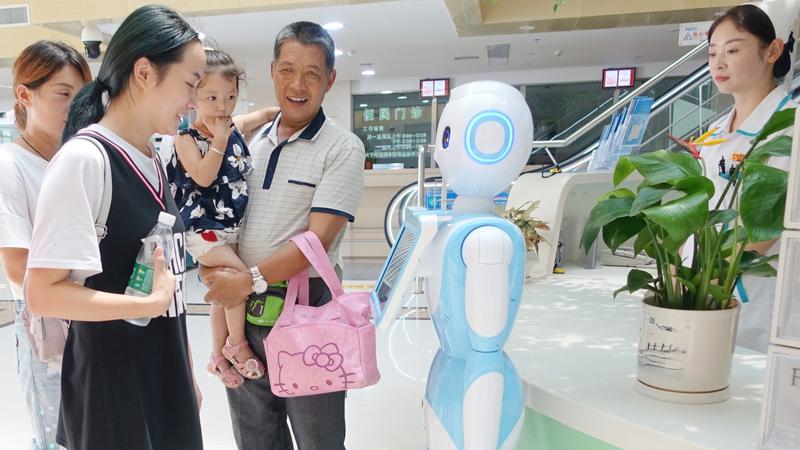 Visitors interact with a robot guide at Fuyang Women and Children Hospital in Fuyang, Anhui province, on Aug 2, 2018. (WANG BIAO / FOR CHINA DAILY)

SINGAPORE — In Padang, West Sumatra, San Francisco-based non-profit organization Rainforest Connection is mounting used cellphones on trees to detect sounds that originate from chainsaws or trucks belonging to illegal loggers. Rangers, villagers and law enforcement agencies are then alerted to the illegal activities and can take action.

In Singapore, DBS Bank is predicting when employees will quit, so management can intervene and retain staff.

There will be a lot more opportunities to do things differently and do more things than you can do today.

Jeff Dean, Head of AI at Google, on artifical intelligence

What unites the three cities in their cutting-edge exploits is a new frontier technology known as artificial intelligence (AI).

Tipped to power the fourth industrial revolution, AI is a technique that allows machines to learn from enormous sets of data.

In itself, the technique is not new. The first working program was written in 1951, allowing humans to play chess and checkers with the world's first commercially available computer - the Ferranti Mark 1 created by British firm Ferranti.

AI is now able to do a lot more, and at a quicker pace, allowing cities and the way people live and work in them to be shaped.

The Singapore government, for one, is testing the use of AI to ease traffic congestion, deter fraud in claims for government funding and detect potential drownings in public pools.

"It is the increasing power of computation that allows an enormous amount of data to be processed in milliseconds," said retired Israeli major-general Isaac Ben-Israel, who is in charge of developing his country's national AI strategy.

For instance, 200,000 hours of the sounds of the ocean can be analysed in hours to detect humpback whales and chart their migration patterns. It would take years to do the analysis without AI software powered by fast computers.

Professor Ben-Israel also sits on the board of Singapore's Agency for Science, Technology and Research (A*Star), and helps to chart Singapore's overall research and development direction.

Over the past five years, big American tech firms Google, Amazon and Apple as well as China tech giants Huawei and Alibaba have contributed to quantum leaps in computing power by developing their own AI chips to allow for faster and cheaper data processing for machine learning, much of which takes place on systems hosted on the Internet.

Machine learning is a key part of AI, allowing specific tasks to be done by way of inference in the absence of explicit instructions and computing rules.

As a result, AI researchers can rent online computing power for 10 hours for US$50 or less per computer to process data, cutting the need to own their own super machines.

Access to cheap computing resources and free open-source tools has allowed engineering students in Delhi, India, to develop an app to let people assess air quality in real-time, simply by snapping a picture with their mobile phones.

"It is an important competitive advantage as AI helps to improve air quality and public transport, which will make a city more liveable... These are in addition to traditional infrastructure like mobile networks and electricity," said Sherif Elsayed-Ali, director of partnerships at Canada-based software firm Element AI.

Jeff Dean, head of AI at Google, added: "There will be a lot more opportunities to do things differently and do more things than you can do today."

For instance, Bali-based Gringgo Indonesia Foundation is working with Google to develop an AI-enabled application to help human-waste collectors better identify recyclables by snapping a picture on their phones.

But as with all new technologies, there is some level of mistrust.

For example, in "passive data collection", people out in public are having their bodies and faces scanned without their consent by security cameras for law enforcement purposes. "If misused, then it will erode a lot of trust in such technologies," Elsayed-Ali said.

In China, home to the world's largest network of surveillance cameras and gait recognition technology for law enforcement, not many have raised concerns.

But San Francisco has earlier this year banned the use of facial scanning for administrative efficiencies or public safety, to prevent potential abuse, the city said.

Each city's level of tolerance and trust varies, an ongoing survey conducted by Switzerland-based business school the International Institute for Management Development (IMD) and the Singapore University of Technology and Design has found.

"In Chongqing and Bengaluru, people are 100 percent comfortable, but people in Boston and Amsterdam do not want their faces scanned. People in Singapore and Dubai have mixed feelings," said Bruno Lanvin, president of the Smart City Observatory at IMD.

The push for more privacy has led to a movement for federated machine learning, where AI machines are trained using millions of mobile devices, without extracting raw data from the devices.

Google's TensorFlow and Facebook's PyTorch are two of the world's most popular machine learning frameworks built to deploy federated machine learning. They power predictive spelling on virtual keyboards that can "learn" new words, and virtual assistants that can converse with humans.

Singapore's Senior Minister of State for Communications and Information and Transport Janil Puthucheary said that new technologies - whether they are chemical or biomedical engineering or aviation - bring with them risks as well as opportunities, and have subjected humanity to ethical binds before.

Janil, who is also minister-in-charge of GovTech, the agency behind the Singapore public sector's technology transformation, said people need to accept that there are profit motives as well as social responsibility.

He added: "AI is already here and we are already on this path. We need to have a little bit of faith in humanity that we can deliver on this."