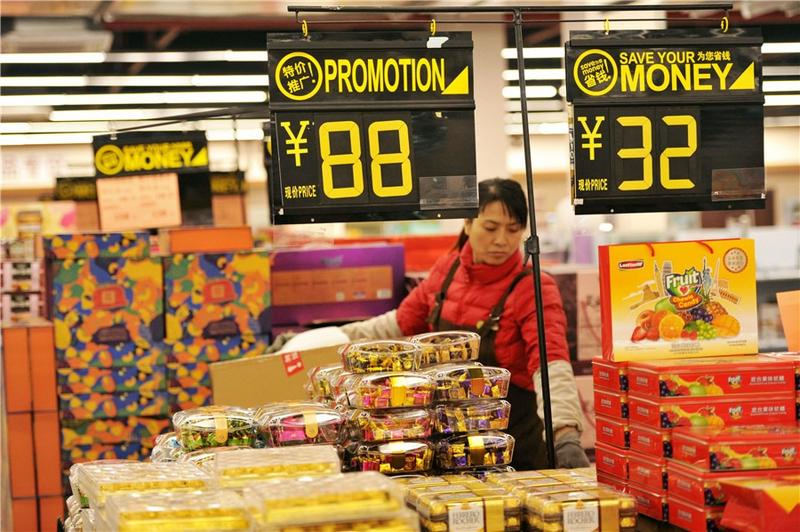 In this undated photo, a saleswoman arranges imported snacks at a duty-free store in Qingdao, Shandong province. (PHOTO / XINHUA)

China's massiveness and complexity mean that the term "Chinese consumer" is insufficient by default. If you are ever familiar with the "silo" system categorizing different Chinese cities, people's tastes and spending power may vary, from tier-one to tier-four, categorically.

But as more multifaceted sets of consumer segments are revealed, one cannot be more wrong than simply assuming that people in Shanghai－China's most affluent city by GDP－are naturally generous spenders than those in, say, inland Central China's Henan province.

While big city residents could have more disposable incomes in absolute terms, it is their peers in lower-tier cities and townships that are willing to spend a premium for items, from avocados to sparkling water

The truth is: The consumption locomotive has quietly shifted gear in the past few months. While big city residents could have more disposable incomes in absolute terms, it is their peers in lower-tier cities and townships that are willing to spend a premium for items, from avocados to sparkling water.

Welcome to China's consumption new norm, a trend featuring the rise of consumption power among smaller city residents, who are typically in their 20s to 30s, have received university education, and manage to get some level of Western exposure thanks to access to new technologies.

They now form the backbone powering Beijing's ambition to bolster consumption, facilitate the smooth transformation of economic engines, and maintain a sound pace of expansion.

A string of statistics has confirmed the telling tendencies. During February's Spring Festival, online shopping exhibited much stronger vibrancy in third and lower-tier cities across major platforms from Tmall to JD. Residents from smaller cities outperformed their cosmopolitan counterparts by the number of orders placed, the variety of products they chose and customer-per-spending for certain categories.

In the cosmetics segment, for instance, residents of smaller cities pumped 38 percent year-on-year of online spending on cosmetics last year, dwarfing just 16 percent recorded by their counterparts in major cities, according to consultancy Kantar Worldpanel.

People in this demographic aren't hesitant about becoming trendsetters: They have been fueling sales of avant-garde special-flavored mouth washes, customized electronic toothbrushes and liquid eye shadow.

Look further afield: travel agencies like Ctrip and Fliggy have noticed similar patterns. Outbound trips, a long-time rarity for township dwellers, have seen explosive growth in recent holiday peaks. Accompanying such an upward trend is the usage of mobile spending, where residents of smaller cities lead the pack, according to mobile wallet Alipay.

Therefore, China's consumer culture has by no means grounded to a halt, thanks to the group which, according to the National Bureau of Statistics, is comprised of 220 million people aged between 20 and 35. There seem to be several factors contributing to their emergence.

And the lower living costs have given rise to higher fertility rates in these regions. The upshot, according to Morgan Stanley's estimates, is that smaller cities could account for 76 percent of overall urban population growth by 2030. That spells huge spending power in the long run.

Also sparking consumption is the nation's enhanced infrastructure connectivity across cities, which cuts travel time on major routes by at least half, and could in turn encourage industrial relocation from big cities to smaller ones. Meanwhile residents of smaller cities also benefit from relatively lower housing costs, which can effectively unleash consumption potential on more discretionary items.

With no signs of abatement, consumption is set to continue upgrading in terms of scale and quality, and this is good news for both the country to keep the economy on track and businesses seeking to cash in on the world's largest consumer market.

I am no expert on giving investment advice, but for global companies, it would not hurt to watch out for opportunities in providing quality food and beverages, entertainment offerings, and outbound travel featuring immersive local experiences.