China poised to be 5G powerhouse 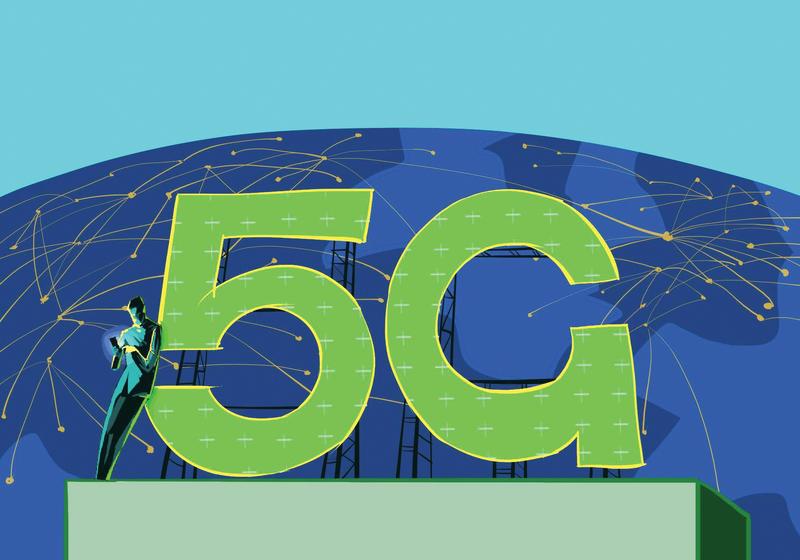 The clock is ticking. In two years, we are supposed to enjoy full 5G, the next generation of mobile communication technology.

The technology has been evolving rapidly. In the 1980s and 1990s, in the 1G era, people were excited about talking on big cellphones, with poor battery life and bad voice quality; between the 1990s and 2000, 2G allowed text messages; from 2000 to 2010, smartphones emerged with 3G, and users were able to have video calls and fast communication; from 2010 on, 4G enabled mobile multimedia, good voice quality and better battery usage.

5G, scheduled to be fully accessible in 2020, will bring the next wave of digital innovation.

It will dramatically increase the speed of the mobile internet, bringing brand new experiences to audiences in terms of mobile connection, entertainment and multimedia. The supercharged 5G network will enable users to download a movie in a few seconds, or to stream live events, video making up the majority of the world’s internet traffic.

Of course, 5G is about far more than providing a fast mobile network and a perfect entertainment experience. The genuine and more profound revolution brought about by 5G is that this new communication standard will enable mass deployment of the internet of things, connecting billions of intelligent devices — refrigerators, cars, garage doors and central heating among them. Smart homes, smart cities and smart farming will use 5G networks for connectivity and monitoring of applications.

The 5G network is capable of latency of less than a millisecond, laying the basis for new services requiring a minimal delay in electronic transmission, such as driverless vehicles or remote surgery making use of augmented reality.

Quick transmission of data is key to the further digitization of the manufacturing industry. 5G is particularly required for the modernization of the logistics and transportation industries.

In mid-June, the 3rd Generation Partnership Project, or 3GPP, a body that governs global cellular standards, approved the completion of the standalone Release 15 of 5G specifications, an essential step to standardize 5G following the release of 5G New Radio specifications for non-standalone operation last year.

The move marked a milestone toward 5G commercialization that enables relevant parties, operators, telecom equipment suppliers and device makers to work for a standalone 5G network.

But the work is only half done. The 5G standard will not be completed until the end of 2019, when Release 16 of 5G specifications is set to be released. Then the world can embark on the true 5G journey.

Countries are vying for leadership in the 5G race as the new technology is essential for growth. 5G will bring huge benefits for industries such as automobiles, healthcare, transportation, agriculture and utilities. The World Bank calculates that with “a 10 percent increase in high-speed internet connections, economic growth increases by 1.3 percent”.

China has been viewed as a strong competitor in 5G and is expected to become a leader in the global 5G race.

China is the country most prepared to launch 5G. South Korea is second, while the US ranks third, according to a report released in April 2018 by CTIA, a trade association for the US wireless industry.

Ernst & Young, a provider in tax, transactions and advisory services, issued a report in June titled China Is Poised to Win the 5G Race, saying that China has the edge in the race to roll out 5G.

Why will China win the competition? Here are some possible reasons:

First, 5G deployment in China has strong top-down support from the government.

China has been determined to win the 5G race, making it a top priority on the national agenda. In 2013, China’s Made in China 2025 strategy said the country should comprehensively break through in 5G technology. In the latest 13th Five-Year Plan (2016-20), Beijing proposed actively promoting the development of 5G and launching it in 2020.

China is no longer a follower in 5G. On the contrary, it is a main contributor to 5G standards. By March, China occupied 32 percent of the world’s 5G standard contribution, submitting more than 8,700 related documents to the 3GPP, and it has led about 40 percent of the 5G standardization research items in 3GPP. The nation has actively carried out 5G cooperation with the US, Japan, South Korea and Europe.

With support from the authorities, China started the third phase of 5G technology research and development (R&D) tests at the end of last year, ahead of schedule, aiming to get pre-commercial 5G products ready.

The country already has the world’s largest 4G market network, with the total number of Chinese 4G network users having reached 1.08 billion by the end of April, according to the Ministry of Industry and Information Technology.

Surveys found that China is poised to become the world’s largest 5G market by 2025, accounting for 430 million 5G connections, or one-third of the global total.

Another report released by Ernst & Young estimated that the number of 5G users in China will reach 576 million by 2025, or over 40 percent of global consumption.

Meanwhile, Chinese customers are well adapted to digital culture, which forms a good basis for the future rollout of 5G. The promising Chinese market will play an essential role in boosting full commercialization of 5G.

Last but not least, Chinese industry’s massive input will fuel the country’s success in 5G.

China’s telecommunications trio of China Mobile, China Telecom and China Unicom, along with telecom giants such as Huawei, have spared no effort in 5G trials, innovation and international cooperation, securing China’s leading role in the development race.

The China Academy of Information and Communications Technology, the research arm of the Ministry of Industry and Information Technology, predicts that the combined 5G expenditure of China Mobile, China Unicom and China Telecom will hit a peak of 313.3 billion yuan (US$45.5 billion) in 2023.

China Mobile, the world’s largest mobile operator, will conduct external field tests and set up more than 100 5G base stations each in Hangzhou, Shanghai, Guangzhou, Suzhou and Wuhan. The service operator will also conduct 5G network application demonstrations in 12 cities, including Beijing, Chengdu and Shenzhen.

In 2009, Huawei invested at least US$600 million in researching 5G products. It has built 11 5G research centers around the world. This year, the company plans to invest US$5 billion in R&D for 5G and launch a full range of commercial 5G equipment.

In April, Huawei obtained the world’s first CE-type examination certificate for 5G products. Its 5G products have won official approval for commercial use in Europe.

China lagged behind other countries in issuing 4G and 3G licenses. However, with joint efforts by the Chinese government, market and industry, it is widely believed that pain will lead to gain: China will be a new powerhouse in the 5G era.

The author, president of ChinaEU, contributed this article exclusively to China Watch. The views do not necessarily reflect those of China Daily.