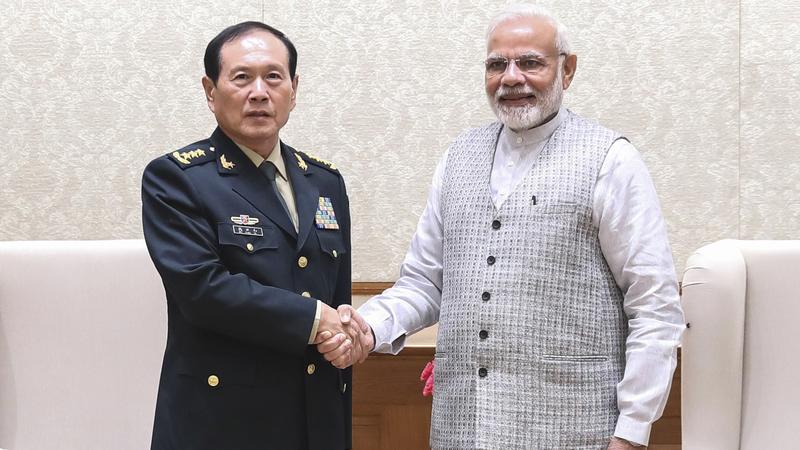 China and India will strengthen cooperation between their militaries and maintain peace along their shared border, the two sides pledged during a meeting in New Delhi on Tuesday between State Councilor and Defense Minister Wei Fenghe and Indian Prime Minister Narendra Modi.

The two countries should also further enhance exchanges and cooperation between their militaries and work together to maintain stability along their long shared border, Modi said

Wei, who is on a four-day visit to India, said that under the guidance of President Xi Jinping and Modi, friendly coexistence and win-win cooperation have come to characterize relations between the two countries as well as between their militaries.

The visit will help further implement the important consensus the two countries' leaders have reached, deepen military and security exchanges and cooperation, and strengthen the building of mutual trust, Wei said.

It will also help the two countries' militaries promote their ties and maintain peace in border regions, Wei said.

Modi said India and China share vast common interests and should support each other, conduct win-win cooperation and jointly plan for the future.

The two countries should also further enhance exchanges and cooperation between their militaries and work together to maintain stability along their long shared border, Modi said.

Wei is also scheduled to meet with Indian Defense Minister Nirmala Sitharaman during the visit.

This year has seen frequent interactions between the leaders of China and India.

Xi and Modi held an informal meeting in Wuhan, Hubei province in April－a meeting Xi said he hoped would begin a new chapter in bilateral ties.

They met again in June on the sidelines of the Shanghai Cooperation Organization Summit in Qingdao, Shandong province.

Less than two months later, they held bilateral talks while attending the BRICS summit in Johannesburg.

Lan Jianxue, a researcher of South Asian studies at the China Institute of International Studies, said such frequent high-level exchanges show that bilateral ties are improving.

Both countries believe they should seek common ground while properly settling their differences, he said.

Lan added that strengthened cooperation and mutual trust between their militaries will help prevent conflicts in the border areas, thus further contributing to the development of bilateral ties.