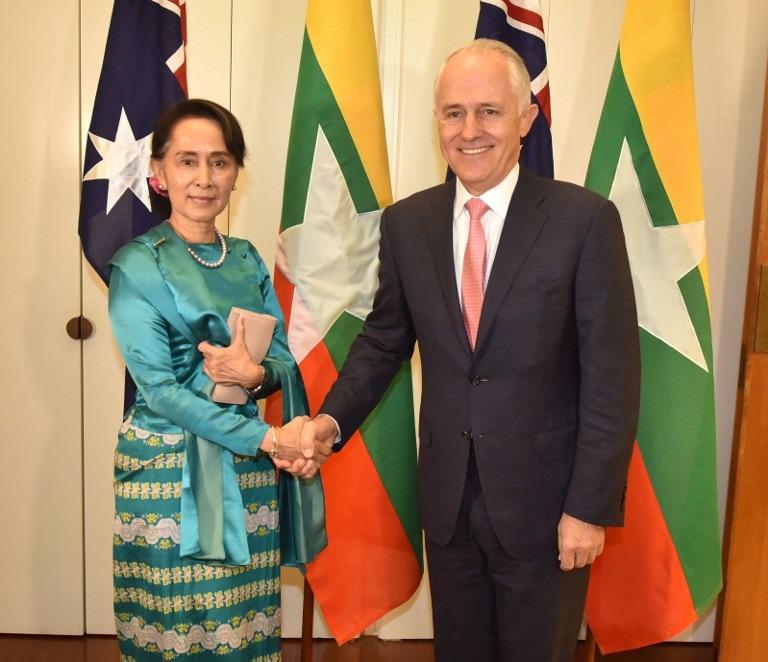 CANBERRA — Myanmar leader Aung San Suu Kyi was feted in Australia on Monday with a military honor guard and 19-gun salute, as part of a state visit that has provoked protests over her response to her country's violent campaign against Rohingya Muslims.

Suu Kyi arrived in Sydney over the weekend for a summit of Southeast Asian leaders and her state visit officially began on Monday as she was welcomed to the Parliament House in Canberra. Her visit comes as she faces international criticism over what has become Asia's worst refugee crisis in decades.

ALSO READ: Myanmar to hold peace summit in late April or early May

Australian Prime Minister Malcolm Turnbull said on Sunday that Suu Kyi spoke at length about her country's troubled western state of Rakhine, and sought humanitarian help from her fellow members of ASEAN and Australia to deal with the crisis.

Daw Aung San Suu Kyi addressed the matter comprehensively at some considerable length herself... She seeks support from ASEAN and other nations to provide help

"Daw Aung San Suu Kyi addressed the matter comprehensively at some considerable length herself... She seeks support from ASEAN and other nations to provide help from a humanitarian and capacity-building point of view," Prime Minister Malcolm Turnbull told reporters at the end of a summit, using a Burmese honorific.

Turnbull did not tell reporters whether Suu Kyi gave details of what support she was seeking or whether she spoke specifically about violence against the Rohingya, however ASEAN's Coordinating Centre for Humanitarian Assistance has been providing some aid since October.

The UN independent investigator on human rights in Myanmar, Yanghee Lee, said in Geneva this month she saw growing evidence to suspect genocide had been committed.

Myanmar denies the charges and has asked for "clear evidence" of abuses by security forces.

Since coming to power in 2016, Suu Kyi - who won the 1991 Nobel Peace Prize for her struggle for democracy - has failed to condemn the violence against the Rohingya.

Australia's Attorney-General on Saturday rejected a private bid by activist lawyers to have Suu Kyi face charges for crimes against humanity, saying she has diplomatic immunity.

Human rights groups have criticized Australia for maintaining its limited military engagement with Myanmar. Australia provides English-language lessons and training courses to Myanmar officers to "promote professionalism and adherence to international laws," according to the defense department.

But Australia maintains a long-standing arms embargo with Myanmar.

Suu Kyi had been scheduled to give a speech and answer questions at a foreign policy think-tank event in Sydney on Tuesday but cancelled because she was not feeling well, event organisers said, without giving more details.