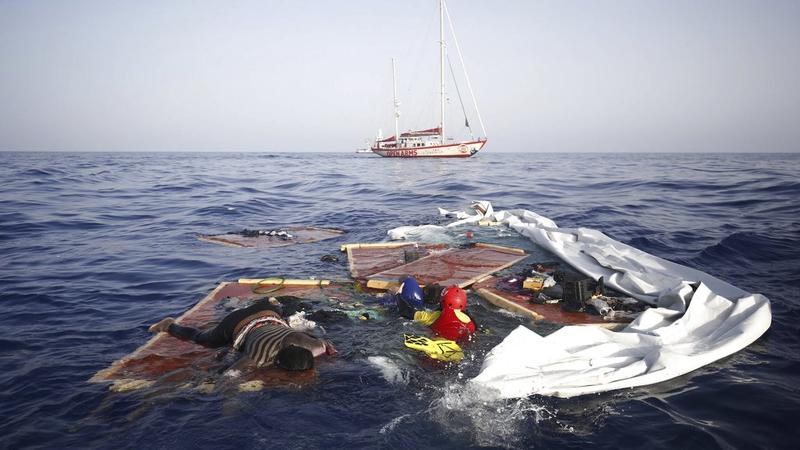 Rescue workers from the Proactiva Open Arms Spanish NGO retrieve the bodies of an adult and a child amid the drifting remains of a destroyed migrant boat off the Libyan coast, on July 17, 2018. (PROACTIVA OPEN ARMS VIA AP)

MADRID — A migrant aid group has accused Libya's coast guard of abandoning three people in the Mediterranean Sea, including a woman and a toddler who died, after intercepting 160 Europe-bound migrants near the shores of the North African nation.

All disasters happening in the sea are caused by human traffickers who are only interested in profit and the presence of such irresponsible, non-governmental groups in the region

Proactiva Open Arms, a Spanish rescue group, said it found one woman alive Tuesday and another dead, along with the body of a toddler, amid the drifting remains of a destroyed migrant boat some 80 nautical miles from the Libyan coast.

The organization posted images and videos of the wreckage and the dead bodies on social media, accusing both a merchant ship sailing in international waters and Libya's coast guard for failing to help the three migrants.

"All disasters happening in the sea are caused by human traffickers who are only interested in profit and the presence of such irresponsible, non-governmental groups in the region," coast guard spokesman Ayoub Gassim said in a statement.

The head of Proactiva Open Arms, Oscar Camps, on Tuesday blamed the Italian government's cooperation with Libyan authorities for the death of the woman and the toddler.

"This is the direct consequence of contracting armed militias to make the rest of Europe believe that Libya is a state, a government and a safe country," Camps said in a video posted on Twitter.

Camps said the two women and the toddler had refused to board the Libyan vessels with the rest of the intercepted migrants and were abandoned in the sea after the Libyan coast guard destroyed the migrants' boat.

In a later statement about Tuesday's deaths, Camps said, "The blame for this crime falls on Matteo Salvini's policies," a reference to Italy's hard-line interior minister.

Some 1,443 people are dead or missing in the dangerous Mediterranean Sea route up to July 15 this year, according to the UN migration agency.

Libya has emerged as a major transit point to Europe for those fleeing poverty and civil war in Africa and the Middle East, as traffickers exploit the lawlessness and chaos that has engulfed the country since an uprising in 2011.

Italy's new populist government has vowed to halt the influx of migrants across the Mediterranean and has given aid to Libyan authorities to do that. Human rights activists have sharply criticized that, saying migrants being returned to Libya are at risk of facing beatings, abuse, rape and slavery.

Gassim, the coast guard spokesman, said earlier Tuesday that a boat carrying 158 passengers including 34 women and nine children had been stopped Monday off the coast of the western town of Khoms. He said the migrants were given humanitarian and medical aid and were taken to a refugee camp in Khoms.

He said the coast guard has rescued more than 80,000 migrants who departed Libya for Europe in recent years.

Both Italy and Malta have blocked aid groups from operating rescue boats in the Mediterranean, either by refusing them entry to their ports or by impounding their vessels and putting their crews under investigation. 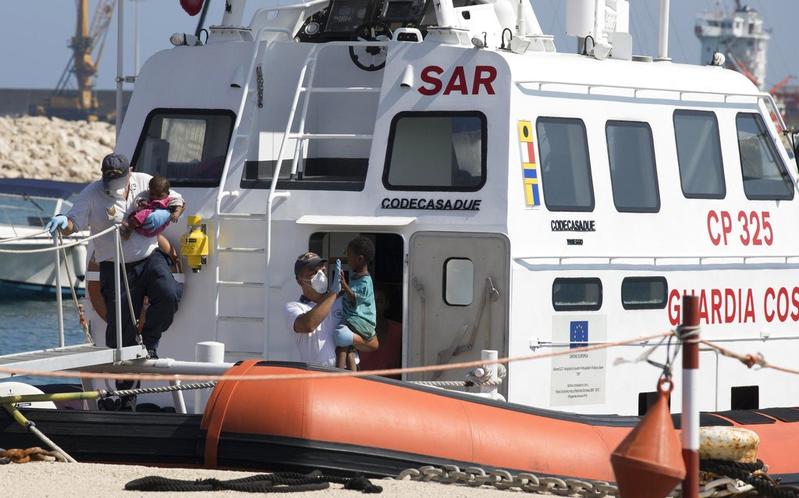 Children disembark from an Italian Coast Guard ship in the port of Pozzallo, Southern Italy, July 15, 2018. Another day's worth of food and beverages was sent Sunday to a pair of military ships off Sicily as Italy waited for more European nations to pledge to take a share of the hundreds of migrants on board before allowing the asylum-seekers to step off onto Italian soil. (FRANCESCO RUTA / ANSA VIA AP)

But Salvini on Tuesday rejected any criticism of his country's stance on migration.

"Lies and insults from some foreign NGO confirm that we are right: Reducing the departures and disembarkations means reducing deaths and reducing the earnings of those who speculate on clandestine migration," Salvini said in a Facebook post.

At the inauguration of a police station in Fermo, a town in central Italy, Salvini said, "I challenge anyone to find a tweet where I ask for a human being to be left to drown at sea."

The recent political turmoil in Europe over migration comes even as the overall number of migrants arriving has dropped more than half from last year.

The International Organization for Migration reported Tuesday that the number of migrants and refugees reaching Spain by sea this year has overtaken those who have arrived in Italy. It said Spain saw 18,016 migrants come in up to July 15, while 17,827 people landed in Italy during the same period.

Aid groups have reported a rise in the number of sea crossings to Spain and Greece compared to the previous year, while migrant arrivals in Italy are down almost 80 percent from 2017.