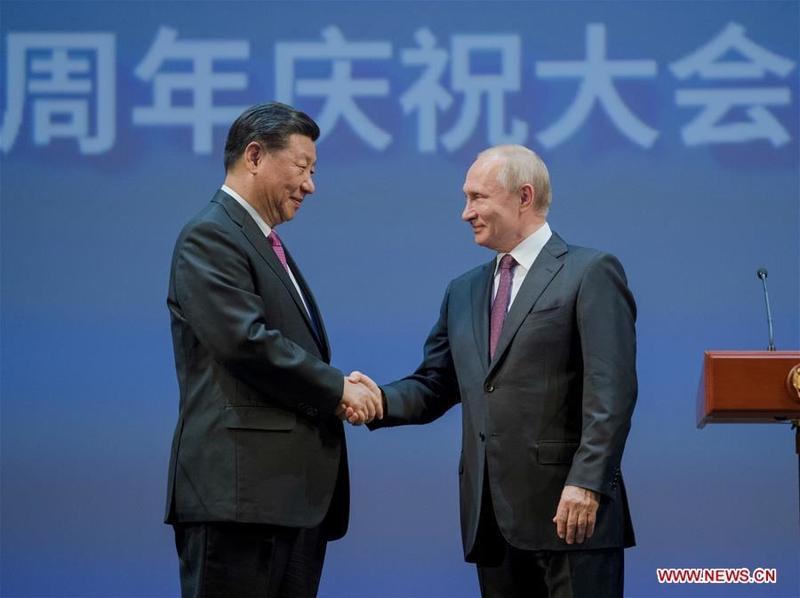 Chinese President Xi Jinping (left) and his Russian counterpart Vladimir Putin attend a gathering marking the 70th anniversary of the establishment of the China-Russia diplomatic relations at the Bolshoi Theater of Russia in Moscow June 5, 2019. (LI XUEREN / XINHUA)

MOSCOW - Chinese President Xi Jinping and his Russian counterpart, Vladimir Putin, attended on Wednesday a gathering marking the 70th anniversary of the establishment of diplomatic relations between the two countries.

The gathering was held after Xi and Putin signed a joint statement to upgrade bilateral relations to a comprehensive strategic partnership of coordination for a new era.

Addressing the audience at the Bolshoi Theatre of Russia, Putin said the bilateral relationship has gone through an extraordinary course of development over the past seven decades.

With mutual support and assistance, the two countries have promoted their relations to an unprecedentedly high level, he said.

The past 70 years have fully proved that China and Russia are good neighbors and true partners, as they were before and will be in the future, Xi said

China has been Russia's largest trading partner, and fruitful results have been achieved in cooperation in energy, aviation, science and technology, and other areas, Putin said.

Russia and China jointly support multi-polarization of the world, safeguard international law as well as the purposes and principles of the UN Charter, and promote the formation of a new international order based on the principles of equality, mutual benefit and win-win cooperation, he said.

In his speech at the gathering, Xi said the two countries are embracing yet another historic moment in bilateral relations.

The past 70 years have fully proved that China and Russia are good neighbors and true partners, as they were before and will be in the future, Xi said.

The two countries will always cherish their unbreakable bond forged with lives and blood during the Soviet Union's Great Patriotic War and the Chinese People's War of Resistance against Japanese Aggression, in which the army and people of the two countries fought side by side against fascism, Xi said.

Just one day after the founding of the People's Republic of China, the Soviet Union recognized the country and set up diplomatic relations with it, Xi recalled, noting that many Soviet experts helped new China lay its industrial foundation.

In the 21st century, China and Russia signed the landmark Treaty of Good-neighborliness and Friendly Cooperation and lifted their ties to a comprehensive strategic partnership of coordination, setting a paradigm for building a new type of international relations and a community with a shared future for humanity, he added.

Having withstood the test of changing global and domestic landscapes over the past seven decades, China-Russia ties are increasingly mature, stable and resilient, Xi said. 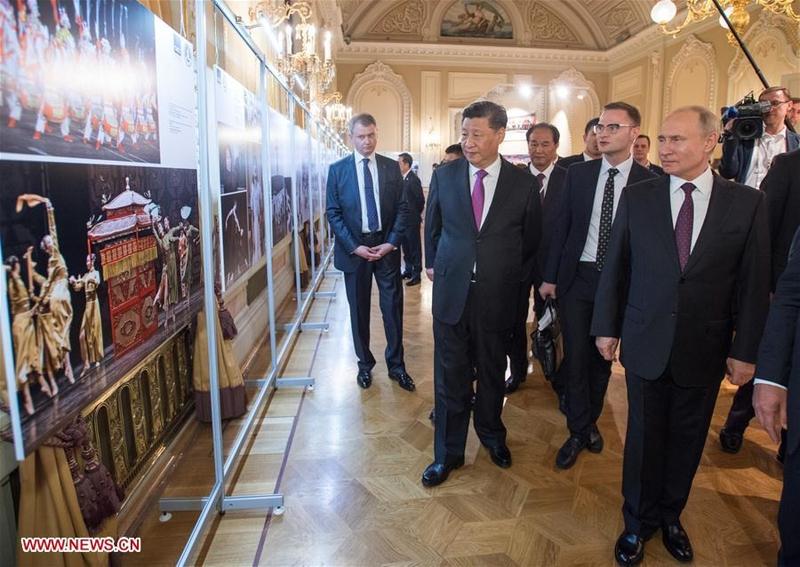 The China-Russia relationship in the new era should be built on mutual trust and strong strategic support, Xi said, adding that they should better support each other on issues concerning their respective core interests and keep a firm hand on the strategic direction of bilateral relations.

The two countries should deepen the convergence of their interests, continue synergizing the Belt and Road Initiative and the Eurasian Economic Union, and create a new pattern of mutually beneficial cooperation, Xi said.

People-to-people exchanges should be enhanced so that the traditional friendship between the two peoples can be carried on, he said.

Xi also called for joint efforts to safeguard world peace, promote multi-polarization of the world and democratization of international relations, and build a more prosperous, stable and fair world.

At the gathering, the two heads of state watched a short video on people-to-people exchanges as well as a show presented by Chinese and Russian artists.

About 1,600 people from all walks of life from China and Russia attended the gathering.

Before the event, the two heads of state toured a photo exhibition marking the 70th anniversary of the establishment of their countries' diplomatic relations.