Fight between driver and passenger behind bus crash 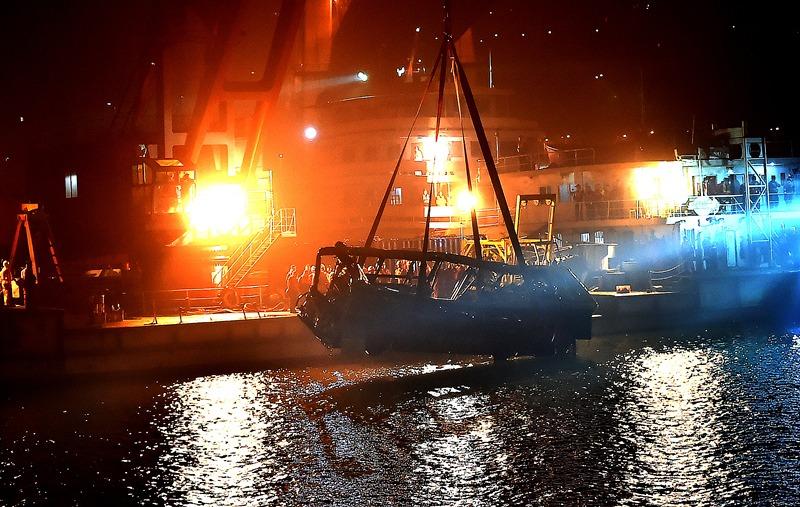 The wreckage of a bus that plunged into the Yangtze River on Sunday is lifted out of the water in Chongqing's Wanzhou district around 11:30 pm on Wednesday. (ZOU YI / CHINA DAILY)

A fight between the bus driver and an angry passenger caused the Chongqing bus to plunge into Yangtze River on Sunday, which left 13 people dead and 2 missing, said Chongqing police said on Friday morning.

During the fight, Ran lost control of the bus and the vehicle broke through a guardrail and plunged into the river

Based on the black-box recording device from the bus and other evidence, a female passenger surnamed Liu, 48, missed her stop and asked the driver surnamed Ran, 43, to stop immediately. After the driver refused to stop, Liu hit the driver’s head with her cell phone. During the fight, Ran lost control of the bus and the vehicle broke through a guardrail and plunged into the river with an estimated 15 passengers on board in Wanzhou, Chongqing.

The bus was lifted out of water Wednesday night.

Earlier, the black-box recording device from the bus was found and handed over to local public security bureau.

The bus was located 71 meters below the river's surface.

A salvage team has found the bodies of 13 people and confirmed their identities after their bus plunged into the Yangtze River on Sunday morning in Chongqing.

The bus was lifted out of the water at 11:28 pm on Wednesday night.

Two people are still missing and the search is continuing. The bus had an estimated 15 passengers on board.

The vehicle swerved suddenly onto the wrong side of the road on the Second Yangtze River Bridge in the city's Wanzhou district, striking an oncoming sedan before breaking through a guardrail more than 50 meters above the water.

The black-box recording device from the bus was found on Wednesday and handed over to the local public security bureau. The cause of the crash is still under investigation.

According to the Ministry of Emergency Management, the salvage work was especially difficult because of the small size of the bus, the depth of the water, limited visibility and shifting currents that impeded divers.

The bus came to rest 71 meters below the river's surface. All the windows of the bus were broken out, and it rested with its nose down at a 30-degree angle several meters from the face of an underwater cliff.

More than 70 rescue boats came to the scene, including three floating cranes with a total capacity of 125 metric tons. Eighteen professional divers are carrying out salvage operations, with another 20 divers serving as backups.