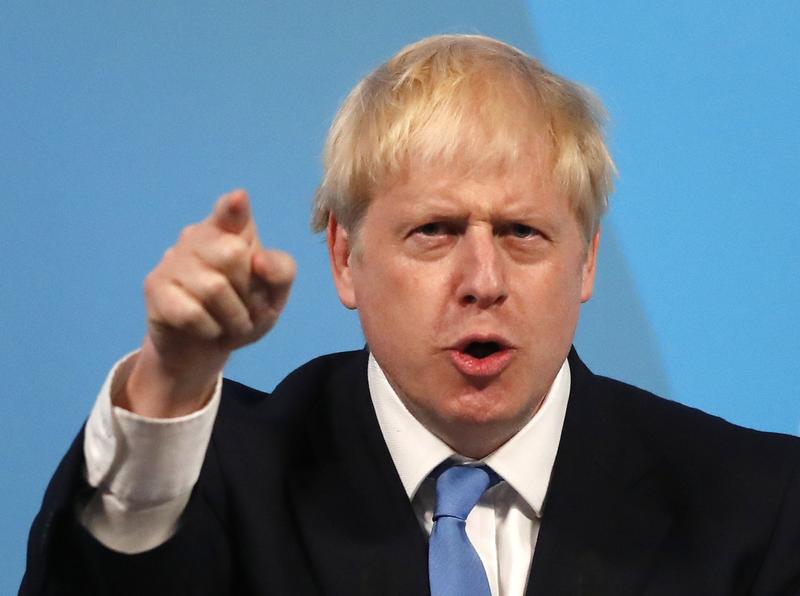 LONDON — Boris Johnson, Britain's blustering Brexit campaigner, was chosen as the UK's next prime minister on Tuesday, with a resounding mandate from the Conservative Party but conflicting demands from a politically divided country.

Johnson is set to become prime minister on Wednesday after winning an election to lead the governing Conservatives. He will have just over three months to make good on his promise to lead the UK out of the European Union by Oct 31.

Famed for his bravado, quips in Latin and blond mop of hair , Johnson easily defeated Conservative rival Jeremy Hunt, winning two-thirds of the votes of about 160,000 party members across the UK He will become prime minister once Queen Elizabeth II formally asks him to form a government, replacing Theresa May.

The embattled May announced her resignation last month after Parliament repeatedly rejected the withdrawal agreement she struck with the 28-nation bloc, leaving Britain stranded in Brexit limbo. The UK's departure from the EU was delayed from its long scheduled exit in March.

Johnson radiated optimism in a brief victory speech to hundreds of party members and lawmakers, pledging to "deliver Brexit, unite the country and defeat Jeremy Corbyn," leader of the opposition Labour Party.

In a sign he hopes to move beyond the largely white, male and affluent Conservative Party members who chose him as their leader, Johnson's office said he will put together a "Cabinet for modern Britain," with a record number of ethnic-minority lawmakers.

Hunt, a stolid politician compared to the flamboyant Johnson , said he was sure his rival would "do a great job."

"He's got optimism, enthusiasm, he puts a smile on people's face and he has total, unshakable confidence in our amazing country," said Hunt, who is likely to be removed as foreign secretary by the new prime minister.

Johnson wooed Conservatives by promising to succeed where May had failed and lead the UK out of the EU — with or without a divorce deal.

Johnson insists he can get the EU to renegotiate, something the bloc insists it won't do. If not, he says Britain must leave the EU by the Oct 31 deadline, "come what may."

The EU is adamant that the deal with May will stand, saying Britain has to take it or leave it.

Michel Barnier, the bloc's chief Brexit negotiator, said he looked forward "to working constructively" with the new Conservative leader "to facilitate the ratification of the Withdrawal Agreement."

Economists warn that a no-deal Brexit would disrupt trade and plunge the UK into recession . Fears that Britain is inching closer to crashing out of the bloc weighed on the pound once again Tuesday. The currency was down another 0.3 percent at $1.2450, nearly a two-year low.

Carolyn Fairbairn, director of the Confederation of British Industry, said businesses needed a withdrawal agreement with the EU to restore confidence that has been badly shaken by uncertainty about the terms of Brexit.

"On Brexit, the new prime minister must not underestimate the benefits of a good deal," she said.

Johnson faces a host of other challenges, from dealing with Iran's seizure of a British-flagged oil tanker to forging a relationship with US President Donald Trump, but Brexit is his overriding problem.

Trump was scathing about May's inability to achieve a Brexit deal and has said Johnson will do a better job.

On Tuesday he said Johnson "is going to do a good job" and "will get it done."

"We have a really good man is going to be prime minister of the UK now, Boris Johnson," Trump told a youth conference. "Good man. He's tough and he's smart. They say 'Britain Trump,' they call him Britain Trump, and people say that's a good thing."

More than three years after Britain narrowly voted to leave the EU, the country remains divided over whether to leave, and on what terms.

Johnson won the leadership contest by persuading Conservative members, who are strongly pro-Brexit, that Britain will leave the bloc "do or die."

Opponents say Johnson is reckless on Brexit and unrepentant about offensive and racist comments, such as calling Papua New Guineans cannibals and comparing Muslim women who wear face-covering veils to "letter boxes."

Opposition Liberal Democrat lawmaker Chuka Umunna tweeted: "I cannot think of a Tory leadership candidate more unfit to become the Prime Minister of this country than Boris Johnson," adding that his election was "a dark and depressing time for the UK"

Tony Travers, professor of government at the London School of Economics, said Johnson might moderate his Brexit stance now that he has secured the premiership.

"I would expect once he's in government to begin to nuance his position somewhat, because he'll now be appealing to a different set of voters: that's the UK electorate as a whole, not just the Conservative members, who are much more pro-Brexit."

The first clues to Johnson's plans are likely to come when he begins appointing his Cabinet on Wednesday and Thursday.

British lawmakers are due to start a six-week summer break on Friday. When they return in September, Johnson looks set for a fight with Parliament, where most members oppose leaving the EU without a deal, and where the Conservative Party lacks an overall majority.

Several government ministers have already announced they will quit so they can resist any push for a no-deal Brexit. 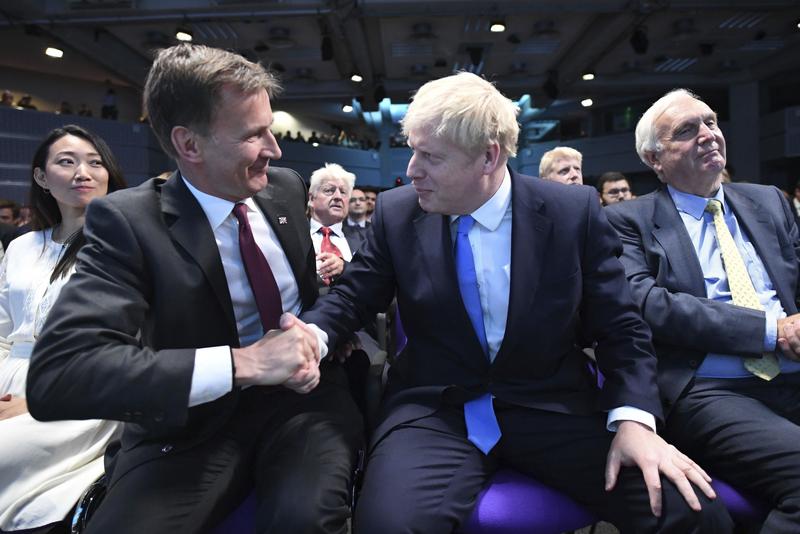 Jeremy Hunt, left, congratulates Boris Johnson after the announcement of the result in the ballot for the new Conservative party leader, in London, July 23, 2019. (STEFAN ROUSSEAU / POOL / AP)

"We'll have to see what Boris can muster," said Conservative lawmaker Margot James, who resigned last week as digital minister. "The default position is leaving without a deal, and there is a significant majority in Parliament who will work very hard to be sure that doesn't happen. And I will be among that number."

Outside the London conference center where the Conservative result was announced, pro-Brexit and pro-EU demonstrators waved rival Union Jacks and EU flags — and both sides had their doubts about Johnson.

"In the referendum, we were told that our vote would be honored, and (politicians) have spent three years trying to thwart Brexit," said retiree Sally Wright, who was not confident Johnson would deliver where others had failed.

"I think Boris Johnson is a person who will always say whatever gives him better career choices," she said. "He tells you what you want to hear."