By Chen Weihua in Beijing,Ren Qi in Moscow and Zhao Huanxin in Washington 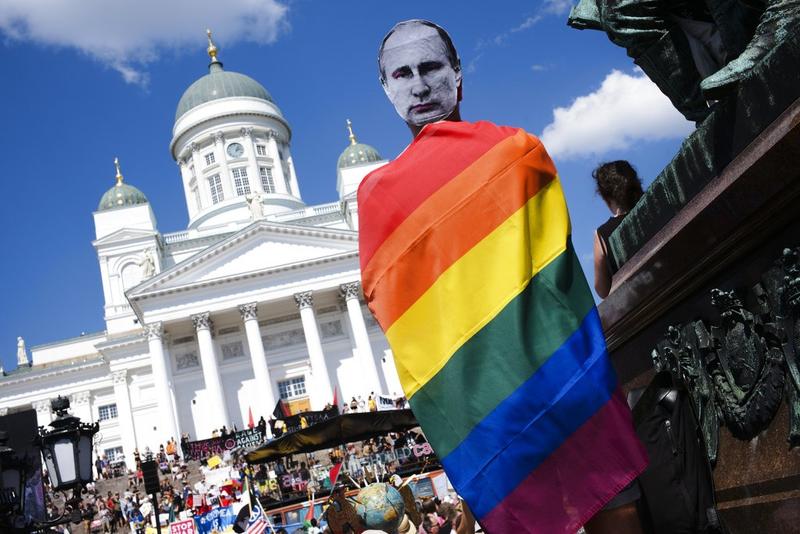 A man with a Putin mask and a rainbow flag attends a rally against the policy of US President Donald Trump and Russian President Vladimir Putin in central Helsinki, July 15, 2018. (MARKUS SCHREIBER / AP)

US President Donald Trump and Russian President Vladimir Putin will tackle some thorny bilateral and regional issues on Monday in a summit that experts say might halt a further worsening of their relationship but won't make any breakthrough.

Trump and Putin plan to meet one-on-one at the start of their first formal summit in Helsinki, Finland, on Monday afternoon, before allowing their aides to participate.

The Finnish president's office said the leaders of the United States and Russia will meet at the 19th-century Presidential Palace, near the city's waterfront Market Square.

Trump has ignored calls by leaders of the Democratic Party to cancel the summit following the Justice Department announcement on Friday of its indictment of 12 Russian military intelligence officers on charges they meddled in the 2016 US presidential election.

On Friday, Trump called the probe led by special counsel Robert Muller a "witch hunt". But he said, "I will absolutely, firmly ask" Putin if Russia was involved.

Trump has repeatedly said since his presidential campaign that he could have a good relationship with Putin.

"I think I would have a very good relationship with Putin if we spend time together," he said on Friday in a news conference with British Prime Minister Theresa May.

"We have a good relationship with Russia and with China and with other countries. That's a good thing, not a bad thing," he said.

Trump listed Ukraine, Syria and other parts of the Middle East and nuclear proliferation as some key issues for the talk.

While many believe the latest indictment would further dim the hope of any achievement at the summit, Charles Kupchan, a senior fellow at the Council on Foreign Relations, thinks it may not necessarily be the case.

"Trump will be angered by the new indictments and may well be even more determined to flout the investigation by cozying up to Putin," said Kupchan, who served as special assistant to the president and senior director for European Affairs at the National Security Council in the Obama administration.

He said the meeting offers the two leaders an opportunity to build a constructive relationship and lay out an agenda to improve relations.

"At the same time, the table is not set for a major breakthrough," he said.

Trump and Putin met twice before on international occasions but the Helsinki summit will be the first official standalone appearance for the two.

US Secretary of State Mike Pompeo and Russian Foreign Minister Sergey Lavrov will also meet at the Presidential Palace on Monday.

Despite the obstacles to better relations, Kupchan said he believes there are still areas where Trump and Putin may be able to find common ground, such as in Syria, Ukraine and arms control. "Progress in these areas is likely to be limited and incremental. Distrust remains high on both sides," he said.

ALSO READ: No room for sentiment as Trump visits UK

US news media and lawmakers have been talking about Trump's Russia connection during the past 18 months, restricting his room for maneuver on the issue, Kupchan said. "Nonetheless, even limited cooperative initiatives, if they are forthcoming, would be a useful start to decreasing tension between Russia and the US," he said.

Russian experts also sound cautiously optimistic. Nikolai Mironov, head of the Center for Economic and Political Reforms, said it is important to gain support for Russia from the US to have a better connection with the EU, both politically and economically.

Mironov said there is a good chance the two presidents will issue statements on some sensitive international issues, such as Crimea. "But we still hold doubts how much the US can change its position on the key issues," he said.

Alexei Zudin, a researcher from the Institute for Social, Economic and Political Studies, said Trump may need the talk more than Putin.

He said American companies that visit Finland with Trump desire to take political advantages out of the summit for their business in Russia. Trump will reach some agreement with Putin, as he wants to gain some profits for his American companies and voters.

Some experts are more pessimistic. Shen Dingli, a professor at the Institute of International Studies at Fudan University, said the summit can hardly accomplish a lot given the issues of Crimea and alleged election interference.

"The US Congress won't accept any resetting of Washington-Moscow relations. And, the rest of the G7 will not accept Russia's return as long as Russia keeps Crimea," Shen said.

Pavel Baev, a Norwegian scholar and a nonresident senior fellow at the Brookings Institution in Washington, said there are plenty of difficult and demanding matters from Ukraine and Syria to Korean Peninsula and Iran. "The problem is that real progress isn't possible on any of them," he said.

Bo Leung in Helsinki and Wang Mingjie in London contributed to this story.