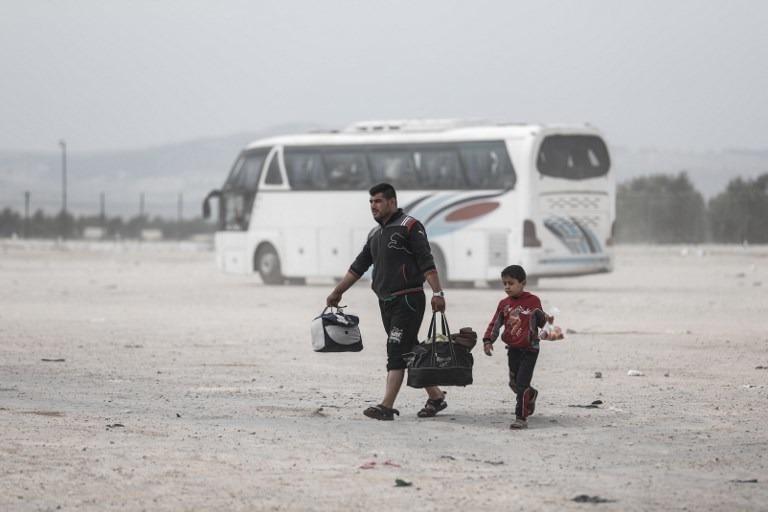 Members of a Syrian family evacuated from the town of Dumayr, east of the capital Damascus, carry their belongings as they walk away after disembarking from their bus in the city of Azaz in the northern countryside of Aleppo on April 20, 2018. (SAMEER Al-DOUMY / AFP)

UNITED NATIONS — Over 100,000 people around the world are missing, which has created a global "crisis," the International Committee of the Red Cross said Monday.

Agnes Coutou, the organization's protection adviser, told the UN General Assembly's human rights committee that "this is the highest number we have ever had."

"We know that this is the tip of the iceberg and that it represents only a fraction of those estimated to be missing because of past and ongoing conflicts," she said.

Coutou said three factors driving the crisis are the scale of armed conflicts responsible for a substantial number of missing; the "intergenerational impact" of people missing for decades on their families; and the increased internationalization of the problem.

"Missing persons shape the history of families, communities and societies profoundly," she said. "Such unresolved consequences of conflict that stretch over decades can hamper the prospects of peace."

Coutou said today's wars involve individuals and groups from a variety of countries, which multiplies the number of people affected and involved in missing person cases.

"The transnational dimension of the question of missing persons is particularly clear in its overlap with migration, as thousands and thousands of people fleeing conflict also go missing in transit and destination countries," she said.

Coutou said the International Committee of the Red Cross is calling for "early and preventive action" to keep people from going missing, "whether they are alive or dead." This means registering all people who are detained, enabling them to contact their families, registering and centralizing information on all those missing, ensuring identification of human remains, and protecting gravesites, she said.

Coutou said the organization is also calling for upholding families' right to know the fate and whereabouts of missing relatives and exchanging good practices and tapping into expertise on the missing.

She expressed hope that many UN member nations will respond and "help some of those who so desperately wait for news of their loved ones."