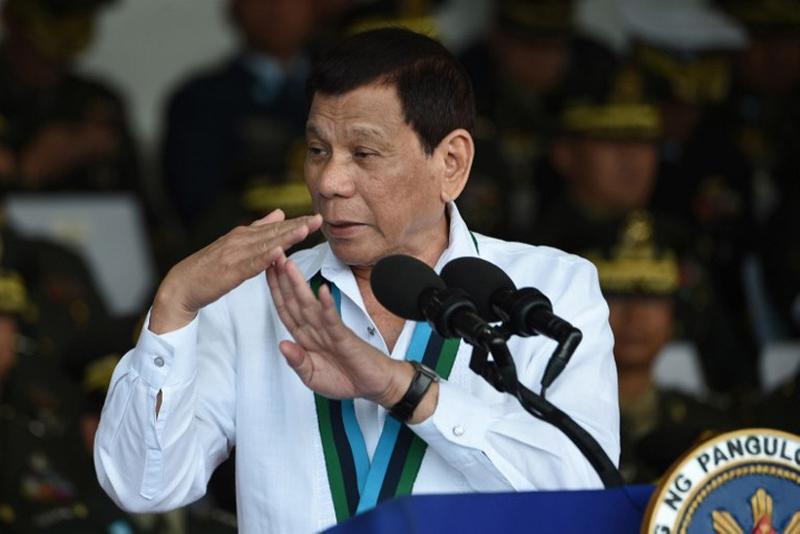 In this Dec 20, 2017 photo, Philippine President Rodrigo Duterte gestures as he delivers his speech during a ceremony marking the anniversary of the military at Camp Aguinaldo in Quezon City, suburban Manila. According to a presidential spokesman, the International Criminal Court had informed the Philippines that it has begun a preliminary examination of a complaint that accuses Duterte of crimes against humanity. (TED ALJIBE / AFP)

MANILA – The International Criminal Court (ICC) has informed the Philippines that it has begun a preliminary examination of a complaint against President Rodrigo Duterte that accuses him of crimes against humanity, his spokesman said on Thursday.

The examination of the complaint, which says Duterte is complicit in the illegal deaths of thousands of Filipinos during his war on drugs, was "a waste of the court's time and resources", presidential spokesman Harry Roque said.

About 4,000 mostly urban poor Filipinos have been killed by police in the past 19 months in a brutal crackdown that has alarmed the international community

Roque told a regular news briefing that he had discussed the issue for two hours the previous night with Duterte, a former prosecutor, who he said was more than willing to face trial.

"He's sick and tired of being accused," said Roque, a former Congressman and international law expert.

"He wants to be in court and put the prosecutor on the stand."

The ICC's website carried no announcement or information on Thursday concerning the complaint against Duterte. The court's office could not immediately be reached for comment.

About 4,000 mostly urban poor Filipinos have been killed by police in the past 19 months in a brutal crackdown that has alarmed the international community.

Duterte has many times dared the ICC to bring him to trial and said he was willing to rot in jail to save Filipinos from the scourge of crime and drugs.

His tirades against the court are notorious, and include calling it "bullshit", "hypocritical" and "useless".

He has threatened to withdraw his country's ICC membership and said lawyers in Europe were "rotten", "stupid", and had a "brain like a pea".

Police say those thousands of killings were during legitimate anti-drugs operations in which the suspects had violently resisted arrest. Duterte has repeatedly told police they can kill if their lives are in danger. 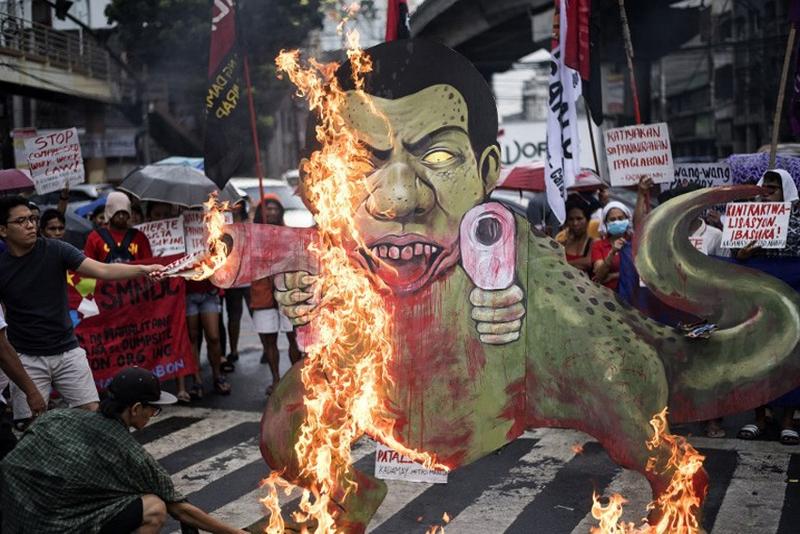 This Dec 8, 2017 photo shows activists burn a caricature of Philippine President Rodrigo Duterte as a gun-toting tyrannosaurus dinosaur in Mendiola near the Malacanang palace in Manila. (NOEL CELIS / AFP)

But human rights groups and Duterte's political opponents accuse him of inciting murder and say he refuses to investigate allegations that police are planting evidence, fabricating reports and executing users and dealers in cold blood.

Duterte and the police deny those accusations.

A Philippines lawyer filed the ICC complaint against Duterte and at least 11 senior officials in April last year, saying crimes against humanity were committed "repeatedly, unchangingly and continuously" and killing drug suspects and other criminals had become "best practice".

Roque said "domestic enemies of the state" were behind the complaint and the ICC had no jurisdiction when it came to the war on drugs, which was a sovereign issue.

Pending cases in the Philippine courts showed that domestic legal processes had not been exhausted, so the ICC would have no justification to go beyond its preliminary examination, he added.

Since it was established in 2002, the ICC has received over 12,000 complaints or communications, nine of which have gone to trial.