By Haky Moon in Hong Kong 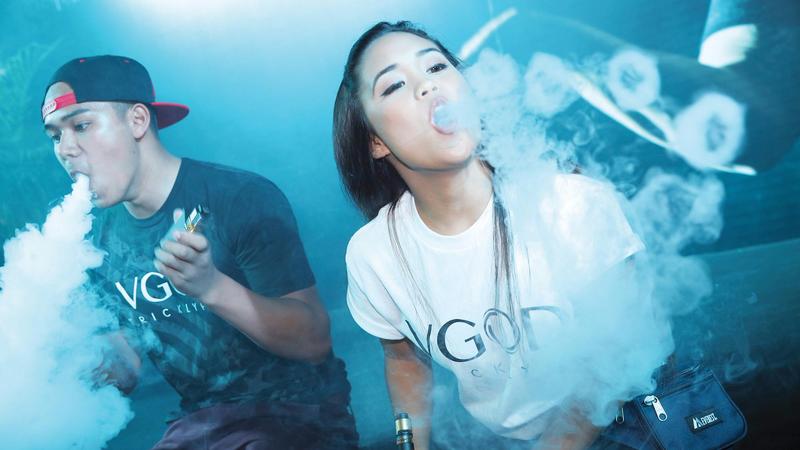 Exhibitors demonstrate their products at the Vape China Expo in Beijing in October. E-cigarettes face an uphill battle in China where tobacco and traditional cigarettes are cheap and smoking is deeply ingrained in the culture.  (IMAGINECHINA)

Sales of electronic cigarettes, known as e-cigarettes, are gathering steam in China, the world’s largest market for tobacco smokers. Potential profits there are mind-blowing, but pundits still wonder if the product can achieve sustainable popularity.

“We’re seeing China and Japan’s e-cigarette sales on the rise. We are definitely seeing more use of e-cigarettes in tier-one and tier-two cities in China,” said Nav Lalji, chairman of the Asian Vape Association, a not-for-profit organization comprised of consumers and supporters of the e-cigarette industry.

E-cigarettes are aimed at people who are trying to quit smoking. They use battery power to heat a liquid into vapor that users can inhale. The liquid usually contains nicotine mixed with certain chemicals, sometimes even with flavoring. Vaping is the act of inhaling and exhaling the vapor produced by the devices.

Smoking is deeply ingrained in Chinese culture, with more than half of all men in China being regular smokers. In fact, 44 percent of the world’s cigarettes are smoked in the country.

The country’s output volume of conventional cigarettes increased to 2,589 billion in 2015 from 2,447 billion in 2011, according to the Research Report on China’s Cigarette Industry, 2017-2021 by Research and Markets.

China is the largest producer and consumer of tobacco on the planet, with 315 million smokers in 2015 and 28 percent of all adults buying cigarettes.

Even a small amount of the revenue generated by the local tobacco industry would be hugely profitable for e-cigarette makers, who are touted as potential disruptors of the tobacco industry.

As well as being a mass producer of cigarettes, China produces 90 percent of the world’s e-cigarettes.

“The hardware of e-cigarettes is manufactured in China — particularly Shenzhen which is a mecca of e-cigarettes — while e-liquid is provided by Western and European companies,” said Lalji from the Asian Vape Association.

This division has come about partly because of regulations imposed on e-cigarettes in the United States and the European Union.

As of 2015, around two-thirds of major nations had some form of regulation in place on e-cigarettes. By then, countries such as Brazil, Singapore, the Seychelles, Uruguay and Norway had banned the product.

Encroaching regulations drove e-cigarette companies to turn their attention to developing markets, according to Lalji.

Lack of e-cigarette regulations in China helped sales of the devices increase around the same time regulations were introduced in other countries.

According to search engine data from Taobao, China’s largest online shopping website, there was a huge spike in searches for e-cigarettes in the second and third quarters of 2014.

In 2013, the Chinese sales volume for e-cigarettes surpassed US$14 million for the first time, and it was all through online sales. Since then, the sector has shown impressive growth, with online sales climbing to US$81 million in 2014 and US$266 million in 2016.

E-cigarette sales stood at US$448 million in 2015, according to Jackie Zhuang, a Chinese vapor industry consultant, who also said, however, that the exaggeration of sales figures can be common practice.

While the emerging market has made progress in China, it still has a way to go to.

“The reason we haven’t seen an e-cigarette boom in China is mainly because of the cost of traditional cigarettes being cheaper than e-cigarettes,” said Lalji.

In comparison, a pack of Marlboro cigarettes in Shanghai costs 21 yuan (US$3), and local cigarette brands can be cheaper. So, when even a brand-name cigarette can be almost 10 times cheaper than an e-cigarette, why would Chinese smokers make the switch?

“Another reason comes down to people not being educated enough,” said Lalji. “In China, many of the lower-tier cities consume cigarettes without thinking about it. Traditional cigarettes are cheap, and there is a lack of motivation to use e-cigarettes in China.”

In 2015, according to a report on tobacco prevalence in Suzhou, a major city in the eastern Jiangsu province, 47.6 percent of respondents were aware of e-cigarettes. However, only 1.6 percent had used them, while 81.8 percent did not believe they were much less harmful than traditional cigarettes.

There are mixed messages globally on vaping devices.

“What I can say now is that e-cigarettes are at least not harmless. We need more evidence over a long time to compare (them) to traditional cigarettes,” said Daniel Ho, an associate professor at the School of Public Health of the University of Hong Kong.

“We know that e-cigarettes are only generally regarded as less harmful than traditional cigarettes if you compare the short-term consequences,” Ho said.

It also does not help consumption that there is no leading recognizable brand of e-cigarettes. But all of this could change soon.

“Most of the big brand names are in China,” said McRae of The Vape Shop. “Big companies and better quality products are made in China. I can definitely say that the technology is much better and much more effective now in satisfying cravings as well as helping smokers to quit.”

Better technology is where the e-cigarette market could have an edge. After all, China is well positioned to be the perfect country for e-cigarettes to flourish. It has the largest population of smokers, no regulations on e-cigarettes and is the largest producer of the devices.

And according to the Global E-Cigarette & Vaporizer Market Forecast 2017-2027, a report by business intelligence firm VisionGain, the world revenue for the e-cigarette and vaporizer market is expected to surpass US$9.5 billion this year.

The report also noted that the China and India markets will continue to achieve high revenue growth through to 2027.

The report states this is due to the increasing sophistication of e-cigarettes, a reduction in cost over time, and increasing awareness of the devices as an alternative to conventional cigarettes.

In addition, according to a recent study on e-cigarette regulation in China, published in December 2016, for every 1 percent rate substitution of e-cigarettes for combustible cigarettes, the Chinese e-cigarette market will increase by almost US$5 billion.

For now, Chinese regulations on vaping have yet to be determined, meaning business as usual for e-cigarette manufacturers.