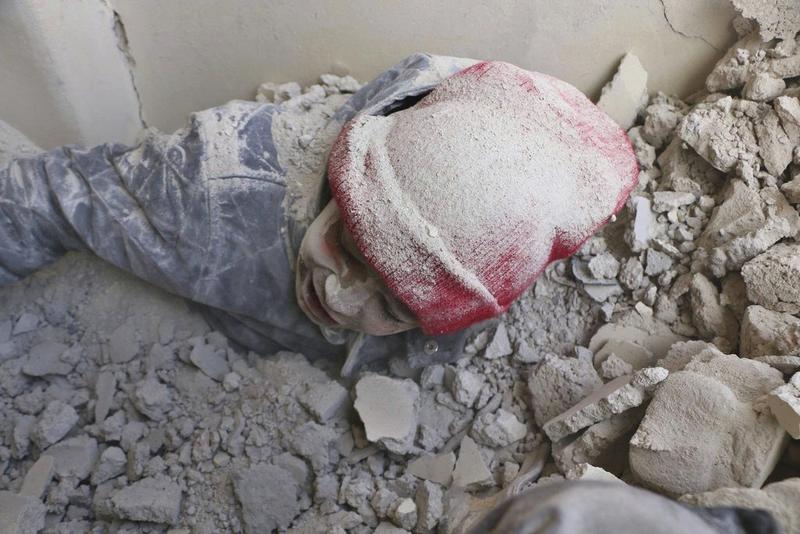 BEIRUT — Russian and Syrian government forces launched a new wave of airstrikes and shelling on Tuesday, plunging the besieged area just outside of Syria's capital of Damascus into a spiral of violence and despair.

At least 55 civilians were killed in what activists described as one of the deadliest days in the eastern Ghouta region in over a month. Ten towns, home to nearly 400,000 people trapped by the violence and a tightening siege, were bombed or shelled.

The United Nations called for an immediate, monthlong cease-fire in order to deliver critical humanitarian aid and medical care to civilians across the country.

Streets in the stricken area were covered in all-enveloping dust as one strike after another hit the same neighborhoods.

Images of blood-soaked children and adults competed with video of rescuers carrying white body bags or pulling survivors from the debris of destroyed homes. Sirens and wailing mixed with the relentless sound of airstrikes as residents of eastern Ghouta were unable to keep up with the onslaught.

One video showed a survivor with torn clothes and a bloody face running from a bombed building toward an ambulance. "Rescue me!" he yelled. 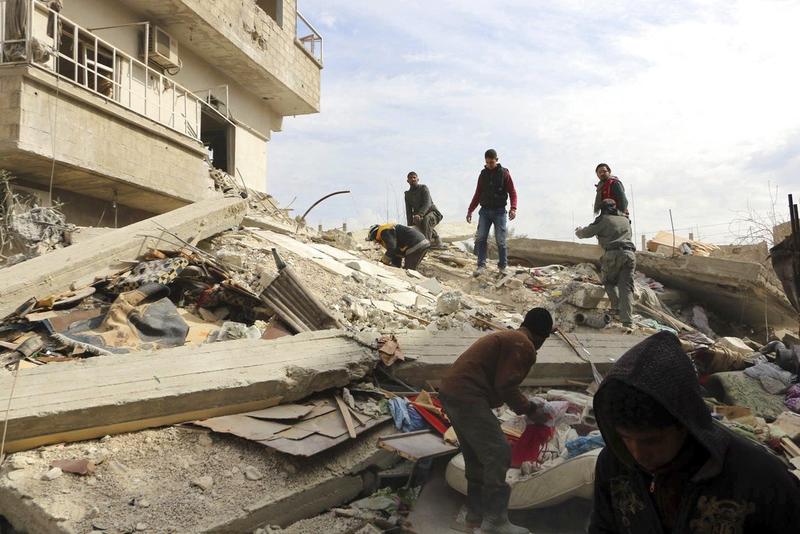 A visibly shaken man named Saeed emerged from a cloud of dust holding his infant son, Ibrahim, who had a streak of blood on his head. Saeed had managed to pull the 3-month-old child out of the wreckage of their home after an airstrike, according to Syrian Civil Defense workers, known as the White Helmets.

Nearly 200 people were wounded, and rescuers said many of those probably will not survive because of lack of medical supplies.

"Minute after minute, the number of casualties rises," a rescuer from the White Helmets said in a video from eastern Ghouta posted on the group's Facebook page. "No area at all in Ghouta is safe. ... We don't know what to say."

It was the second day of an intensified assault on the region. On Monday, at least 28 people were killed, while on Sunday, a suspected chlorine attack left a dozen people suffering from breathing difficulties.

The region has been under intense attack since the end of December as the government of President Bashar Assad struggles to bring it under control.

The White Helmets said they recorded 55 deaths on Tuesday, while many more were trapped under destroyed buildings. The Syrian Observatory for Human Rights put Tuesday's death toll at 70 in what it said was the highest it had recorded since December. The monitoring group said the campaign against Ghouta has killed at least 350 civilians, including more than 80 children.

The Syrian state news agency SANA said three people were killed in the government-controlled Old City in Damascus when rebels launched a series of missiles.

The punishing campaign by the Syrian government and its ally, Russia, has also battered the northwestern province of Idlib, the largest area under opposition control in Syria. The Idlib offensive hit hospitals and residential buildings and has intensified after militants shot down a Russian Su-25 fighter jet near the town of Saraqeb over the weekend. 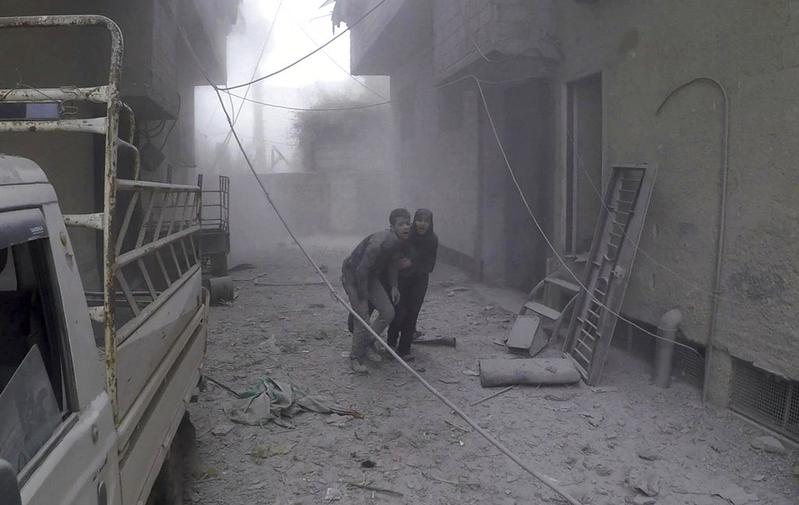 This photo provided by the Syrian Civil Defense group known as the White Helmets, shows two civilians fleeing from the scene of an attack after airstrikes hit a rebel-held suburb near Damascus, Syria, Feb 5, 2018. (SYRIAN CIVIL DEFENSE WHITE HELMETS VIA AP)

Activists say the campaign in Ghouta escalated after rebels there refused to join peace talks hosted by Russia last month.

The UN mission in Damascus warned Tuesday of "dire consequences" to the humanitarian crises in Syria, identifying seven areas needing urgent relief. The ongoing fighting and deliberate obstructions by forces were preventing aid organizations from reaching civilians, it said.

The lead investigator of a UN-mandated Commission of Inquiry on Syria said his team was looking into the reports that bombs allegedly containing weaponized chlorine were used on two recent occasions in the town of Saraqeb, in Idlib, and Douma, in eastern Ghouta.

In a statement, Paulo Pinheiro said the spiraling violence had made "a mockery of the so-called 'de-escalation zones'" — an agreement reached last year among Russia, Iran and Turkey to stabilize the lines of conflict and open corridors for humanitarian aid.

He described the government's siege and indiscriminate bombardment of eastern Ghouta as "international crimes."

Syria's multisided war has drawn in armies and insurgents from around the world, aggravating a conflict that began in 2011 as an uprising against Assad. Though he appears to have survived the insurgency, his forces continue to bomb and besiege opposition pockets across Syria, including in eastern Ghouta and Idlib.

The White Helmets said airstrikes Tuesday in the Idlib village of Termala killed three people. It said one of its workers was killed by an airstrike while attempting a rescue in the area.

Meanwhile, Turkish operations against Syrian Kurdish forces have compounded the suffering in northern and eastern Syria.

At least three displaced people in a camp near the Turkish border were killed when the Kurdish militia fired missiles at the area from an enclave they control that has come under Turkish assault. An offensive by Ankara to rout US-backed Syrian Kurdish fighters from the northern enclave of Afrin is now in its third week.

Turkey's military said a Turkish soldier was killed in an attack in Idlib, where its troops are establishing an observation post. Turkey began deploying forces in an observer role to rebel-held Idlib in October as part of the "de-escalation" agreement.

The military said the soldier was killed Monday by a mortar-and-rocket attack that also wounded five Turkish soldiers and a civilian military contractor.