US meddling in HKSAR affairs opposed 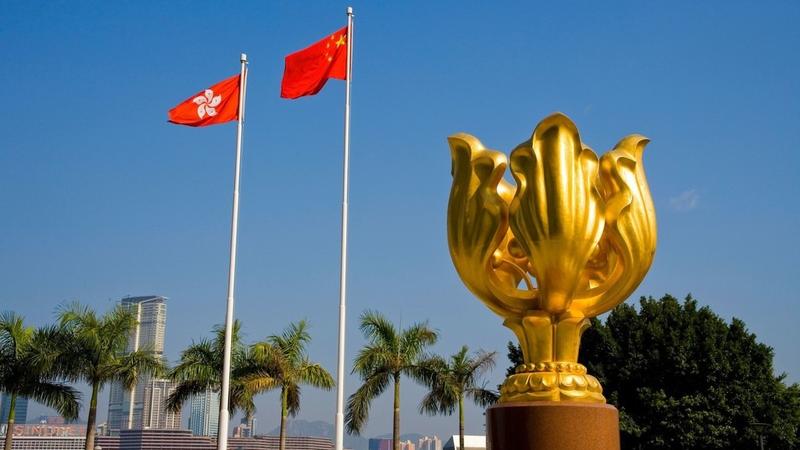 HONG KONG - The Commissioner's Office of the Foreign Ministry in the Hong Kong Special Administrative Region has expressed strong disapproval of and firm opposition to a report released by the US-China Economic and Security Review Commission.

In a statement released on Friday, a spokesperson for the office said the report grossly distorted the truth and made unwarranted remarks on Hong Kong.

The report has provided more solid evidence that the anti-China forces in the US are exactly the black hand behind the chaos in Hong Kong, who have been caught on the spot

Commissioner's Office of the Foreign Ministry in the HKSAR

“The report is full of lies and biases. When it comes to Hong Kong, it turns a blind eye to the escalating crime by the black-clad rioters, and says nothing about the fact that innocent citizens have been assaulted, Hong Kong's prosperity and stability damaged, and the rule of law trampled upon. On the contrary, it fires allegations at the SAR government's just efforts to govern in accordance with the law, protect citizens' rights and maintain law and order, and even accuses the Central Government of ‘intervening in Hong Kong's affairs’. The report has confounded right with wrong, has no credibility whatsoever, and is an epitome of hegemonic mindset and gangster logic,” the spokesperson said.

The spokesperson said that in intimidating the SAR and relevant businesses and individuals by suggesting enacting legislation, the report has laid bare the evil intention of anti-China forces in the US to endorse the troublemakers in Hong Kong, cheer the violent radicals, and prolong the unrest in the city. The report has provided more solid evidence that the anti-China forces in the US are exactly the black hand behind the chaos in Hong Kong, who have been caught on the spot.

The spokesperson emphasized that Hong Kong is part of China, and its affairs are completely China's internal affairs. The Chinese government is rock-firm in safeguarding national sovereignty, security and development interests, in implementing the policy of "one country, two systems", and in opposing any foreign interference in Hong Kong affairs.

“We again urge the relevant American politicians to immediately stop meddling with Hong Kong affairs. China's territory is not somewhere foreign forces can run wild,” according to the statement.

In response the report, the HKSAR government reiterated late on Thursday that foreign legislatures should not interfere in any form in the internal affairs of the HKSAR.

Since its return to the motherland, Hong Kong has been exercising "Hong Kong people administering Hong Kong" and a high degree of autonomy in strict accordance with the HKSAR Basic Law, a spokesman of the HKSAR government said in a statement issued on Thursday. "The 'one country, two systems' principle has been fully and successfully implemented. The HKSAR government will continue to implement the 'one country, two systems' principle resolutely in accordance with the Basic Law."

Any suggestion for "Hong Kong's independence" is a blatant violation of the Basic Law and a direct affront to the national sovereignty, security and territorial integrity of the PRC, according to a HKSAR government spokesperson

"At the same time, the HKSAR government has a duty to implement and uphold the Basic Law and to ensure that all elections will be conducted in accordance with the Basic Law and relevant electoral laws. There is no political screening," he added.

Referring to the Basic Law which clearly stipulates that the HKSAR is an inalienable part of the People's Republic of China (PRC), the spokesman pointed out that any suggestion for "Hong Kong's independence" is a blatant violation of the Basic Law and a direct affront to the national sovereignty, security and territorial integrity of the PRC.

"'Hong Kong's independence' runs counter to the successful implementation of 'one country, two systems' and undermines the HKSAR's constitutional and legal foundations as enshrined in the Basic Law. Relevant international human rights convention and court cases have clearly pointed out that freedom of speech is not absolute," he said.

"Article 63 of the Basic Law entrenches the constitutional principle of prosecutorial independence. The conduct of all criminal prosecutions of the Department of Justice (DoJ) is free from any interference. Decisions to prosecute or not, as the case may be, must be based on an objective and professional assessment of the available evidence and the law, and be in accordance with the published Prosecution Code. No political consideration is being taken into account at all," he said.

In respect of the Fugitive Offenders and Mutual Legal Assistance in Criminal Matters Legislation (Amendment) Bill 2019 (the Bill), the spokesman said HKSAR Chief Executive Carrie Lam Cheng Yuet-ngor announced on June 15 that the bill was suspended and later made it clear that all the legislative work had come to a complete halt. The chief executive further announced on Sept 4 that the HKSAR government would formally withdraw the Bill and the secretary for security withdrew the bill at the Legislative Council meeting on Oct 23.

"In the past few months, there were a series of protests and public order events in Hong Kong. Some of them eventually became violent and illegal incidents, causing damage to district and community facilities as well as injury to members of the public. In response, the police have been exercising restraint and have been carrying out enforcement actions in strict accordance with the law," he said, stressing that the purpose of police's enforcement actions is to protect the life and property of the general public, bring offenders to justice and restore public order as soon as possible.

Concerning constitutional development, the spokesman said to achieve the ultimate aim of universal suffrage enshrined in the Basic Law, the community needs to engage in dialogues, premised on the legal basis and under a peaceful atmosphere with mutual trust

The Independent Police Complaints Council is conducting a fact-finding study on the handling of large-scale public order events since June, including corresponding actions by the police, to ascertain the facts and will prepare a report. The content of the report will be made public.

The HKSAR government has also launched a diversified dialogue platform and will invite community leaders, experts and academics to conduct an in-depth and independent examination of the social conflicts in Hong Kong and the deep-seated problems that must be addressed.

Concerning constitutional development, the spokesman said to achieve the ultimate aim of universal suffrage enshrined in the Basic Law, the community needs to engage in dialogues, premised on the legal basis and under a peaceful atmosphere with mutual trust, with a view to narrowing differences and attaining a consensus agreeable to all sides.

"The HKSAR government will assess the situation carefully and take forward constitutional development in accordance with the Basic Law and the relevant Interpretation and Decisions of the Standing Committee of the National People's Congress."

Regarding strategic trade control, the spokesman said that Hong Kong, as a separate customs territory under the Basic Law, has been implementing comprehensive control on import, export and re-export of strategic commodities in accordance with the laws of Hong Kong and international control lists, carrying out rigorous enforcement, and maintaining close cooperation with the United States and other trading partners.

"Over the years, we have been closely collaborating with the US administration and achieved satisfactory results in preventing illegal diversion of strategic commodities. Our efforts in this regard are recognized by the relevant authorities. We regret deeply that despite our repeated explanation, the report has still erroneously cited a totally irrelevant case to cast doubt on Hong Kong's strategic trade control system," he said.