By Shadow Li and Zhou Mo

Hong Kong has been known for generations as the place where East meets West, but that title took on even greater importance when the city became the gateway to the world’s biggest market. Shadow Li and Zhou Mo report.

Editor’s note: As the People’s Republic of China prepares to celebrate its 70th anniversary on Oct 1, China Daily is featuring a series of stories on the role regions have played in the country’s development and where they are today.

The world stood in awe of the Chinese miracle, evolving over the past 70 years. The return of Hong Kong to the motherland in 1997 under the “one country, two systems” principle became part of that miracle.

Reform and opening-up, started in 1978, was a formula devised by Deng Xiaoping, the late architect of the economic endeavor.  It raised the curtain on a bold future for Hong Kong and Macao as part of the miracle. The stage was set for the two special administrative regions to play key roles in a market of over 1 billion people.

Entrepreneurs had already been preparing the groundwork. Many had strong familial links across the boundary in Guangdong, and were motivated by the desire to reconnect with their roots.

(The Belt and Road Initiative) promises larger and more lucrative markets for Hong Kong. It also sent out a clarion call to more traditional Hong Kong enterprises, that it was time to modernize and improve their competitiveness or risk being left behind

“In the first 30 years of the seven decades since the founding of the People’s Republic of China in 1949, many businessmen from Hong Kong maintained their attachment to the motherland, despite the hiatus on trade. They donated money for building roads, constructing bridges and setting up schools,” said Jonathan Choi Koon-shum, chairman of the Hong Kong Chinese General Chamber of Commerce.

Choi was one of them. The son of Choi Kai-yau, dubbed as “the seafood king” in Hong Kong, was born in Macao, grew up in Hong Kong and made his fortune on the mainland.

In 1978, Choi, a young maverick who had just taken over the Sunwah Group from his father, decided to donate money to build a school in Zhongshan, where his family came from.

The familial link, not lucrative at the time, later proved to be a wise move. In 1978, Choi invested HK$40 million in a fishing fleet, for compensation trade in Zhuhai and Zhongshan. Local authorities used his investment to build ships.  In return, they provided Choi with seafood.

Local fishermen couldn’t get the job done and the venture failed. In those days, everything produced in people’s communes (1958-83) was to be shared equally by all.

Things changed after Choi decided to take money as compensation instead. The fishermen were asked to pay Choi an agreed amount. Whatever they earned from selling the fish over and above the set amount went into their pockets.

“When I saw coastal cities like Zhuhai lined with small, brick houses, instead of squatter huts, I felt proud of myself,” said Choi. His patriotism took him a long way in his future endeavors on the mainland.

Things started falling into place for Choi. He made his way from Zhuhai, in southern China, to Shanghai and Dalian on the east coast.

He completed his value chain, opening shrimp farms and processing factories, and began exporting his products.

Choi’s success in business funded ongoing charity efforts on the mainland. Scholarships, teaching buildings and even colleges bearing the Choi name sprung up in about half a dozen universities across China. In 1995, he donated 6 million yuan (US$842,000) to create a foundation that provides subsidies to members of the Chinese Academy of Science over the age of 80. Later he injected another 10 million yuan into the fund. The late Chinese nuclear physicist, He Zehui, married to the “father of China’s atomic bomb”, Qian Sanqiang, was among the beneficiaries.

Choi is a living embodiment of the unwavering commitment from Hong Kong that’s contributed to the nation’s reform and opening-up.

When meeting a delegation from Hong Kong and Macao celebrating the 40th anniversary of the economic reform, President Xi Jinping said Hong Kong and Macao, from their unique positions, have played indispensable roles in the nation’s reforms.

During the same celebrations, in November, in Beijing, five of Choi’s compatriots from the two SARs were recognized for their outstanding contributions to the country’s advancement.

Since the reform and opening-up, Hong Kong has been the largest contributor of overseas direct investment on the mainland. According to the Ministry of Commerce, by the end of 2018, Hong Kong contributed more than US$1.1 trillion in cumulative value of external capital to the mainland, accounting for 54 percent of total external direct investment.

People like Choi brought in more than just capital. They created millions of jobs on the mainland and brought in talents, market sector standards, market philosophy and management systems to the country. These contributors from Hong Kong became a principal force participating in the nation’s economy over the past 70 years.

READ MORE: City a class of its own in nation’s economic miracle

China has risen up and become the world’s second largest economy. Between 1979 and 2008, the Chinese economy posted an average GDP growth of 9.8 percent, 6.8 percent higher than the average for worldwide growth rate at that time. That’s the economic miracle that has lifted 800 million people from poverty over the past four decades.

A stronger China has given the Hong Kong SAR strong backing. At every turn, the central government has lent a helping hand to the city, most notably during the Asian financial crisis in 1998, and the SARS epidemic in 2003, which was followed by the signing of the Mainland and Hong Kong Closer Economic Partnership Arrangement, a major trade arrangement benefiting Hong Kong. 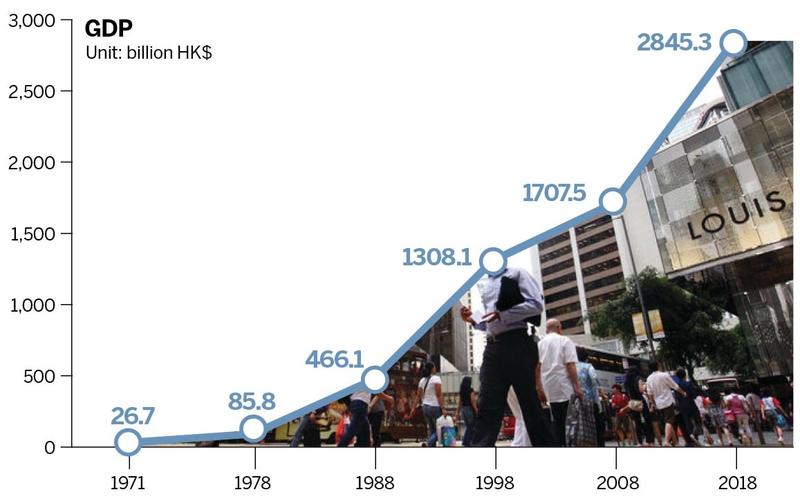 The “one country, two systems” principle made it possible for the Hong Kong SAR to maintain its capitalist system and way of life, while the Chinese mainland continues on its course of socialism, with Chinese characteristics.

“One country, two systems” is a pioneering initiative that has no precedent, President Xi said at the celebration of the 20th anniversary of Hong Kong’s return to the motherland and the inaugural ceremony of the fifth-term SAR government in 2017.

The application of the principle, widely believed to be generally smooth and successful, has met “some new developments and new issues”.

One of the latest references to the new issues is the months-long unrest that has rocked the city since June 9. The turmoil, sparked by an extradition law amendment bill, has turned into an anti-government movement, with some blatantly challenging the “one country, two systems” principle.

The solution, as foretold by Xi, is for Hong Kong to improve its systems to uphold national sovereignty, security and development interests. It needs to enhance education and raise public awareness of the history and culture of the Chinese nation, he elaborated in the speech.

Nevertheless, the “one country, two systems” arrangement gave rise to many of the nation’s groundbreaking ventures by Hong Kong enterprises, including the Zhongshan Hot Springs Resort, the first hotel funded by overseas capital, and its first joint venture — Beijing Air Catering.

Capitalizing on the booming manufacturing industry on the mainland, Hong Kong, the former fishing port, evolved from low-end manufacturing into a top-of-the-line service-oriented economy.

“This paved the way for Hong Kong’s successful transformation into an important bridge linking the mainland and the global market, and enabled Hong Kong to establish and reinforce its present position as an international commercial, logistics, shipping, financial and professional service center,” said Hong Kong Chief Executive Carrie Lam Cheng Yuet-ngor in October 2018.

The development route of Hong Kong can also be viewed through the career trajectory of Wong Ting-chung, chairman and chief executive of Nameson Holdings. The textile tycoon was able to turn his six-member family workshop into a listed company engaged in many sectors.

Wong credits his success to the reform and opening-up and the fast-taking-shape Belt and Road Initiative.

Established in 1990, the company, with a peak employee of 14,000, was first relocated in Dongguan and Huizhou in 1992 and relocated again to Vietnam and Cambodia, two countries involved in the BRI.

The grand vision, inaugurated by President Xi in 2013, aims to enhance trade and economic integration across Asia, Europe and Africa, covering some 65 countries and regions.

ALSO READ: A door to the future for Hong Kong’s young people

The BRI promises larger and more lucrative markets for Hong Kong. It also sent out a clarion call to more traditional Hong Kong enterprises, that it was time to modernize and improve their competitiveness or risk being left behind, Wong said.

A turning point has been reached in the reform and opening-up, said Choi. In the next 40 years comes the time when Hong Kong and Macao must focus on helping home-grown companies from the mainland to break into the world markets, to assist them to transform and upgrade.

The 40 years of remarkable economic growth essentially has laid the foundation for the Guangdong-Hong Kong-Macao Greater Bay Area. The city cluster is made up of nine cities in Guangdong and the two SARs. Guangdong, the world’s factory, stands poised to transform and upgrade itself.

The labor-intensive factory structure cannot survive for much longer. The time approaches when high-tech manufacturing, both eco-friendly and highly cost-efficient, must take over, Choi said.

Choi’s vision has been vindicated by young entrepreneurs like Chan Kit-chan from Macao, capitalizing on the industrial upgrades of the Bay Area.

Its AI safety-control system is programed to detect risky behavior on the factory floors, such as not wearing proper work clothes or safety helmets, straying into working sites, etc. It can also be on guard against fires.

So far, the company has struck partnerships with more than 1,000 customers in retail, security, firefighting and other sectors, including top-shelf brands Calvin Klein and home-grown companies like Shenzhen Metro.

Chan’s company nearly failed in Macao in 2013 after failure to secure funding there.  It, however, quickly secured about 3 million yuan after relocating to Shenzhen in 2015.

The BRI and the Bay Area are two major national strategic plans announced since President Xi took the helm in 2012. The visionary plans, bearing the same daring imprint of tearing down the old in the spirit of change, are aimed at gaining greater economic potential. Both are viewed as great opportunities created by the central government for Hong Kong to integrate into the nation’s development.

The report of the 19th National Congress of the Communist Party of China, in October 2017, signified a series of policies targeting closer integration. Since then, many new initiatives have been rolled out to make way for SAR residents to live, work and study on the mainland. The new policies offered support for housing, education, employment, travel and other basic services.

In May 2018, President Xi issued instructions to provide further support for Hong Kong to transform into an international innovation and technology hub. Following that, major national grants in science and technology were made directly available to Hong Kong and Macao scientists. Months later in August, residence permits for Hong Kong, Macao and Taiwan residents living, working and studying on the mainland were announced to facilitate even closer integration.

These measures are expected to boost feelings of belonging and security for young people from the three regions, Choi said.

After the 19th National Congress of the CPC, the country held a clearer blueprint for its development in the new era. The new initiatives stirred some concerns in the United States, where efforts have been made to contain China’s development by all means, Choi said.

In noting the changing global situation, Choi called on the city’s youth to set aside differences, saying it is time to consider the big picture now, as Hong Kong is an inalienable part of China’s big picture.